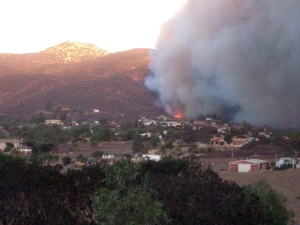 Effective immediately, the U.S.  Bureau of Land Management has banned recreational shooting g on all BLM lands in San Diego’s East County and the South Coast areas for the remainder of fire season.

“Collectively our staffs have discussed our emerging potentially very dangerous fire season given the prolonged drought,” Clayton R. Howe, Battalion Chief with the BLM, wrote in an email sent to County Fire Authority Acting Chief Greg Griswold on May 23. “We have also sought to reduce the threat of wildfires related to recreational shooting on BLM Administered Public Lands located within your Units.”

Cal Fire Chief John Francois, in an e-mail sent to fire officials and community leaders across our region, stated that fire agencies now have the authority to enforce the restriction on shooting.  “If you see anyone shooting, please contact your local law enforcement agency,” Chief Francois urged.

Robin Brailsford, a Jamul resident who has pushed for a ban on shooting after six fires in the Jamul area were linked to shooting on BLM lands, called the announcement “good news.”

There was a designated shooting area near Cameron Station in the East County that was safe because a hill prevented rounds from going astray, most of the time. The place was popular and many people were using hand guns, shotguns or semi auto rifles, a good place to shoot and practice or maybe sight in a new scope. When the site opened the users were mostly target and trap shooters. Then, as word spread it became a free fire zone and people brought refrigerators, TV's, car doors, propane tanks and glass bottles for targets. The area became a mess. I'm not against gun owners and this was when banana clips and 20 round pistol magazines were legal. Me and my sons stopped a mile away from the place on our way to a favorite stream to take a short break when I heard the sound of a bullet in the air and then a thud when it impacted, that close. If there isn't a legal shooting area people will find a remote place to use and that increases the risk of some kind of injury or damage. Private ranges can be expensive and might not be available to some.
There are no legal recreational shooting areas left in San Diego County within public land so the ruling is meaningless. The last place that you could shoot on BLM land in this county is now controlled by SDG&E for the new power connection station at Jacumba. How about banning the BLM from using their staff vehicles off road during the fire season? Catalytic converters can and have caused fires..(wasn't this the cause of the July 2013 Mount Laguna fire which started on BLM land?).
Restricting shooting during our current drought was a smart move by the BLM. Why don't they make another smart move and apply that same rationale to constructing and building wind turbine/solar farms, transmission lines, and substations in our East County? The Bernardo Fire was caused by construction equipment. A malfunctioning wind turbine has already started a brush fire at the Kumeyaay wind farm. Isn't that enough proof?