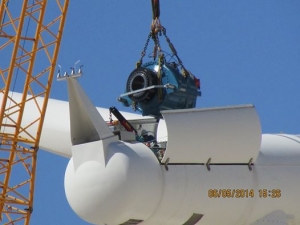 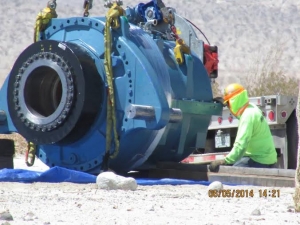 “It’s very frustrating when we ask about work being done and we don’t get an answer or we get the generic ‘It’s just general maintenance,’" said Jim Pelley. "If they are still repairing these blades it tells me that there is some serious safety issues that we have the right to know about.”

He lives in Ocotillo, California, which is surrounded by turbines on three sides.

The project went online in December 2012 and, since then, crews are said to be working 16 or more turbines during a 24 hour period.

The first gear box was replaced on April 1, 2013 - four months after the project went online. 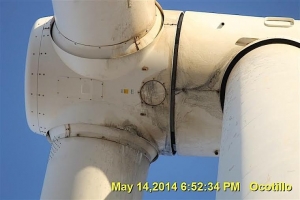 That day Jim Pelley wrote, "It seems like every day the Siemens workers are working on the turbines. Before these turbines went on line I asked a manager on the project site how much maintenance was required on these Siemens turbines. The answer I got was “These Siemens turbines are the Rolls Royce of the wind turbines and it’s pretty much like you car you have to change the oil once in a while but that’s about it”. Hmm, if I bought a car for $3,000,000.00 dollars and the gear box went out after 4 months of light duty I would not be a happy camper."

Another gear box was replaced on June 5, 2014.  Ocotillo resident Parke Ewing wrote on his facebook page, "The temperature was 113 degrees today. It was difficult to simply stand and take photos, much less work in this heat. The technicians up in the nacelle were working with hatches open and in direct sunlight. The crane operator had no air conditioning. The ground crew was able to work without mistakes... Hats off to all of you. But, Pattern Energy still sited this project too close to residents... "

One of the project workers responded, "Yes it was, it was pretty Damn windy setting the new gearbox." 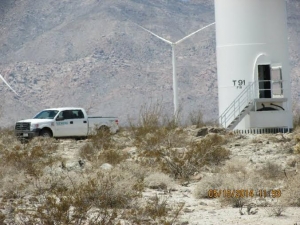 Many of the turbines leak oil. After learning that the reason turbine #87's gearbox had to be replaced was that the old one was cracked, Parke Ewing questioned whether this might be what is causing all the leaks?

It has been a little over a year since a 173 foot long blade went flying off one of the turbines.

Pelley says they have replaced the blades on nine turbines and the rest have undergone a "root upgrade kit." This consists of drilling holes in the root of the blade and then fastening it with glue and bolts. (Watch a workman doing one in the video below)

Parke Ewing recently sent me the following description of  what it is like to be surrounded by a Wind Farm: 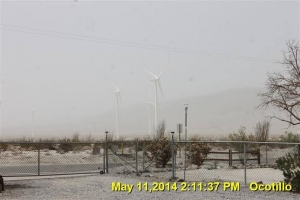 "As you know living in the middle of this facility has not been easy, in fact it has been and continues to be very upsetting. We are very suspicious of unusual work activity out here, especially anything that could be related to the turbine blades. Since many of the workers have had past experience with a fiberglass and composition company, it is obvious that work is occurring on the turbine blades. Airway Services appears to have up to 8 crews working at night. We can hear sanding and grinding noises coming from the turbines. Are fiberglass particles being released into the air? We believe that tyvek suits are supplied by the Alsco company for the hazardous dust protection of the workers, so we presume that residents can also be exposed to fiberglass dust. Is the BLM or the county aware of this work?

"The oil leaks seem to be continuing not only from the nacelle/tower area, but also from the hub area. We hope that Pattern Energy is accountable for these leaks? When will the leak problems be solved? 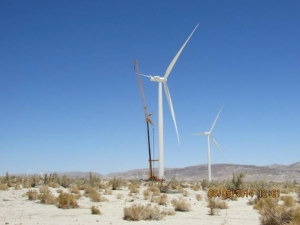 "The noise is still a problem, whether it is at or below some decibel level that was predetermined to be within compliance of some standard that the wind industry has deemed acceptable, it is very annoying at times and I am sure that the speed of the turbines, that directly surround my home, could have their parameters modified during these conditions to make less noise. We are now very suspicious that sound recording levels in Ocotillo could have been manipulated prior to the DEIR/FEIR. For example, at a sound receptor test site, a vehicle could have purposely been driven past a recording device to raise the ambient sound levels of that receptor, just enough to make it appear that the increase in noise in a rural area would not be so dramatic. To us the noise is at times overwhelming and we can't understand how this noise can be acceptable.

"The bright red blinking lights are still an issue, we can't and don't enjoy the very reason that we built our home here in Ocotillo. We are confined to the inside of our new prison home at night time when most people that live in the desert like to get outside and cool off. We are doing our best to plant trees and try to block some of the lights, but trees don't grow tall very quickly.

"What can the BLM do to make us more comfortable and safe in our home with the continuing nuisance and hazards of these wind turbines? Has the BLM even noticed that not one of the Ocotillo Wind workers live or stay here in Ocotillo on their off hours? Besides Ocotillo being an undesirable location to many, living near your work would normally have its advantages...

My husband and I used to camp, hike, star gaze, take photos, and just enjoy the Great Outdoors around Ocotillo. Not any more. We haven't used S2 since the wind farm was built because they are already so disgusting to look at just driving by on Hwy. 8 to the River, especially when they aren't turning to produce the energy that was promised. The blinking red lights at night are disturbing and seem to send a visual signal to "stay away". At least we have photos and memories of how beautiful and great it was before it was ruined by those gigantic wind turbines that now, unfortunately, dominate the landscape. I'm sure Ocotillo misses the business from people like us who don't support the local businesses by spending time there any more.
Keep the pressure on Pattern and the BLM and SDGE. Tyvek coveralls. I used them at work for years. They are just a single use piece of PPE. Personal Protective Equipment. Like a dust mask or ear plugs you use them once then they are discarded. To the trash. They are not a Hazmat suit or something bad, just disposable clothes to protect workers from dirt and grime. I have camped near and visited the Ocotillo area for years, I am sad to see our desert trashed like this. Tom http://www2.dupont.com/Tyvek/en_US/uses_apps/apps_landing.html N95 Dust Mask http://www.envirosafetyproducts.com/3m-particulate-respirators.html
Merely to keep pace with growing energy needs, wind farms would have to be built at a rate that would cover a land mass the size of Italy, EVERY YEAR. http://online.wsj.com/articles/robert-bryce-dreaming-the-impossible-green-dream-1402527502