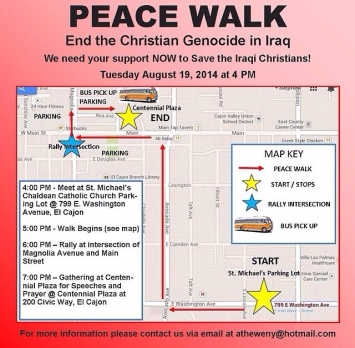 Marchers will meet at St.Michael’s Chaldean Catholic Church (799 E. Washington Ave.) at 4 p.m. Tuesday with the march starting at 5 p.m.  At 6 p.m., a rally will be held at the intersection of Main Street and Magnolia downtown, followed by a gathering at 7 p.m. at Centennial Plaza (200 Civic Way), where Arabo will deliver a keynote address to Chaldeans worldwide.

“We must let the world know that we continue to watch as our brothers and sisters in the Middle East are persecuted, displaced, and killed simply for being who they are,” said Arabo, president of the Neighborhood Market Association locally as well as a national spokesman for Chaldean-Americans. "It is time we take a stand right from our doorstep, in El Cajon.”

Arabo has held meetings with the United Nations, Congressional leaders and the White House.  On August 15, the United Nations Security Council unanimously passed a resolution to impose sanctions on all who finance, supply or recruit for ISIS. Arabo also helped draft a resolution passed by the House that urged President Barack Obama to protect Iraq's Christians and other minorities, shortly before the President approved airstrikes and humanitarian aid.

Arabo praised the U.N. resolution as a “monumental act” adding, “It is our moral responsibility to stop the onslaught of this rapidly growing organization and that begins with a policy of containment.” He said efforts to limit the impact of ISIS are starting to prove effective and said the next step must be “ridding them form countries throughout the Middle East.”

Today, Reuters reports that U.S. and Kurdish officials report that Kurdish and Iraqi forces have recaptured a dam seized by ISIS near Mosul with help from air strikes launched by the U.S. military.  An employee at the dam disputes this, Reuters indicated. The dam has been called the most dangerous dam in the world, capable of flooding two major cities and killing thousands of people if breached or destroyed, sending floodwaters all the way to Baghdad.

Chilling reports have emerged of ISIS beheading and torturing those who refuse to convert to Islam. Christians and other minorities have fled for their lives.  Tens of thousands of Yezidis, an ancient religious group predating Christianity and Islam, were left trapped on a mountaintop where reports have surfaced that ISIS buried some people alive in mass graves, also kidnapping and selling women and children into the sex trade. One eyewitness told of seeing ISIS militants tie a woman to two vehicles and tear her in half.

Some survivors have reportedly been rescued by Kurdish forces, but others reportedly remain trapped. Reports vary widely on just how many have escaped to freedom and how many lives are still at eminent risk.

In addition to air strikes against ISIS forces, the U.S. made humanitarian aid airdrops in northern  Iraq, but President Obama has indicated those drops may end soon.  Arabo called that announcement “disappointing” given that estimates show that “about 1.5 million have been displaced into northern Iraq since the onslaught of ISIS began.”  Arabo pledged to continue pushing the Obama administration to facilitate airdrops into areas where Iraqi Christians and other minorities are most at need.

In another major development, Iraqi Prime Minister Nouri al-Maliki has announced his resignation. Haider al-Abadi, also a Shiite but viewed as less confrontational than Maliki, has been appointed Prime-Minister designate and aims to form a government that will include leaders of Iraq’s principal minorities with a goal of forming a united front against ISIS.

Arabo called the replacement of Maliki a “small step forward for the future prosperity of Iraq.” He said his coalition hopes to work with the reconstructed government “to ensure a secure home for those who wish to stay in the country, and safe passage for those who would like to leave.”

While a change in leadership is important, he observed, “the long term stability of Iraq must begin from the bottom up. It is imperative for the newly formed government to break the sectarian divide and supply equal representation, so that such a tragedy never occurs again.”

Please join the march. It's a great opportunity to show our political leaders how many of us demand an end to the slaughter of Christians and others in Northern Iraq.
Why has not the rest of the "free" world stepped up to stop this carnage by ISIS? SHAME! Is the lack of courage the latest export from our once great America? My Grand Children will never know the country of my fathers who saved the World from tyrants, twice.