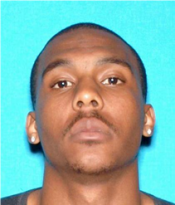 September 1, 2014 (San Diego’s East County) – A reward of up to $1,000 is offered by Crimestoppers for information leading to the arrest of Tavarris Deshawn Garcia.

An arrest warrant has been issued for Garcia in connection with a 2013 robbery attempt in Vista.  Garcia has a record of assaults, according to a statement issued by the Sheriff’s department.  He is known to frequent El Cajon, La Mesa, Logan Heights, Oceanside and Vista. He may also be in Las Vegas, according to investigators with the Sheriff’s Fugitive Task Force.

Anyone with information on the location of this suspect should call the Crime Stoppers anonymous tip line at (888) 580-8477. Anonymous email and text messages can be sent in via www.sdcrimestoppers.com.

One thousand dollars seems like a lot of money but the "bounty" is taxable income so you would pay $250.00 on your income taxes. The money should be tax exempt.