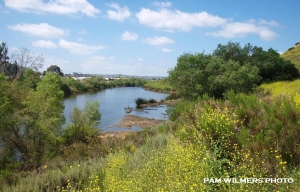 October 22, 2014 (Santee)--The city of Santee has scheduled a groundbreaking ceremony for 9 a.m. Thursday, Oct. 23 to mark the beginning of construction of a new 1.3-mile-long multi-use recreational trail along the San Diego River known as the Walker Preserve Trail Project.

“This project, the result of a partnership between the City of Santee and the San Diego River Conservancy, adds 107 acres to our open space inventory and will help us become a more walkable, bikable community,” said Community Services Director Bill Maertz. “With this recreational trail, Santee continues to embrace the San Diego River as a defining feature that enhances our city’s beauty and our quality of life.”

The project, which has taken six years from conception to the call for bids, is expected to be completed in early 2015. The trail will consist of a 14-foot-wide decomposed granite surface suitable for pedestrians, equestrians and bicycles bordered by lodge pole fencing. Amenities will include interpretive signs, information kiosks, a shade shelter, picnic tables, benches, drinking fountain, mister, bike repair station.

When completed, the trail will for the first time provide permanent public access to a 107-acre open space property formerly used for farming and industrial sand mining. The property stretches from Magnolia Avenue to the city’s eastern boundary near the Lakeside Baseball Park.

The Walker Preserve trail segment is situated in the middle of a 31-mile-long “high-priority” trail section designated by the San Diego River Conservancy from the El Capitan Reservoir to the Pacific Ocean. When finished, Santee will have completed 3.5 miles of trail on the north side of the river, or about 80 percent of the river’s distance across the city. Santee is working with various partners to eventually connect its riverfront trail to Mission Trails Regional Park.

Development of the Walker Preserve Trail segment carries out the vision of Santee’s 1981 San Diego River Conceptual Master Plan. The conceptual plan was later updated as the Santee River Park Plan, and in 1984 was adopted along with the city’s General Plan.

The Walker Preserve trail is a crucial segment of a 52-mile-long a river park and trail system that will someday extend from the Cuyamaca Mountains to the Pacific Ocean.

The riverfront parcel was purchased for its appraised market value of $2,140,000 with grants from the State Coastal Conservancy, U.S. Fish and Wildlife Service, and the State Wildlife Conservation Board.

The property was targeted for conservation by the federal Fish and Wildlife Service because it contains high-quality habitat that supports at least three federally-protected bird species: the Southwestern willow flycatcher, the California gnatcatcher, and the least Bell’s vireo.

The property was part of a 350-acre dairy farm the Walker family established on the south side of the river when the family arrived in Santee in 1926. The family played a prominent role in Santee’s early history, and the dairy remained in operation until 1971.

Santee is expected to spend approximately $2 million of local park funds for construction of the trail. To help offset that cost, the city obtained a $247,800 grant from the state-federal Recreation Trails Program.

• $1,445,000 grant from State Coastal Conservancy of Proposition 84 funds; $245,000 of that was earmarked for design, environmental review and permitting for the trail;

I am really looking forward to walking along that section of the San Diego River! Thanks to all involved! :)