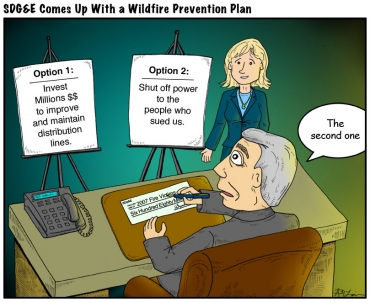 July 31, 2009 (San Diego) – Hosts of two radio programs and a TV show today interviewed East County Magazine editor Miriam Raftery on some of the hottest topics in town-- including a fiery East County issue: SDG&E’s proposal to shut-off power during fire-prone weather. Audio, video and transcripts from KPBS and KCBQ are available below.

(cartoon reprinted with permission from of Voice of San Diego)

Raftery led a sizzling discussion on the controversial shut-off plan for Editor’s Roundtable on KPBS this morning. She was also a guest on KPBS TV's San Diego Week show. Other topics on KPBS included an upturn in the housing market and "trash talk" about garbage collection fees in San Diego. ECM’s editor was a also a guest for nearly an hour on KCBQ radio's Rick Amato show last night, guest-hosted by Gayle Falkenthal.

Hot topics on KCBQ ranged from wildfire issues to the state budget. in addition, listeners heard previews of some exciting coming attractions to be hosted by East County Magazine.

Listen to audio and read a transcript of KPBS Editors’ Roundtable:
Radio: http://www.kpbs.org/news/2009/jul/31/sdges-controversial-power-shut-plan /

At least 2 members of the Council want the City to vote in favor of the shut-off, according to my sources. No word yet on positions of the other councilmembers.

The infamous quote of the idiot mayor of San Francisco during the Prop 8 campaign fits this power shutoff plan best:

It's going to happen "whether you like it or not"!

So, you better be prepared for no power to your homes and businesses soon. When the Santa Ana winds start in a few weeks, the unprepared people will be left out in the cold and dark and probably pretend they didn't know anything about it like most typical back country whiners.

SDG&E claims the conditions could last up to 72 hours but I beg to differ. Last year we had one Santa Ana period with 10 days of continous conditions that met all 5 levels of the shutdown requirements. Can you survive for 10 days without power from SDG&E?