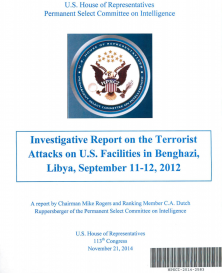 The investigation did find that security was overwhelmed by the attackers at the State Department facility where two diplomats were killed.

The Committee’s investigation found that contradictory intelligence reports led to the CIA’s initial incorrect assessment that the attacks arose out of a protest in Benghazi. The CIA corrected its initial assessment after closed caption television footage became available a week after the September 11, 2012 attacks—two days after  then-Ambassador Susan Rice spoke publicly on the matter, and after FBI interviews with officials on the ground in Libya were published September 22.  Mistakes in talking points provided to Rice were due to conflicting intelligence  from multiple agencies, based on information available at the time—not due to any errors made by Rice or the Obama administration.

The report confirms many findings of six prior investigation by Congressional committees and a panel appointed by the State Department.

Associated Press and others have reported that the Intelligence committee’s report firmly “debunks” numerous alse claims by Republican leaders who had sought to discredit the Obama administration and then-Secretary of State Hilary Clinton (a likely presidential candidate) over their handling of the attacks. Democrats have long contended that the repeated Republican-led probes were politically motiviated, yet now the Republican-controlled Intelligence Committee has failed to find merit to the allegations raised.

As for accountability over the attacks, a Libyan militant extremist, Ahmed Abu Khatalia,  was captured in Libya and extradited to the U.S., where he will stand trial on murder charges in the Benghazi killings.

The House Intelligence committee report, made after two years of intensive investigation, states in the conclusion that it is meant to serve as “the definitive House statement on the intelligence community’s activities before, during, and after” the Benghazi attacks.

Many Republicans are just as eager as Dems to cover their butts. http://pjmedia.com/tatler/2014/11/22/benghazi-annex-security-team-members-disagree-forcefully-with-house-intel-committee-report/
Ambassador Chris Stevens in a previous assignment had worked with Islamist terrorists to overthrow Gaddafi. In September 2012 the new US-allied Libya leaders were just getting established in Tripoli. It was an important time, just after the illegal US regime change with Hillary's "We came, we saw, he died" comment about the death of a US ally. Nevertheless, Stevens traveled to Europe, first to Stuttgart, the home of the Pentagon's Africa Command, and then two days in Vienna, a city containing many UN and intelligence agencies. Upon Stevens' return to Libya at this important time, did Stevens take a role in getting the new government established with all the necessary US support? No, instead Stevens traveled to far-off Benghazi, with its CIA cell of 28 people, "to be present at a September 11 ceremony establishing a new American Corner at a local Benghazi school" according to the House Intelligence Report. Does anyone seriously believe that BS? And so on. It's a coverup, with other aspects I won't go into, like arms shipments from Benghazi to Syria via Turkey. What they should be investigating is the folly of the US exceeding the UN resolution regarding Libya and going for a regime change that destabilized the whole of North Africa, including Libya which is now a failed state. Gaddafi was keeping a lid on these militants which Stevens used to unseat and kill him (Gaddafi), people that then turned on Stevens himself. House Intelligence Committee, hah. They are a joke, as Senator Graham has said today using colorful language.