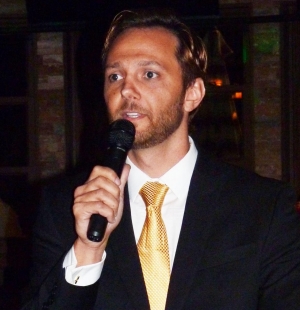 As President of The Chaldean American Chamber of Commerce, I have been in the past year sort of forced to become an expert in the region and this drawn out conflict. My conclusion is that the region that ISIS wants to control by the strategic military advancements it has made is strictly due to the need to seize control over the five border points. Clearly ISIS understands the most important part of this mission and that is oil, water and grains which is in abundance in those areas.

Almost immediately after hearing this horrific news, I became convinced that we should expect more shocking gruesome murder videos due to the marketing gain that this has on ISIS recruitment. This is extremely concerning to me as these Assyrians are not being protected by anyone. This was echoed by Fred Fleitz former senior CIA analyst who said, “This is ISIS’s latest way to grab headlines and grab news cycle by staging acts of atrocity and recruit followers”.

As odious as ISIS is, the Assyrian, Chaldean & Syriac communities must use this moment in history to breakdown barriers put up by our own religious factions and so called leaders. Enough is enough, the time when we can look to one another and embrace oneness and unity is now, not tomorrow or the week after. I am putting out this call of distress to every Chaldean, Assyrian and Syriac through out the world. It was almost exactly one-hundred years ago when another genocide against the indigenous Christains of that land took place which resulted in the slaughter of hundreds of thousands of Assyrians and other Christians. Sir Winston Churchill said, “Those who fail to learn from history are doomed to repeat it.”

My dear humanitarian friends, I felt compelled to write to you today as urgent as the need to breath or drink water. Seize the moment, the world is watching. I am fully convinced that the reason I am writing this humble release whereby I am calling for unity between Assyrians, Chaldeans & Syriacs is solely the by product Church Division which has trickled down through generations. I shouldn’t need to call for unity, it should have already existed. I shouldn’t need to coach anyone on the importance of our common history, it need not be said. It is merely fact, chiefly in this precious moment of literal life and death. I urge you not to look for leadership in these matters by means of clergy but by pragmatic reasoning and genuine care of human kind.

I am here because of imigrant parents from Europe and believe everyone whould have opportunity to thrive and make a better life for their families. Mine did through learning the language, adopting the culture, and working hard. That being said Ben, by the very existance of the San Diego East County Chaldean American Chamber of Commerce, you are creating seperatism with Chaldean people and long time residents of East County. The existing Chamber of Commerce was not good enough for the Chaldean's like it is for every other race, religion or ethnic group. That is what us long time residents have come to see from this Chaldean community. They come in and want to make our long time home their's. However, they do not want to embrase it. They want to change it to something that they had in the country they left. That is not how you make good neighbors. The culture seems to be one of pushiness, rudeness, and not speaking the native language even when they can. I do a lot of business in East County and can tell you that the Chaldean people are the absolute worst to deal with because they always want something different for their people, very demanding, and very rude. Mark Lewis is a lot of things that are not right, but talk to anyone that worls at a school and they will tell you he was right about the freebees when they dont need them. I hope as the founder of this organization, you would have the foresight to work with their seperatist community and work on how to be good neighbors and decent people first and then and only then will they be embrassed. The path you and the Chaldean community are on will never be successful because it is one of craming their culture down our throats and that is a huge under-estimation of the East County community and what they will put up with. They say they are Christians... I pray that they show they are through their actions.
Thank you Ben for this article. My mom was a Kalasho and I have a lot of family in San Diego, I hope to meet you one day. God bless
I grew up in a home in which my parents were born in Telkepe, and we called ourselves Chaldean...but in reality, study of history shows up the contemporary use of the name "Chaldean" was bestowed upon those Assyrian converts to the Catholic church, from the Assyrian Church of the East, a name given by Rome at the time of conversion. Most Chaldeans have been Catholic for only the past 200 years or so. The contemporary Chaldeans of today, are not those of the antiquity, as proven by multiple historians. The term Chaldean denotes Assyrians of whom follow the Catholic faith, NOT AN ETHNICITY. We are ethnic Assyrians, but Religiously Catholic. I love my Catholic Faith, but I do not deny the origins of my ETHNICITY, which is ASSYRIAN. The Syriac church is another splinter group of the Assyrian Church of the East, as the study of history shows us. Please do your research people. Be proud of your heritage, and the great history behind it, although it has been suppressed by various conquering people over time. United we may survive, but divided we fall, even if you don't agree with the history books....we stand united in our love of Christ and Faith in Christianity. Peace be upon you all, for those around the world in the diaspora, and our brothers and sisters in Iraq and Syria facing death and persecution. DO NOT CONFUSE CHALDEANS OF THE PAST WITH CHALDEANS OF TODAY.... Listen to the leader of the chaldean church Bishop Sarhad Jammo, PLEASE click below. https://m.youtube.com/watch?v=BGKkG3xrSP8 Educate yourself people on your beautiful and rich history. God bless you all. I love you all, my brothers and sisters. We are 1 family, 1 blood. Please set petty differences apart. Dr Sam

I agree with the poster. The slaughter of the innocents in the Middle East must be opposed by all thinking people! I join the poster's call for unity among the named ethnic groups!

Dear Paul, The Chaldeans whom are living in the heartland of Ashur, Nineveh have not emigrated there. There are many historical and archaeological evidences of their existence in those villages for over 3500 years. I am startled by a man in your level of education, especially in history to make a claim like that. Then you have used the bible as a historical resource to support your argument? The bible has been rejected by almost all the academic scholars as being reliable source of historical information.
While I would have to take issue with the notion that the Church and clergy have divided the people, I would argue that it is man's sinfulness and pettiness that truly divides. Chaldeans and Assyrians are two great peoples mentioned in the earliest parts of the Bible and have an intertwined history and language with Assyria dominating the north and the Chaldeans controlling the south. Most historians agree that the Bible as historical document has been validated as the best ancient historical text in the world. We know that Abraham was of Chaldean stock and so we Chaldeans can trace our roots to the Savior of mankind via the Abrahamic bloodline. The Assyrian people are descended from the mighty hunter Nimrod who built Nineveh. Some have asked, "What are the Chaldeans doing in the heart of historic Assyria?" The answer is simple, it's called migration due to persecution which we can also see happening in our modern times. The muslim hoards swept through the plains of southern Mesopotamia and so the Chaldeans were faced with the same evil dilemma that many middle east Christians face today, convert or die. So many Chaldean Christians migrated to the safe haven of the mountain strongholds of the north and developed their own communities with the welcome blessings of our Assyrian Christian brothers. Our common faith in Jesus is truly the one thing that unites us and so I would urge all Chaldeans, Assyrians and Syriacs to unite and work together under the banner of Christ for only He can save us. If we are true believers we will not get caught up in sectarian divisions but focus on the cornerstone that is the Church. I believe that our clergy have the best interests of the Church in mind and are doing the Lord's work and we would do well try to do the same. 1 Corinthians 3:3 "When there is jealousy among you and you quarrel with one another, doesn't this prove that you belong to this world, living by its standards? 4 When one of you says, “I follow Paul,” and another, “I follow Apollos”—aren't you acting like worldly people? 5 After all, who is Apollos? And who is Paul? We are simply God's servants, by whom you were led to believe. Each one of us does the work which the Lord gave him to do: 6 I planted the seed, Apollos watered the plant, but it was God who made the plant grow. 7 The one who plants and the one who waters really do not matter. It is God who matters, because he makes the plant grow." <><