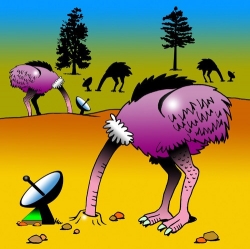 March 14, 2015 (San Diego) – Two news stories this week reveal just how desperate some climate change deniers are to censor the public from hearing scientific facts—and how far credible scientists are now willing to go to save the planet and debunk phony “experts.”

The first story sounds like Orwellian double-speak. The Governor of Florida has prohibited state employees from using the terms “climate change,” “global warming” and “sustainability.”

Never mind that the low-lying peninsular state is vulnerable to extreme coastal flooding from rising sea levels due to polar ice melting, as the Florida Oceans and Coastal Council reported before the gag order . Or that increasingly severe storms tied to climate change, according to scientists, are also forecast to wreak havoc on Floridians. Or that the National Resources Defense Council predicts that the projected heat rise from global warming in Florida will be the most dramatic in the nation. Florida’s leaders, and potentially other states led by climate deniers, believe the public shouldn’t hear about any of those perils.

But now a new documentary film,“Merchants of Doubt,” is hitting theaters across the U.S. to reach the public directly. The movie is based on a book by Harvard professor and science historian Naomi Oreskes – and it plainly debunks the pseudo-experts and phony tactics being used by climate change deniers.

The film is backed by eBay founder Pierre Omidvar and directed by Robert Kenner, known for his expose film “Food Inc.”

The film points out parallels in the tactics used by the tobacco industry, which long denied the harmful health impacts of its products, and other industries that sought to distort truth for profit.  Guess what? Some of the very same scientists who once supported the tobacco industry’s positions are now out shilling for the anti-climate change interests.

The documentary also reveals financial ties of these phony “experts” to the oil industry and other businesses that profit off fossil fuels—and thus have a vested interest in lying to cover up truths that could harm their bottom line.

Despite 95% consensus in the scientific community (and virtually 100% among scientists not paid by the oil industry and its think tanks) , the Republican Party has adamantly opposed actions to reverse climate change and further, moderate Republicans who dared to speak out and say they believe that climate change is real and man-made were confronted with challengers in primary races and unseated.

Climate change deniers, unable to use logic since the evidence overwhelmingly proves the rapid escalation of climate change, often resort to arguing that policies to reduce greenhouse gas emissions are against free market values.  If you regulate tobacco or restrict use of carbon-faced fuels,  the argument goes, you’re on a slippery slope toward tyranny and elimination of personal choice.

Never mind that it was conservative George W. Bush who first proposed carbon emissions trading, or that Democrats initially opposed the idea.  But when it was tried and worked, the two parties switched positions.

Now, with credible experts on climate change warning that it may soon be irreversible if action is not taken, potentially turning our planet into a place not fit for human habitation, the consequences of ignoring the facts could not be more dire.

Oreskes blames the media for giving equal time in some cases to discredited experts, lending credibility to debunked claims. “Sometimes the evidence and the data are all on one side,” Oreskes observes.

A petition has been launched asking the media to stop giving air time to climate change deniers.

Critics of the film and the petition that this would be censorship.

Media typically refuses to give air time to others making ludicrous claims, such as Holocaust deniers or people who claim the moon landings were staged on a Hollywood back lot.

The film’s director concludes that “People who mislead the public on climate change should not be on TV. Period.”

I love the drawing of me at the top of the article.
man made climate change is not a fact it is a theory and a fraudulent one at that. this attempt is no different than the catholic church silencing those who Galileo and others .... only the most evil and despotic abusers of humanity would think shutting debate is an answer to anything. hitler, stalin, mao and isis would be proud using the term denier is also the mark of a person lower than a child molester
My degree happens to be in this field and I studied under a well known climate scientist. Climate change is fact, not theory. The evidence is overwhelming. I am not paid by anyone to say this. The scientists who conclude this are independent and not benefitting financially. Those who are deniers are on the payroll of the fossil fuel industry. To compare me to a "child molester" for telling the truth about SCIENCE is repulsive. My readers can count on truth from us, never propaganda. The arguments of the deniers are easily debunked if you do the research yourself, as I advise you to do. I will also remind you that personal insults and name calling violate our rules for posting. Do it again and your account will be cancelled. You can state your opinion, however ill informed that may be, but you cannot denigrate the morals or intelligence of those with whom you disagree.