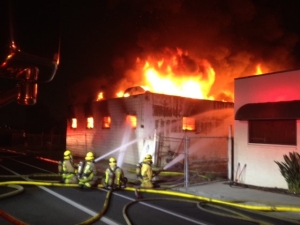 Firefighters responded to a report of the fire found heavy smoke and flames coming from the roof and a second alarm was issued.  Heartland Firefighters from El Cajon and La Mesa, with assistance from CAL FIRE and the San Diego Fire Departments, had the fire out in about one hour and 20 minutes.

There are no injuries reported and no damage estimates at this time. The cause of the fire is now under investigation.