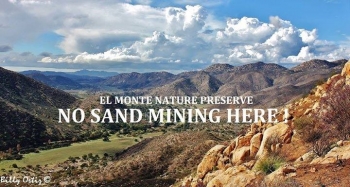 UPDATE: Hear our interview on KNSJ radio with Lisa Wood, Lakeside resident and chair of Supervisor Dianne Jacob's youth activites on the river committee.  Wood discusses impacts of the sand mining project, which she believes would be severe, irreversible, and worse than Sunrise Powerlink.

May 29, 2015 (Lakeside) – A controversial proposal for sand mining in scenic El Monte Valley along the San Diego River bed is on the agenda for the Lakeside Planning Group on Wednesday, June 3 at 6:30 p.m. in the Lakeside Community Center (, 9841 Vine St, Lakeside). The applicant is the “El Monte Nature Preserve LLC,” though residents voice concerns the project will be destructive to nature, not preserve it.  View application.

Lakeside resident Billy Ortiz, a videographer who chronicles Lakeside’s beauty for media outlets and the Lakeside Historical Society, opposes the project. He voiced outrage over the plan.

. “If we don’t stop them, our beautiful valley will be destroyed,” Ortiz told ECM.  “We will be there to protest and discourage the project.”

A Facebook page dedicated to halting the project has been set up. According to the site, the project  is “masquerading” as a nature project but would lower the valley’s level 30 feet and take 30 years.

The El Monte Valley is home to a wide range of threatened and endangered species including golden eagles, horned lizards,  Least Bell's vireos  and gnat catchers,  as well as other wildlife such as deer, bobcat, loggerhead shrike, red headed woodpeckers, and nuthatches.

Residents also voice fears over  pollution of their drinking water supply in an area dependent on wells.  Concerns have also been raised over potential spread of Valley Fever, which has been found in the valley, as well as impacts on the Van Ommering Dairy.

Sand mining has been proposed at the site in the past, on land owned by Helix Water District, and has been the subject of past litigation involving the District. Last August, the District settled with h El Monte Canyon LLC and its successor, El Capitan Golf Club LLC, as ECM reported.  The settlement ended a six year dispute over plans by Helix for a water recharge project and wildlife habitat in Lakeside’s El Monte Valley.

The deal allowed for sale of the property and some sand mining at the site, as well as habitat restoration.

How'd the meeting go? Anyone know?

This is all about a lot of sand worth millions and millions of dollars vs. a small community of people. This community really needs to do the homework and oppose this corporate powerplay or suffer the consequences for the next 15-30 years. Approximately 150 people attended the meeting, we are going to need more than that to get involved. Rest assured they will not be allowed to RAPE the El Monte Valley without much pushback from our strong community.
Please just leave our peaceful canyon alone.. we won't run thousands of semi trucks and excavation equipment up and down your streets for the next 30 yrs don't do it to us. Not to mention all the dust and possibly Valley Fever you plan on stirring up for all of the locals to deal with.. would you want this project in your backyard? Neither do we.. A bit of compassion please...

Valley Fever concerns are justified. Leave these areas alone. Nature needs to be respected or else it can rear its angry head and spew out a few thousand fungal spores that can victimize people and pets alike.

El Monte Valley and El Cajon Mountain are East County icons. So is the Van Ommering Dairy Farm. Putting a sand mining operation there will not only destroy the beauty in the valley, but also from above when looking down on it from the surrounding recreational trails made just for that purpose. This is another industrial project being put in an area it doesn't belong.