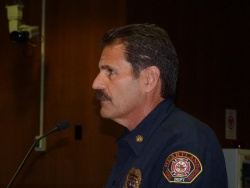 Heartland Fire & Rescue Chief Rick Sitta made the announcement at today’s El Cajon City Council meeting.  “This is an exciting day for us,” he said.

The ISO surveys fire departments on overall fire suppression service, looking at a variety of factors including water availability, equipment, deployment, training, personnel and risk reduction. Districts are ranked 1 through 10, with a class 1 rating presented only to those districts that score 90 or higher out of a possible 100 points.

The rating takes effect September 1st.   According to Ruscansky, homeowners in  the Heartland Fire District should see their fire insurance rates drop by 5% on their homeowners’ policies.  For commercial business property owners, rates should drop 5 to 15%, depending on several other factors.

The rating validates  the recent decision by the cities of La Mesa, El Cajon and Lemon Grove to consolidate their firefighting services under the Heartland Fire & Rescue District.

El Cajon Mayor Bill Wells praised Heartland Fire for its success . The Mayor told Chief Sitta, “Please tell all the men and women you work with how proud we all are of you.”

Great news for Heartland Fire. Link to reduced insurance rate may be exaggerated. To receive reduction in insurance premiums your insurance would have to pay for and use ISO rating vs zip cide based loss historyand of course comply with all California and Federal regulations. http://www.eastcountymagazine.org/fire-insurance-rates-homeowners-business-drop-heartland-fire-district%E2%80%94thanks-district-attaining