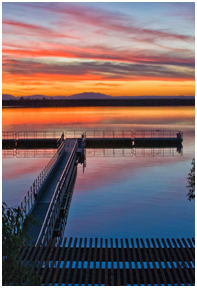 June 15, 2015 (San Diego’s East County) – Helix Water District’s Board of Directors will vote on whether or not to close the campground at Lake Jennings in Lakeside. The vote is set for Wednesday, June 17th at 2 p.m. at the board meeting at the district’s headquarters, 7811 University Avenue in La Mesa.

The vote is slated despite huge gains made in stemming financial losses, from $200,000 in 2013  to just $24,000 this year, plus increased profitability of other attractions and activities with potential for more, including state approval to add kayaks just  last month.

Director Kathleen Coates-Hedberg urges the public: “If  you want to see Lake Jennings Campground stay OPEN for the future and would like to voice your opinion, please come to the Board meeting or send an email to our Board Secretary and she will forward to Board Members. Board Secretary, Sandy Janzen, Sandy.Janzen@HELIXWATER.org.”

The campground was built as a condition of the  Lake Jennings Dam Grant in the 1960s, which required operation for at least 40 years, expiring in 2008. The County ran the campground until 2008, when it turned over operations to the Helix Water District.

After five years, Helix estimated the campground was costing $200,000 more to run each year than the revenues it brought in. At the urging of director Joel Scalzitti, the board appointed a committee to study ways to make the campground profitable or revenue neutral.

Major improvements have been made, reducing the shortfall to just $24,000 estimated for this year.  Attendance is up at the campground, which has new employees, ideas and outreach.  A new marketing plan with an outside contractor showed “tremendous potential” for the campground to continue increasing attendance with additional marketing, since most people don’t know the campground is there. The marketing plan does NOT recommend closure.

“Lake Jennings Campground is a great service and benefit to the community. The benefits of parks and campgrounds are endless, helps families be healthier, fresh air, socialization, improves moods, less stress & exercise, a great staycation and appreciation for the environment and watershed,” Hedberg says.

Helix’s new senior public affairs representative, Mike Uhrhammer, former communications manager for the Padre Dam Municipal Water District at Santee Lakes said that Helix would be wise to look at new ways for the lake to draw customers to its campground. The lake is one of the area’s top fishing destinations, but Helix could also  promote other activities, including climbing and hiking, biking, photography and trail running—coordinating with County efforts to increase trails and exercise.  Lake Jennings also recently created a new trail map: Flume Trail.