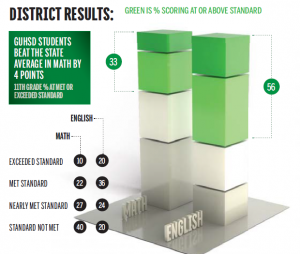 September 11, 2015 (San Diego’s East County)--The new Smarter Balanced (SBAC) State test scores are now out.  The tests are meant as a positive step forward in helping to ensure that students are prepared to enter the 21st century with the critical thinking, problem-solving, and analytical skills required for success in college and careers, providing a benchmark for measuring progress in future years.

Grossmont Union High School District Superintendent Ralf Swenson says of the GUHSD results, “I am pleased that our students scored at or above the State average on tests signiﬁcantly more rigorous than the prior CST assessments. In mathematics — where the content standards have dramatically increased expectations of student skill and knowledge — District students scored four points higher than the State average.”

Swenson says these  results stem from “extensive preparation, including on-going work of our teachers to develop new curriculum and devise new instructional strategies to prepare students for success in the 21st century.”  That includes the district’s “Future Forward” and more to help students work in an increasingly technical environment.

The Future Forward program equips students with skills needed for the 21st Century through the use of four C’s: creativity, communication, collaboration, and critical thinking. Every student uses a digital device to  engage in real-world work done by professionals such as scientists, engineers, musicians, artists, filmmakers, authors, and more.

Preparation for new tests has included investment in more than 10,000 digital devices, additional internet bandwidth, and extensive teacher training, helping Grossmont and other districts to assess the district’s goals and effectiveness.

approximately half the schools in the state are above the state average in math. That's what an average is. The larger question is: What is the effect of this stress on math and English doing to the students who, because of their innate nature, fail to excel in those two (testable) subjects? Like those who favor music, and art, and sports, and organizing people, and....the list goes on. How does the creativity, communication, collaboration, and critical thinking skill program interact with the outmoded dependence on obsolete math and English tests?