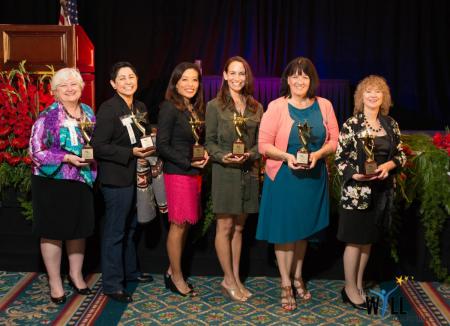 According to Leah McIvor, 2015 event chair, a record 41 nominees were considered by the committee for the awards program, now in its 13th year. She said the recipients were honored for their outstanding leadership, exemplary character and integrity in the community, as well as their efforts to empower women to succeed and prosper in life and business.

McIvor is incoming 2016 board of directors chair of the 600-member San Diego East County Chamber of Commerce.

Fortin, a former lawyer working in Las Vegas, was San Diego’s first franchise owner of a Nothing Bundt Cakes bakery store in 2007. Today, she operates six stores with plans to open a seventh store in Carmel Valley in November. Her company has sponsorship partnerships Rady Children’s Hospital and Susan G. Komen of San Diego. In addition, the company supports a number of non-profits, including Cystic Fibroris Foundation and National Multiple Sclerosis Society.

Guthrie is serving as 2015 president of Pacific Southwest Association of Realtors (PSAR), a 2,000-member trade organization of realtors in the San Diego area. She has guided the organization this year to increases in new membership and retention levels. In addition, she was instrumental in PSAR's Helping Hands 4 Homes projects which brought together more than 100 PSAR members and affiliates for a two-day home improvement project for a disabled and unemployed La Mesa homeowner down his luck. In her management career, she has managed more than dozen real estate offices, including opening eight new offices during the past decade. During her 20-year sales career, she was a top producer for several companies and responsible for more than 500 transactions. She currently manages Coldwell Banker West’s East County office.

Nocon is CEO of Noah Homes, a non-profit providing residential care and advocacy for adults with developmental disabilities. Founded in 1983, Noah Homes cares for 70 men and women with developmental disabilities who live in eight homes situated on 11 acres in Spring Valley. Services and programs include a community garden and orchard, community integration through day programs, work sites and volunteer activities. Nocon also has supported Alzheimer’s research in conjunction with UCSD Down Syndrome Clinic in La Jolla and Alzheimer’s Association of San Diego and Imperial counties.

Pinto is the recently elected chairwoman of the Jamul Indian Village Council after serving as vice chair since 2008. She joined the Council at age 22 in 1994. In addition to overseeing day-to-day Council operations, she serves as director of Acorns to Oaks, a tribal resource program for young people that focuses on culture, health and fitness and technology and is designed to help prevent teen pregnancy and drug and alcohol abuse. 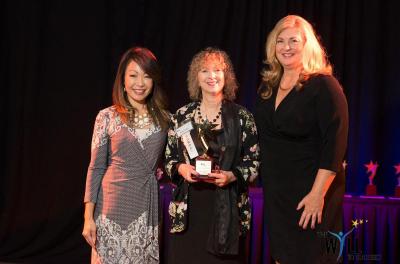 Raftery is founder and editor of East County Magazine, a news website founded in 2008 that covers politics and community events happening in the East County region. She also oversees an emergency alert service that delivers breaking news to subscribers on a variety of topics, including weather warnings, traffic accidents, missing children, crime and wildfires. In her 30 years as a journalist she has won more than 250 writing awards. East County Magazine is published by the Heartland Coalition.

Smith-Chavez, an attorney and founder of her own firm, Smith-Chavez Law, has worked in the legal profession since 1970. After three decades with a prominent San Diego firm, she founded her own private practice in 2013. She has more than 37 years of experience in business and real estate law. She was the lead author of "California Civil Practice, Real Property Litigation," a legal textbook, and is a former chair of the San Diego County Bar Association Real Property Section, where she remains on the Executive Committee. Earlier this year, she was honored by the National Association of Women Business Owners as 2015 Woman Advocate of the Year.

Urushima-Conn is president/CEO of the Asian Business Association (ABA), a San Diego-based chamber of commerce for the Asian community. The ABA has about 500 member business representing more than 60,000 employees. Prior to ABA, she was associate executive director of development for the Center for Community Solutions (CCS), a non-profit agency that focused on sexual assault and domestic violence prevention. Prior to CCS, she spent 10 years at KGTV-TV/10News as community and media marketing manager.

Zimmerman was promoted to chief of the San Diego Police Department in March 2014. She joined the SDPD in 1982. Assignments during his law enforcement career have included vice, narcotics, internal affairs, community relations, mayor's executive protection detail and field lieutenant. Zimmerman did not attend the awards ceremony.

In a way, it's too bad that it's necessary to highlight women's leadership accomplishments at a time when many large corporations have female CEOs and women excel in governerships and politics, etc. Various studies show that women make better managers, especially when transformation is involved along with requirements for cooperation rather than competition within the workplace, along with communications and human relations. All that said, this is a great thing and all are to be congratulated. --But watch out, other women are coming along. (Men too.)

So glad your valuable efforts on behalf of us East County residents are being recognized.