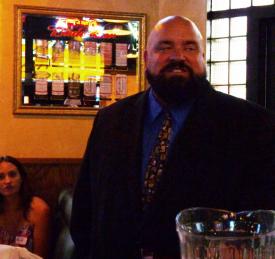 Mayor Mark Arapostathis spoke on Oktoberfest,  which this year was scaled back to two days with fewer vendors but more emphasis on the festival’s German roots.  This Oktoberfest was run by the La Mesa Village Merchants Association, without the Chamber of Commerce. The Mayor addressed how Oktoberfest has changed through the years, reminiscing about past festivals and how the changes have impacted the community and local merchants.

A representantative from the merchants' group also have a preview of upcoming events including Christmas in the Village, a grand reopening of the downtown streets and the centennial legacy project unveiling.

“Some merchants said they did better in their shops,” the Mayor noted, adding that he’s had feedback from several people who said they don’t want to see Oktoberfest continue.

Last year there were problems with crowds of youths congregating, leading to a beefed up police presence including some in body armor this year.  On Saturday night, many youths came into the festival area who were “not here to eat bratwurst and drink beer,” the Mayor said, but added that the earlier closing time of 10 p.m. enabled police to break up the group due to curfew. 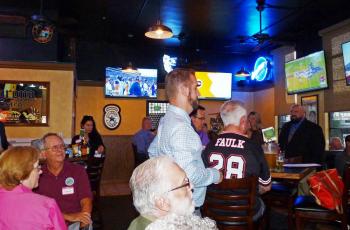 He reminisced about the early days of Oktoberfest when there were more craft booths. “That’s why everyone came to Oktoberfest,” he said, but added that the city has no control over the types of vendors chosen by the merchants’ group for the event.

The Mayor supports having events in the year and envisions someday having streets closed off for a farmer’s market downtown.

He recalled another long-gone tradition that brought back fond memories. “Kiwanis, for $5, handed a 10-year-old a sledgehammer and I got to break up a car. Times have changed!” Mayor Arapostathis recalled.

The downtown streetscape is nearing completion and the city had workers out at 5 a.m. the first day of Oktoberfest to put up railings for restaurants to restore sidewalk dining areas just in time.

All construction is slated to be completed in December, when a major celebration is planned.

Laurie MacDonald from the La Mesa Village Merchants Association said the merchants are working with the City on plans to combine a grand reopening of the downtown streets with Christmas in the Village, which she says will “look a little different” this year with a focus on an ”open house” atmosphere showcasing “quaint La Mesa.”  There will still be music and carolers, with merchants opening their retail doors to welcome families.

She would love to see the old La Mesa drugstore turned into an old fashioned soda fountain eventually.

She also hopes media will help bring in crowds for the celebrations coming up, including dedication of the Lookout centennial monument, for which Jerry Lester donated $40,000.

Bonnie Baranoff with La Mesa Conversations told East County Magazine that she found the mixer to be “encouraging and empowering” adding, “I’m happy to be part of a group of like-minded individuals who are civic-minded and wanting to bring our community together. Our mission is to bring La Mesans together to talk about topics of interest to us as a community – our current issues and our future.”

La Mesa Conversations hosts a mixer one month, sometimes with a speaker, and a panel discussion in alternating months.  “We’re very happy the Mayor, Dr. A, came tonight and spoke. That’s what community is about – being able to talk to elected officials.  He always seems quiet and stoic but he was quite chatty tonight, and that was good.”  The Mayor also fielded questions from citizens on issues related to Oktoberfest.

The next two La Mesa Conversations events will be:

Co-hosted with Friends of the La Mesa Library at the Masonic Lodge, 4731 Date Ave.

I agree with 25yr LaMesan. I love going to Oktoberfest, but in my opinion, the La Mesa one has always fallen short. This year I couldn't even find the beer garden or beer vendors. I found one booth that was selling German-style food, but one Brautwurst was $12! That price is far over what it should cost. I didn't hear any live music or really see much of anything that the celebration should entail. A few years ago I also attended, and the "beer garden" was this horrible, tiny, tarped off location with seats and tables that were jammed in there, and it was almost totally closed off to view of the street and event. The light was incredibly bright to the point that it was uncomfortable. I like the vendors overall, but I would have called it more of a regular street fair than Oktoberfest. Lastly, the El Cajon Oktoberfest is put on by the German American society, and it is very authentic. La Mesa really needs to make the Oktoberfest celebration much more authentic and relevant; otherwise, just call it a street fair.
This is my first time to this site, but I wanted to comment on the Oktoberfest. To me, my family and friends, this was a very unsuccessful event. It was very small and didn't include the vendors and food which are a normal part of this celebration. We have lots of friends who love to come to this event, but they were hugely disappointed and I doubt will return. It's really a shame. Certainly congregating people can be dealt with while keeping the event as it used to be. We wonder if the Christmas event will suffer the same changes.