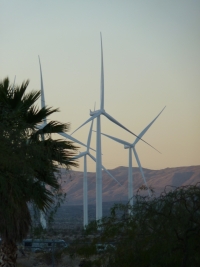 March 2, 2016 (Ocotillo) – The numbers are in –and for the third straight year, the Ocotillo Wind Energy Facility has fallen far short of the 34% capacity factor that Pattern Energy predicted the project would generate in its applications for lucrative federal subsidies.   In 2015, the Ocotillo project generated just 23.06%.  In 2014, it hit 26.4% and in 2013, when it was offline two months for hurling off a multi-ton blade, it produced a scant 15.7%.

We’re not surprised, since our award-winning 2014 investigative article, Was It Fraud? included forecasts by an international wind expert,Nicolas Boccard, who accurately predicted the project’s failure before it was built. He suggested the federal government had grounds for a False Claims Act suit against Pattern Energy.  We again raised questions about the project’s viability last year, in  a second story. 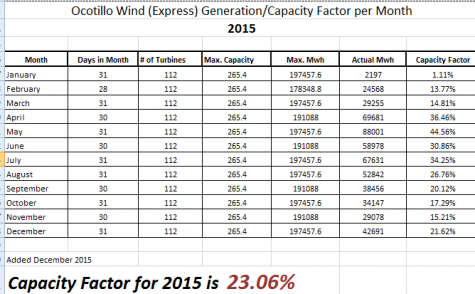 In its third year of dismal performance, the Ocotillo wind project reached that 34% capacity forecast in just two months, April, May and July, according to data from the Federal Energy Regulatory Commission.   Last year it hit capacity in just three months and in 2013, just one month.

We brought our findings, which included Boccard’s damning conclusion and independent analysis of two other experts, to the attention of three members of Congress.  That included evidence that appeared Pattern had falsified maps to make it appear that Ocotillo had a substantially higher elevation than it did. The project in fact is in an area that the federal government’s own maps indicate has wind speeds below levels considered viable for a wind project.

Congressman Juan Vargas and then-Congressman Bob Filner  back in early 2014.  Filner at one point raised doubts in a letter sent to the Secretary of the Treasurer Timothy Geitner suggesting that funding be halted before construction was completed noting that the project posed potential to be a scandal “worse than Solyndra,” according to his hand-written note in the margin.  Congressman Issa’s offices was contacted but failed to respond to multiple inquiries. Vargas’ staff told ECM he reached out to the Department of Energy, but nothing has been done to take action on the fraud allegations.  Pattern, asked for comment in 2014 and 2015, never responded.

The project is far from benign. It bulldozed some 12,000 acres of desert on public Bureau of Land Management Land that shares a five-mile border from Anza-Borrego Desert State Park. Tribes objected to destruction of sacred sites.  Residents of Ocotillo, surrounded on three sides by the turbines, claim to have suffered health problems related to dust, sleep disruption, noise and flashing red lights, exposure to toxic chemicals dumped into on the desert that later flooded their town, loss of property values, destruction of pristine desert views and a peaceful lifestyle, as ECM documented in numerous stories before the project built (find links to many past stories here.)

Ocotillo resident Mark Meech stated in an e-mail to ECM today, "I just can't believe our government allows such waste and fraud happen with our money."

Ocotillo Wind was one of the first projects pushed forward under new fast-tracking projects for massive “green” energy projects.  Residents including an engineer raised serious doubts about the project’s viability as well as its predicted negative impacts, but their concerns fell on deaf ears as the federal government, aided by local and state officials who failed to properly investigative concerns, pushed through the project without appropriate scrutiny of its negative impacts nor even its ability to produce the wind power promised.  To residents of Ocotillo, surrounded by over100 wind turbines whirling in their community, each taller than a 50-story building at 500 feet high, the only thing “green” about the Ocotillo Wind Energy Facility is the money pocketed by the developer.

And while we're punishing the guilty, let's not forget the legislators who created these crazy mandates and subsidies in the first place.

It WAS Fraud! The data continues to substantiate the truth that this project is an abject failure on many levels. Pattern Energy was telling us lies, over and over and over again. They are despicable and need to be punished accordingly. Those wind turbines aren't worth keeping up anymore and need to be taken down so the residents of Ocotillo can enjoy their lives again. Maybe the rest of us will return to enjoy the area again, too.