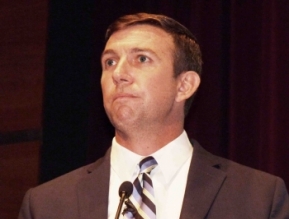 May 1, 2016 (San Diego) – Citizens for Responsibility and Ethics in Washington  (CREW) has requested that the Federal Elections Commission (FEC) conduct an audit of the campaign committee for Rep. Duncan D. Hunter (R-Alpine). CREW  has also asked the Office of Congressional Ethics to investigate whether Hunter violated House ethics rules through thousands of dollars in questionable expenditures charged to his campaign including a Hunter family trip to Italy, charges to department stores such as Nordstrom’s, an Italian jeweler, and a company that provides uniforms for a school attended by Hunter’s children. View CREW complaint.

CREW found that over Thanksgiving weekend in 2015, Hunter and his family spent campaign funds on plane and train tickets, hotels and meals for a trip to Italy, including stops in Rome, Florence, Naples, and the resort town of Positano on the Amalfi coast.  Particularly suspect, according to CREW, was an expenses listed as food/beverages that in fact was made to an Italian jewelry store that has confirmed to the San Diego Union-Tribune that it does not sell food or beverages.

“This spending, the timing of the trip over the Thanksgiving holiday, and photographs Rep. Hunter posted on his Facebook page suggest the trip was a family vacation,” CREW concluded.”None of these expenditures, however, has been identified as personal or mistaken.”

Other questionable expenses exposed by CREW include charges in 2015 to stores including Nordstrom’s, Macy’s, Barnes & Noble, and Educational Outfitters, a school uniform company.  The campaign claimed these purchases were for contributions to local charitable organizations. CREW also raised questions over  hefty cable and Internet service bills at Hunter’s home which doubles as campaign headquarters and payments to Hunter’s wife, Margaret, who is his campaign manager.

The new revelations come on the heels of recent  reports that Hunter’s campaign inappropriately used campaign funds to purchase video games, tuition at his children’s school, a garage door, oral surgery and surf/skate shop items.  Hunter, after media published those expenditures, paid back some $12,000 to the campaign.

Hunter and/or his campaign have offered a string of explanations for those prior expenditures citing “mistakes” in bookkeeping,  his teen son using the wrong credit card in Hunter’s wallet, overcharges on the credit card, and in the case of the oral surgery, the Congressman has denied that any member of his family had oral surgery done.  The campaign has reportedly hired an outside law firm to audit spending and amended its disclosure reports for those previously reported items.

ECM sent an email asking Hunter spokesman Joe Kasper for a response to the CREW complaint and the new expenditures questioned by the group.  Thus far we have not received a reply, however  Kasper sent an e-mail to Patch.com stating, “"CREW is a leftist organization that is targeting Trump supporters."  Hunter was among the first members of Congress to endorse Trump.

But CREW has a long record of targeting both Democrats and Republicans embroiled in ethical issues.

CREW’s list of most corrupt members of Congress includes 5 Democrats and 11 Republicans.  CREW’s list of Congressional members currently under investigation for ethics issues includes 6 Democrats and 4 Republicans.   Its report on nepotism in Congress turned up 248 members whose family members benefitted personally from their positions includes many in both parties. While CREW recently raised issued about Trump, in the 2008 election CREW was calling on Hillary Clinton to release her tax returns for the public to see.  CREW’s website lists the organization as a nonpartisan, nonprofit group.

But Kasper told the Union-Tribune, “We don’t owe CREW an explanation of what he might have done to involve official activities around any outside event or travel, regardless of whether his family was with him.”   He has previously said that campaign funds can be used for international travel expenses under some circumstances, as well as buying donation or donor support items “as was the case here.”

Federal regulations make clear that campaign funds may not be used for travel costs of trips that are primarily for personal or recreational purposes, though meal expenditures are allowable if some campaign activity occurs on the trip.

Hunter’s wife, Margaret, has received $116,000 for work as a campaign consultant in addition to $14,000 in reimbursements from the campaign over the past six years. That money includes her $3,000 a month salary as campaign manager.  The Hunter campaign committee did admit to $2,000 in overpayment to Mrs. Hunter, which it has indicated would be refunded, but has stood by the remaining expenditures as  legitimate campaign costs.

Seems 'Dunkin' has learned the game of politics well by including his spousal unit on the campaign payroll. It's a good to fatten your bottom line, isn't it Dunkin? How could anyone question the inclusion of your wife on the payroll? Standard procedure isn't it? Do you also have a pet you could include?