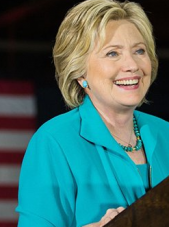 These six states choose a total of 806 delegates on June 7, making it the second-biggest day in the Democratic primary calendar (after “Super Tuesday,” March 1, when 865 delegates were at stake).

“News outlets generally withhold the results of exit polling until voters have finished voting, regardless of how far ahead the leading candidate is, because they don’t want to confuse poll-based speculation with the actual electoral results. AP, it seems, has no such qualms,” FAIR observes.

“It is unfortunate that the media, in a rush to judgement, are ignoring the Democratic National Committee’s clear statement that it is wrong to count the votes of superdelegates before they actually vote at the convention this summer.

“Secretary Clinton does not have and will not have the requisite number of pledged delegates to secure the nomination. She will be dependent on superdelegates who do not vote until July 25 and who can change their minds between now and then. They include more than 400 superdelegates who endorsed Secretary Clinton 10 months before the first caucuses and primaries and long before any other candidate was in the race.

“Our job from now until the convention is to convince those superdelegates that Bernie is by far the strongest candidate against Donald Trump.”

June13 According to a Capitol Weekly early-voter exit poll, Hillary Clinton was leading Bernie Sanders by less than 10% in the Los Angeles area vote-by-mail balloting ahead of last Tuesday. According to results posted to the Los Angeles County website, Clinton was winning vote-by-mail ballots by 66.6-33.4%, for a discrepancy of more than 23%. The discrepancy cannot be easily explained by demographic factors: the results of the Capitol Weekly exit poll were weighted by age and race. Moreover, the exit poll had 21,000 respondents, and was praised--prior to election night--by mainstream elections journalists, including Nate Cohn of the New York Times. While no exit poll can prove fraud, a significant exit polling discrepancy such as this constitutes cause for alarm, especially one of this magnitude. It's also sufficient cause for immediate action: voters should bring pressure to bear on officials and demand an expanded hand audit.
Who was Pres in 1996 when Telecommunications Act was signed!
...why?
as when the Washington Post called the Clinton-Sanders debates for Clinton early in the campaign, although Sanders clearly won the debates according to polls. In the US, six corporations control ninety percent of the media. There's no way to beat the establishment when it comes to mainstream media, which is why we have blogs. . . .Regarding “DISSERVICE FOR DEMOCRACY” there is little democracy in the US. The basic problem is not the poor quality of the candidates but a lack of democracy. The public quadrienilly(sp) gets a chance to vote for electors in a "college" who will elect a president for us, and then the public can sit down and shut up for four years (actually, usually eight) and allow this president to do whatever he/she chooses, only sometimes influenced by a bought-and-paid-for Congress. That's one thing which never changes -- the power of moneyed interests. Can citizens ever expect to have a voice in any national public matters? Heck no. Is there ever a referendum on going to war or medical care or anything of import to the citizens? Heck no.