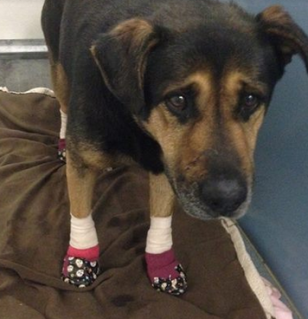 June 22,2016 (Potrero) – A humanitarian crisis is occurring in Potrero, where fire and law enforcement authorities continue to deny access to residents seeking to bring in feed and water for pets and livestock that are dying  of neglect in triple-digit heat within the evacuation area for the Border Fire.

Within the past hour, Colin Richard posted this message on the Potrero Town Feed on Facebook:

Agrarian (and non-agrarian) friends in San Diego County – a very ugly scene is unfolding around the west side of Potrero at the highway 94 and 188 Junction, with many Border Fire-affected farmers who have left town for supplies being turned away while trying to get back to their properties to feed and water the animals that are at immediate risk of dying from hunger and dehydration. The authorities prevented me from bringing in a small delivery of various animal feeds, which is not a very big deal, but they are also turning away locals who have water tanks and haybales in the back of their pickup trucks for their animals, which truly are their livelihoods and savings accounts.

The unbending bureaucracy of the situation is inhumane, demeaning and could devastate the lives of some of Potrero's farmers. Will be posting more about it later. Please PM me if you have any specific thoughts or ideas.

East County Magazine has been working behind the scenes trying to get help after hearing similar complaints from multiple sources in Potrero.  Our call to County Animal Services has not been returned; calls to other agencies and elected officials have produced some results, but it's not clear if it will be enough.

However this morning, Michele Clock with the County advised us that Border Patrol agents will be delivering some water and food to a farmer who e-mailed pleading for help.  But with phone lines and cell towers down, it is unknown if they have been able to reach her.

Teresa Greenhalgh with San Diego Rural Community Emergency Response Team (CERT)  (619)206-2358 has offered to help if anyone can provide her the exact locations of animals or people in need within the evacuation zone. “Although we DO NOT condone, nor support anyone staying behind, we also do not want to leave our neighbors abandoned,” she says.

Iris Gardener is in Potrero doing what she can for her neighbors and local animals left behind.  They heat has been brutal and she's already been faced with dying pets and livestock.  Here is her post just in a few minutes ago:

We need animal food here. Dog food, cat food, chicken, rabbit, pig... Still finding lots of animals, dead and alive without care. ... Just found 8 dogs, one dead, no water or food, also some chickens that were barely hanging on... I have enough hay but running low on other animal foods. Animal control seems to only be checking on places they get calls about and won't go into places they consider "dangerous". Any help would be appreciated if You guys can organize something. I'm just climbing over fences trying to find animals. Such a mess...

We are trying to contact our local Border Patrol agents who are there with large animal rescue and welfare checks.  Not sure it's going to work.  Is there anyone who can get some access to the Fire Area?   Iris lives just past the Post Office and Fire Station right off of 94.  We could even meet someone at the roadblock.

Lots of people have offered dog/cat food, hay, etc.  We just need a way to get it to her.

If you can help get supplies into the fire area, please reply this and I'll get word to her and others.

We can do this.

Yesterday morning, ECM received the following email from Jan Hedlun, a Potrero Planning Group member who did not evacuate.  She sent us an email headlined “TRAPPED” and stated:

We're trapped in Potrero. They're now shut down our only access to Tecate - Emery Lane where there's gas, food and cell access. They'll let us leave but won't let us come home. If you ask one agency they say another agency is in charge. We cannot get assistance!

We have no Red Cross help

No food for animals

We have no fuel

We have no support and more important

In 2007 I can understand why we can't go and come back as the 94 had burned but it's clear and there's no further threat in our area that we can ascertain.

One fellow that stopped by my property shared that it's going to take a week to get electricity - that 19 lines are down.

Also heard a rumor that the Verizon tower didn't burn but they've shut the signal down during the fire. Not sure about that one as it appears flames did get up to and around the tower.

If I didn't have satellite wifi I wouldn't be able to connect with anyone.

Though power has since been restored at least at Hedlun’s residence, she remains gravely concerned about animals left behind by people who obeyed orders and evacuated, as well as some who stayed behind with their many animals and have now run out of water and feed.

The Cebe Farms chicken ranch has lost thousands of chickens due to authorities denying access to trucks with shipments of feed, water, and initially, a generator, Joe Cebe Sr. told ECM. As many as 80,000 more chickens remain suffering.(See our story, Chicken Farmer Devasted by Losses --Again.)

ECM reached out to Supervisor Jacob’s office, Congressmen Hunter and Vargas’ offices, CalFire and to the San Diego Sheriff.  Michele Clock’s call came in response to our contact to Jacob.  Rep. Hunter’s aide, Holly Hough, offered to reach out to Senator Joel Anderson to try and get help for the people, pets and livestock in Potrero. (Note: We have since learned that Potrero is in Senator Ben Hueso's district, not Senator Anderson's district.)

Cal Fire has not responded, nor has Vargas’ office . Sheriff officials voiced concerns but have thus far continued to deny requests for access to the evacuated area, even to allow residents to leave and return with supplies for their animals, citing the potential danger if the fire, which has burned past Potrero, should double back due to shifting winds.

Volunteers organized by the Deerhorn Valley Antler editor arranged to pick up supplies donated by community members and indicated they would try to deliver them this afternoon.

Hedlun voices anger at the situation. “The magnitude of their ineptitude is staggering,”she concludes. “I thought, after the 2007 fires, that there had been multitudes of meetings in every place affected that would resolve issues of this nature.”  She praised firefighters for having better coordination to actually fight the fires than in 2007, as well as SDG&E for working to swiftly restore power. But she remains concerned about animals she has found that were dehydrated, with water dishes and horse troughs empty.

“Through the Potrero Town message board,we’ve kept in touch and been able to assure people about their homes, their family members,and done the best to take care of the animals,” she says, voicing frustration that even those best efforts by local residents hasn’t been enough to  prevent animals from suffering and dying.

Update:  June 22, 2016 2 p.m.:  County Animal Services Director Dan DeSouza provided this update: "We have already delivered supplies to Iris and can deliver more if necessary. It is inherent upon the animal owners to contact us either directly or through someone that has phone service to provide us with their address, types of animals, and numbers of each.  We have teams in the evacuation areas for the past few days providing food and water to those animals that we know of.  As for the chicken ranch, the San Diego Humane Society had taken their generator out to the site on Monday.  I  being told that the owner was allowed on the property yesterday and that water has also been provided. We are doing everything within our powers to rescue any animal that is in danger and to provide food and water to those left behind that are safe."

When will the rural communities of San Diego County learn to bypass County Animal Services. After every fire there are meetings about what to do and how to do things better. The inability to get to the animals or to get care or food or water to the animals left behind is always at the top of the list. Then someone gets the bright idea to invite County to a meeting and everything comes to a grinding halt. "Big Brother will do it all for you!". They are never going to be able to do it all. They are never going to support local efforts to help yourselves. Meet, Organize and Plan so that when someone can't get back in or can't get all of their animals out, the community is not floundering, waiting for County to do something. If they couldn't manage a fire this size what do you think is going to happen if we have a repeat of 2007? I am sure that by day 2 or 3 of the next fire County will have all 4 or 8 of their trailers ready to rock and roll and save the 40,000 horses that are at risk that have not already died. They talk a good story, and I am sure they want to do a good job, but they want to do it all by themselves. They shut down every local effort and they don't have the resources or the knowledge or the ability to rescue the number of animals that need to be saved in a large fire. If you don't organize your community it will be your animals that pay the price for San Diego County Animal Service's arrogance.

Get those installed for Potrero, which lost cell service, land lines and electricity in both this fire and the 2007 fire.  They have only one highway in or out,and when it shuts down and fire occurs, they are very vulnerable, left totally without communications except those on satellite.

I've seen cell antennas that have underground power and phone lines etc designed to survive a fire.
Find out and write down your GPS coordinates, responders will know exactly where your property is.
https://play.google.com/store/apps/details?id=com.gpscoordinatesandlocat...