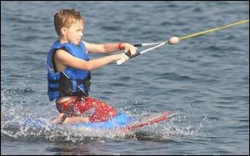 During the four-and-a-half hour session, Padre Dam officials said after six years of study, they have concluded that environmental impacts such as noise and traffic would be minimal. The overflow crowd included several Santee residents and numerous wakeboarders and coastal wakeboard shop owners speaking in favor of the measure, as well as many are residents who voice concerns that the project would negatively impact their quality of life. (For details on the proposal, see our previous story at http://www.eastcountymagazine.org/?q=node/1640.)

Nineteen community members spoke against the measure, including 18 Santee homeowners. Mayor Voepel voiced concern over traffic and parking, as well as plans for a restaurant to serve hard alcohol nightly until 11 p.m.

“The deal breaker would be if Sudweeks Development does not change their contract with Padre Dam to exclude hard alcohol from the restaurant and serve only beer & wine,” said Santee resident Julie Naggar, who opposes the cable ski and wakeboarding facility, noting that Sudweeks may balk at losing revenues from hard liquor sales. The Mayor also requested that the restaurant & pro shop be moved to the North side of Lake One instead the West end to lessen noise & minimize view obstructions. “If Sudweeks cannnot comply to these changes, then it may get voted down,” Naggar said.

She added, “We are not done campaigning against this. We handed out over a thousand flyers in the neighborhood prior to the meeting last night.” In addition, opponents plan to start a petition drive to “show the Mayor & Councilmembers at the next meetingt the community is truly against this,” she revealed, adding, “They just don't seem to be listening.”

It's interesting that the only City Council member to come out wholeheartedly in favor of this project is Brian Jones - the only member also who has taken campaign contributions from Sudweeks Development and Alan Carlisle, head of Santee Lakes. Coincidence? I think not! Apparently he's in violation not only of the state limit but also the more restrictive limit set by the City of Santee.
He also took money from the developer of the Rattlesnake Mountain project while that issue was underconsideration by the council. How ethical is that?
Also, no one who would be directly affected by the noise, traffic, parking issues and drunks leaving the restaurant is in favor of this project.
It's been very quiet over at City Hall regarding where this project is going.

Dear daylilydiva, I hope you are able to attend the town hall mtg on Oct 28th. There is a group of us that will be handing out "NO" stickers prior to the meeting. Of course we're not holding free pizza parties like Sudweeks...... He also has a website where he is asking for supporters of his development from outside of Santee which I don't think should even be allowed. How are their home values, kids safety & quality of life affected by this project. Please try to recruit as many people to this mtg as possible.

As an avid waterskier of 50 years, my family has enjoyed one of the best family- oriented sports. While ownership of a high-end wakeboard boat may be out of reach for most, the cable-park concept would be affordable for young and old alike. As I have only brief knowledge of the proposed park at Santee Lakes, the resturant shouldn't be focal point. Look at the aquatic-center @ Mission Bay offering positive activities for young people. Maybe a look at the Orlandowatersports.com web This may be the best cable park in the world, and may offer ideas for a sustainable business in a residential area. It would seem a good fit for the community if done right, just as much as fishing.

Great idea, bad location. I agree that this would be a great activity for kids & families. Although not all kids would be able to afford it but most importantly it doesn't belong in the middle of a residential neighborhood. You mention Mission Bay or the Orlando Water Sports park, neither of which sit in the middle of a residence. What comes with this development is a licensed restaurant which will remain open until 11pm 7 days a week. That is where the developer plans on making most of his money at our expense. The residents who live around the lake will have to put up with the noise, trash, overflow parking & people drinking & driving on our streets where children bike, walk & skateboard to & from to the park every day.

If I am reading this right you don't want people to be allowed to have mixed drinks (after all "hard alcohol" is placed in a mixed drink, right?). But they can have a beer? That just isn't fair! Irresponsible people can just just as drunk off of beer and wine.

For your information not everyone cares for beer or wine. For example my wife can't stand the taste of both beer or wine. But she will occasionally have a mixed drink.

If customers aren't allowed to have daiquiri or a margarita with their dinner, then nobody should be allowed to order a beer or wine. Don't discriminate against someone because of their taste buds!

P.S. I am in favor of this project. I think that restaurant would be a beautiful place to have dinner. :)

Signed,
A neighbor in close proximity to the lakes.

The request to not sell hard alcohol came from the Mayor. A lot of the surrounding community does not want the sell of ANY alcohol at a restaurant that will stay open until 11pm 7 nights a week that sits in the middle of a residential family neighborhood. Unfortunately the irresponsible ones always ruin it for the responsible ones. Is it worth risking the safety of our children; there's a water park at Lake 1 where children run around, kids of all ages are coming & going to the park daily on their bikes & skateboards. How about the noise & trash when people are "hanging out" all day at the park & drinking at the restaurant. These are just some of the issues that were discussed at the Town Hall mtg. Have a read at the article written on July 3, 2009 at www.10news.com on since the booze ban at the beach, more families are coming to the beach since they don't have to deal with obnoxious behavior & the overall atmosphere has improved for residents, businesses and beach goers.