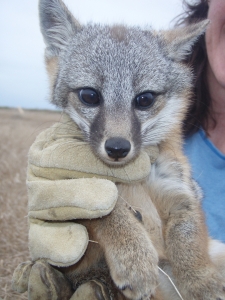 
“The Island Fox recovery is an incredible success story about the power of partnerships and the ability of collaborative conservation to correct course for a species on the brink of extinction,” said U.S. Interior Secretary Sally Jewell, who visited Channel Islands National Park in March with fourth graders participating in the Every Kid in a Park program to witness fox conservation efforts. “The Endangered Species Act is an effective tool to protect imperiled wildlife so future generations benefit from the same abundance and diversity of animals and plants we enjoy today. What happened in record time at Channel Islands National Park can serve as a model for partnership-driven conservation efforts across the country.”

In the late 1990s, endemic island fox populations on San Miguel, Santa Rosa, Santa Cruz and Santa Catalina islands – four of the six Channel Islands they inhabit – plummeted by over 90 percent to catastrophic levels. At the low point, fox populations had dropped from 1,780 to only 15 individuals on Santa Rosa Island, from 450 to 15 on San Miguel Island, and from more than 1,400 to 55 on Santa Cruz Island. The decline was due primarily to predation by golden eagles (which had moved in to fill a niche in the ecosystem that had been vacated by loss of bald eagles due to the pesticide DDT) and a canine distemper outbreak on Santa Catalina Island.

Listing of the four Channel Island fox subspecies in 2004 stimulated a focused, partnership-driven conservation effort involving the National Park Service, The Nature Conservancy, Santa Catalina Island Conservancy and Institute for Wildlife Studies. Almost immediately, fox populations began to improve due to a variety of efforts including captive breeding programs and vaccinating foxes against canine distemper. Today the San Miguel, Santa Rosa and Santa Cruz island subspecies are fully recovered. The fourth subspecies, the Santa Catalina Island fox has now been down listed from endangered to threatened.

“It’s remarkable to think that in 2004, these foxes were given a 50 percent chance of going extinct in the next decade. Yet here we are today, declaring three of the four subspecies recovered and the fourth on its way,” said Service Director Dan Ashe. “That’s the power of the ESA – not just to protect rare animals and plants on paper, but to drive focused conservation that gets dramatic results. More than 300 experts, non-profit organizations, state and federal agencies came together to not only prevent the extinction of Channel Island foxes, but to fully restore them in record time. That’s something to celebrate!”

“The decline of the island fox, one of America’s rarest mammals, was rapid and severe,” said National Park Service Director Jon Jarvis. “Captive rearing, an unprecedented emergency action was critical to saving the species. Efforts to restore balance to the island ecosystem ensured their survival.”

“The remarkably rapid recovery of the island fox shows the power of partnership, focus, and science,” said Scott Morrison, Director of Conservation Science at The Nature Conservancy. “Many aspects of this recovery effort – from its scientific rigor to the collaborative enterprise that drove it – can serve as model to advance conservation elsewhere.”

The partners embarked on an ambitious effort to restore balance to the island ecosystem, which included reestablishing bald eagles to their historic island territories, removing feral pigs, and relocating golden eagles to the mainland. Also at the core of the recovery was a captive breeding and release program, which reintroduced 226 foxes to the wild. Captive and wild foxes were also vaccinated to prevent the spread of canine distemper.

As of 2015, there were approximately 700 foxes on San Miguel Island, 1,200 on Santa Rosa Island, and 2,100 on Santa Cruz Island. The Santa Catalina Island population is estimated at around 1,800 foxes; however disease remains an ongoing threat to this subspecies.

In March of 2015, the Service collaborated with Channel Islands land managers and stakeholders to publish the final Recovery Plan for these island fox subspecies. This plan equips land managers with tried and true methods to protect island foxes into the future, including an epidemic response and golden eagle management strategy.

The final rule is available in the Federal Register Reading Room today under docket number FWS-R8-ES-2015-0170 and will officially publish on August 12, 2016.

The Endangered Species Act is an essential tool for conserving the nation’s most at-risk wildlife, as well as the land and water on which they depend for habitat. The ESA has prevented more than 99 percent of the species listed from going extinct, serving as the critical safety net for wildlife that Congress intended when it passed the law more than 40 years ago. In addition, the ESA has helped move many species from the brink of extinction to the path to recovery, including California condors, Florida panthers and whooping cranes. The Obama Administration has delisted more species due to recovery than any prior administration, including the Oregon Chub, Virginia northern flying squirrel, brown pelican and now three Channel Islands Fox subspecies.

The Island has great restaurants and shops on Crescent Avenue. Take a tour of the island and you'll see some wildlife and scenic views. Me and two friends stayed in a furnished house for four days.
http://www.visitcatalinaisland.com/activities-adventures/two-harbors/saf...