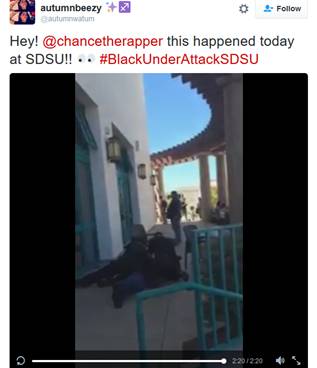 September 15, 2016 (San Diego) — An arrest at San Diego State University today sparked protests after videos posted online showed SDSU police officers forcing the African-American man, who was not a student to the ground.  Videos posted on the Daily Aztec show the man standing on a balcony at the student center near where the rapper Chance was slated to perform when he was tackled from behind.(Warning, strong language). Video does not show events leading up to the incident.  The man, whose identity has not been released, shouted to the officers, “You’re breaking my arms!” and insisted he didn’t do anything wrong. He was arrested after the take-down.

Students took to social media with the hashtag #BlackUnderAttackSDSU.  But SDSU’s president Elliott Hirshman issued a statement indicating the man had jumped a construction fence and had been reported by two callers to be acting erratically.

Hirshman continued, “The officers arrived at the scene and determined the person appeared to be under the influence of a controlled substance. In their attempt to arrest the person, he resisted and the officers restrained him until backup could arrive.

The calling of backup is required any time an officer is engaged in a physical confrontation. Several more officers arrived on the scene to assist with the arrest. The arrested individual is uninjured and was transported to the San Diego County Jail.”

He added, “The use of force in an arrest is a significant matter and we understand the concerns members of our community have expressed about the arrest. Consistent with department policy, this incident will be evaluated and reviewed by the field supervisor, a lieutenant, a use-of-force expert and the Chief of Police.”

The Division of Student Affairs, University Police and Associated Students will be reaching out to student organizations and other campus groups to continue dialogue and expand programming around this issue, Hirshman said.  Students who feel vulnerable or need assistance in finding resources on campus, please reach out to the Dean of Students, Dr. Randy Timm at deanofstudents@mail.sdsu.edu, or (619) 594-5221. In addition, members of our Counseling and Psychological Services staff are available to provide support for all concerned members of our campus community. Counseling and Psychological Services can be reached at (619) 594-5220 or psycserv@mail.sdsu.edu.

The only video that plays is the officer speaking, were the others taken down?

Try again; maybe there was a temporary glitch.