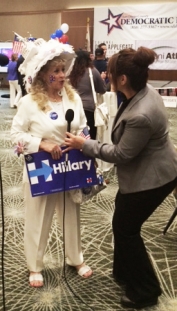 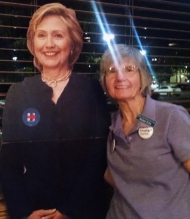 Photo, right, byMiriam Raftery:  Bonnie Price ,a  long-time leader in the East County Democratic Club, poses for a photo with a cut-out of Hillary Clinton at Jimmy's Restaurant in Santee, where local Democrats gathered to celebrate breaking the ultimate glass ceiling--a milestone that now remains for the future.

Photo,  below, by Jonathan Goetz:  Mara Elliott speaks to Democrats at the Westin Hotel following her victory. 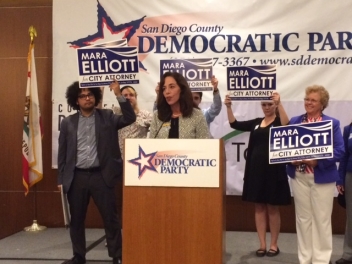 In her concession speech the next morning, Clinton reflected that while she didn’t “shatter that highest and hardest glass ceiling,” she offered hope that it would happen some day, adding,“And to all the little girls who are watching this, never doubt that you are valuable, and powerful and deserving of every chance and opportunity in the world to pursue and achieve your own dreams."

My Grandmother was an original "Suffragette" and voted Republican her entire life. Since she died, however, she has voted Democrat.