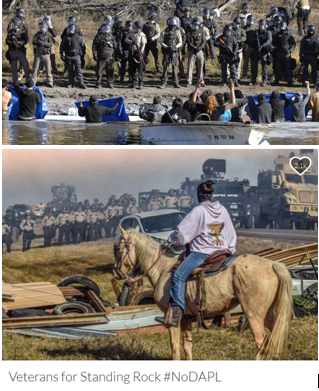 “Bring body armor, gas masks, earplugs (we may be facing a sound cannon) but no drugs, alcohol or weapons…if we don’t stop it, who will?”—Wesley Clark Jr., a veteran and son of retired four-star U.S. Army General Wesley Clark Sr., former Supreme Allied Commander in Europe

The water protector activists have faced brutality at the hands of a militarized police force in recent days, including spraying a water cannon in below-freezing temperatures.  Three hundred people have been injured and 26 hospitalized, including a 21-year-old girl hit by a concussion grenade whose bone was shattered and now faces possible amputation of her arm.

“Bring body armor, gas masks, earplugs (we may be facing a sound cannon) but no drugs, alcohol or weapons,” states the event page organized by Wesley Clark, Jr., a veteran who is the son of retired four-star Army General Wesley Clark Sr., former Supreme Allied Commander in Europe.  He asks, “…if we don’t stop it, who will?”

The site  invites veterans everywhere to join the effort, stating, “We are veterans of the United States Armed Forces, including the U.S. Army, United States Marine Corps, U.S. Navy, U.S. Air Force and U.S. Coast Guard and we are calling for our fellow veterans to assemble as a peaceful, unarmed militia at the Standing Rock Indian Reservation on Dec 4-7 and defend the water protectors from assault and intimidation at the hands of the militarized police force and DAPL security.

If you would like to join us please fill in this form ASAP and we'll be back in touch with more information and next steps   https://goo.gl/forms/C1VD7ZDQpp0PgfQ42  “

Clark has also launched a GoFundMe page for the deployment, to provide materials support to all veterans wanting to join the Standing Rock protest from around the country. So far, $96,000 has been raised.  Clark Jr. is also an activist leading the fight to halt climate change.

The pipeline would carry over half a million barrels a day of crude oil beneath the Missouri River. Initially it was slated to go through Bismark, a white community, but after objections over possible water contamination there were raised, the route was changed to go on land sacred to the Standing Rock Sioux in an area where a pipeline leak or burst would contaminate drinking water for the Standing Rock Sioux reservation and several other tribes along the Missouri River. Tribes contend this is racism on its face,  NPR reports.

Construction has been delayed for months as thousands of activists including hundreds of tribes across America as well as representatives from environmental groups, labor, and now veterans join in the fight to protect drinking water supplies as well as sacred Native American sites.  Tribal members have been arrested and roughly handled by police even while conducting prayer circles or attempting to reach sacred sites.

The U.S. Army Corps of Engineers has not issued a final easement required for construction and President Barack Obama has said he will consider rerouting the pipeline. Yet the Obama administration has done nothing to intervene in the heavy-handed tactics by law enforcement and private security officers hired by Energy Transfer Partners, which previously loosed attack dogs on some demonstrators.  Tribes contend the government failed in its duty to consult with the Standing Rock Sioux.

Dave Archambualt, chairman of the tribal council of the Standing Rock Sioux, has said “Every time there’s something like a confrontation and life is being threatened, I think the government is going to do what they can to try to end this before someone gets killed,” he said. “Aggression by law enforcement has always been intentional to force the government to give the easement…It’s escalating more and more to the point where law enforcement is not really concerned with human life.”

Activists and journalists have the scene have reported the unarmed activists have remained peaceful.  Authorities contend that burning logs and propane tanks constituted weapons, though tribes and others at the scene have insisted these items were needed to stay warm in sub-freezing temperatures.  Use of a water cannon—reminiscent of the fire hoses blasted on Civil Rights protesters in the south during the ‘60s, could have lethal impacts here due to the frigid weather.

The story of U.S. veterans taking a stand to join the Standing Rock Sioux has been picked up by major U.S. and international media including CNN, NBC, and Reuters. 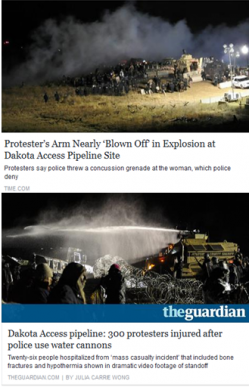 Senator Al Franken has called on the Department of Justice to protect the safety and First Amendment Rights of Dakota Access Pipeline protesters. “The reported use of water cannons for crowd control in sub-freezing temperatures is excessive and unnecessary,” he stated in a letter to Attorney General Loretta Lynch. ”Native America populations have struggled for decades under the complex burden of historical trauma,” he stated, adding, “I urge you to do everything in your power to prevent further escalation of violence.”

Some who were detained have also faced degrading and humiliating treatment, including young women strip-searched, people left naked in cells overnight and confined in what some described as dog cages.

“It’s absolutely a blatant disregard for the safety and humanity of unarmed protesters,” said Jen Cook, policy director for the ACLU of North Dakota. “In combination with other tactics, it’s a misuse of less-than-lethal weaponry … It’s unjustifiable.”

Vermont Senator Bernie Sanders has called for President Obama to halt construction and declare Standing Rock a National Monument. View video. The Bernie Sanders Brigade has been organizing relief supplies for those encamped at Standing Rock, including a San Diego chapter.

Nearly all local tribes are participating in efforts to support the Standing Rock Sioux including financial donations and sending members to join activists at the front lines.  Local Kumeyaay tribes have also organized multiple caravans of relief supplies led by Bobby Wallace of Barona.  Hear our interview with Wallace, conducted in early October:  http://www.eastcountymagazine.org/local-tribes-send-caravans-aid-standing-rock-sioux-opposed-dakota-pipeline

President-Elect Donald Trump has made no statement on the situation.  The Guardian reports that Trump has invested in Energy Transfer Partners, operators of the Dakota Access Pipeline and that the company’s chief executive donated over $100,000 to Trump’s presidential campaign.

A list of actions you can take to stand up for the Standing Rock Sioux is posted here, including a White House petition to sign, phone numbers to call the White House, and a donation site: http://standwithstandingrock.net/

Here's the Amazon wishlist for the water protectors at #StandingRock..Blankets and heaters are a HIGH priority...#NoDAPL https://www.amazon.com/gp/registry/wishlist/284OV04OWXQG9/

It is so encouraging to see this story given Corporate Main Stream Media and pretend Journalists that they employ refuse to cover what's happening there! We sure heard plenty from MSM about the Bundy's though didn't we!