Part II in our series on the Ocotillo wind turbine collapse

November 22, 2016 (Ocotillo) – Ocotillo Wind Energy has issued a statement on its website after collapse of a massive wind turbine Monday at its Ocotillo, California energy project site.  The statement indicates the turbine fell within the designed setback zone and no one was injured. Officials say they are working closely with Siemens, the manufacturer of the collapsed turbine, to identify the cause of the failure, with a “full investigation” underway.   The company said safety is its “first priority” and that more information will be released as it becomes available, KYMA TV reports.

Both this project and Siemens have a history of serious problems, however, leading to questions of whether federal or state oversight is needed to protect public safety.

Ocotillo Wind, built by Pattern Energy, previously had a wind turbine fire in January 2015 and an 11-ton blade hurled off onto a public trail in May 2013, among other mechanical failures,  as we reported at the time. 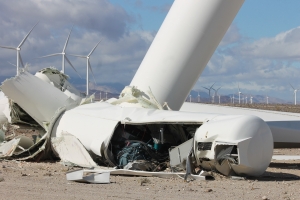 Siemens, the manufacturer, has a history of numerous other recent failures including:

In 2014 the company took a financial hit after multiple blade problems due to an issue with bearings.

A nacelle and blades broke off an offshore Danish wind farm  turbine and fell into the sea in November 2015.

In 2007, collapse of a Siemens wind turbine under construction in Oregon killed a worker.

In addition, 64 Danish workers at a Siemens factory developed chronic illness after exposure to chemicals, according to the Copenhagen Post, which stated, “Siemens has confirmed it illegally used isocyanates during the manufacturing process for wind turbines from 2003 to 2011.”

Edie Harmon was outside her home five miles south of the Ocotillo Wind facility Monday morning when she heard the turbine collapse.  It sounded like “a massive explosion.  I thought a military jet had crashed to the ground,“ she said in a phone interview with ECM.

When she drove home that night, after the project was deenergized, she said she did not see lights on the turbines, raising concerns over whether a low-flying plane could strike them.  Lights are required by the FAA due to proximity of an air field nearby.

Harmon also voiced concerns over leakage of toxins into the ground and the aquifer below that provides the town’s drinking water, after such a major explosion, and whether any governmental agencies will be making sure hazardous waste cleanup is done.

Siemens did not respond to our request for comments on its troubling safety record.

Tear them all down! The whole project was a scam as we all now know and has never delivered the power Ocotillo Wind Energy lied about.