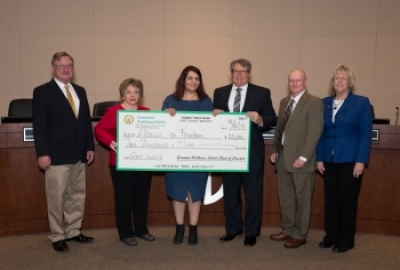 February 7, 2017 (East County) –  The Grossmont Healthcare District (GHD) has awarded a $10,000 grant to License to Freedom, an El Cajon-based nonprofit that assists Middle Eastern refugees and immigrants with cultural assimilation and health education.

The grant will support License to Freedom’s community outreach efforts, particularly as they relate to cultural adjustment to American healthcare norms. Outreach includes providing culturally competent health education classes taught in Arabic to recent refugees and immigrants now living in the East County. Taught by existing refugee healthcare workers, pastors and social workers, the classes will cover the basics about the U.S. health system. Classes will emphasize the availability of healthcare services at nearby community clinics and urgent care centers, instead of hospital emergency rooms.

Classes also will cover hospital emergency room protocol, according to Dilkhwaz Ahmed, executive director, License to Freedom. “If a family member goes to an emergency room, it is the custom of Middle Eastern community for the entire family to show up in support, but this can put a strain on the facility because American privacy regulations do not accommodate this cultural practice,” Ahmed said.

She said classes will be held at churches, parks and community centers. The funds will also support advertisements addressing cultural adaptation to refugees through Arabic newspapers, radio programs and social media channels.

Ahmed said some of East County’s recent refugees will be escapees from Syria’s nearly six-year, multi-sided civil war between government forces of President Bashar Assad and Muslim militants of the Islamic State. She said some Syrian refugees now in the East County will be from among the estimated 12 million displaced civilians who have traveled to the U.S. through Europe. Ahmed also said other populations supported by the GHD grant include refugees from Afghanistan, Iran, Iraq and Turkey.

According to data from the county Health and Human Services Agency, San Diego County saw a 64 percent increase in refugee arrivals in October and November compared with the same months last year. The top three refugee groups in the county are arriving from Iraq, Syria and Afghanistan.

License to Freedom was founded in 2002 by Ahmed, a Kurdish immigrant with a background in psychology who was a women’s rights activist in Iraq. For more information on License to Freedom and its programs can be found at LicenseToFreedom.org.

The Grossmont Healthcare District is a public agency that supports various health-related community programs and services in San Diego’s East County region. Formed in 1952 to build Grossmont Hospital in La Mesa, GHD serves as landlord for the hospital property and buildings on behalf of East County taxpayers. The District is governed by a five-member board of directors, each elected to four-year terms, who represent more than 500,000 people residing within the District’s 750 square miles in San Diego’s East County region. For more information, visit www.grossmonthealthcare.org.

Good actions by GHD and License to Freedom.
Thanks to Ahmed for his efforts.