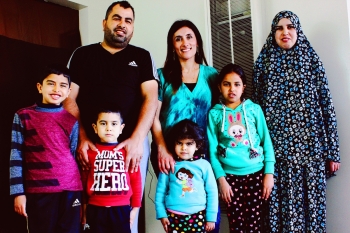 February 5, 2017 (El Cajon) -- Falafel softly crackles and pops in the frying pan as the smell of tahini infuses the air at Cajon Terrace Apartments. While the kids practice their ABCs and numbers in their new living room, a Syrian husband and wife cook side by side.

The Al Saleh family underwent extreme vetting to leave Jordan and escape Syrian soil. They were interrogated for 18 months, with intense background screenings and fingerprinting.

Fatima Albazazi and Tamer Al-Saleh applied for asylum through the United Nations (UN) with their children: Aya, 9, Hassan, 8, Houssein, 6, and Ilaf, 3. After leaving their war-stricken country, they sought refuge in Jordan, where they lived for five years, only spending a month in a refugee camp.

As the seasons changed from May to September, the intake of refugees rapidly increased. Roughly 200 families, about a thousand members in total, settled into San Diego’s neighborhoods, specifically El Cajon and City Heights. Upon arriving, these Syrian families are funneled into various motels. Some cases stayed as long as 50 days, while others resided for weeks at a time.

“It was really hard on me. We stayed in the motel for about two weeks, and the motel was in pretty bad shape,” Tamer said.

Tamer was shocked by San Diego’s cost of living, for San Diego has the highest number of refugees annually of any welcoming city. As they arrived, Alliance for African Ass 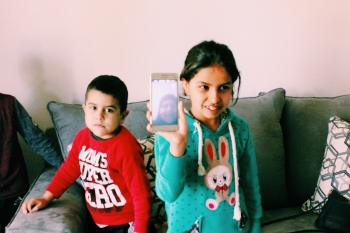 Resettlement agencies are too overwhelmed to aid in this portion of the assimilation process. Heart4Refugees was launched to fill this loophole. The organization has helped about 41 families in City Heights, and 130 plus in El Cajon. It’s a local branch of the Syrian Community Network (SCN) started by Bayanne Mihtar and Kinda Arzon.

“It wasn’t like he chose to come to America. The U.S. chose the people to come here. So they didn’t choose to come here, they were chosen by the U.S., by the UN.,” Kinda Arzon, Vice President of Heart4Refugees, said.

“Everybody wants to help. You know we all have a heart for refugees, and that’s how the name came up.”

A man who was staying at the motel became fed-up one day, Arzon said, dragging his suitcases to the street curb, with tears streaming down his face. Rent affordability is the main concern for these families.

Mihtar put her interior design career on hold in September 2016 to fill in the gaps of these government funded resettlement agencies. While SCN was created in Chicago two years ago, Mihtar and Arzon launched the Syrian family adoption initiative on social media.

“We just asked `What do you need?’” she said, “and we’ll make them a welcome list. Basically with each family, for instance El Cajon, we take their inform 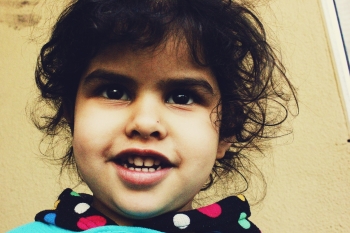 ation. If they have a special needs person, if they’re receiving rental assistance, and anything they receive from us we check it off.”

The process is relatively swift for potential adoptive families. It costs $19 for a background check, and the only requirement is consent on a confidentiality form. Heart4Refugees pairs families with similar interests and needs. Some individuals are eager to help, but can’t commit full-time. They can volunteer every other week, or meet only once to exchange necessary supplies.

“But we prefer, obviously, an ongoing relationship, so they can assimilate. I know that one of the families that were adopted found a job through their adopted family, so that was incredible,” Mihtar said. “That’s our end goal is to try to get them jobs, maybe learn some English through this process, and just get them up on their feet quicker than they would without this program.”

As the dust and glitter settled from New Years, Vaale Gafori felt compelled to respond to a Heart4Refugees Facebook post. She’s been friends with Arzon for a couple years now, and in 20 minutes of seeing her post that day, she adopted a family. The Al-Saleh family and Gafori were destined to be connected, Arzon said.

“I've always done the whole adopt a family for Christmas. [You] buy them presents, you never see them. You don’t know if they really got it; you don’t know who’s behind it,” Gafori noted.

“I've always done that, and it left me feeling kind of empty afterwards. So when she brought this up, and then said but you get to go and meet them, and be with the 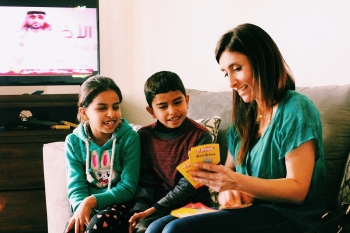 m, I said that is the greatest thing!”

Heart4Refugees has three dual language case managers, who can facilitate proper translation between both families. However, some participating families have successfully used Google Translate, or coordinated with other individuals to break down the language barrier.

“I wanted to make a connection with the local San Diegans here and let them know about this, so through that people reached out to us. It was a success. They reached out to us and said, what can we do more? Can we adopt them for the holidays? And I said okay sure, let’s start that. Literally everything happened organically, and we said let’s just start an adopt a family program,” Arzon said.

Arzon created a case management system using the app Trello, which is a virtual tool to stay organized. Here, lists are kept of specific household necessities, or special needs that each family requires. Gafori was determined to make them comfortable during the acclimation process. And by the click of an email, their dining room table, living room set and dresser was donated by Jerome’s, a local furniture company. 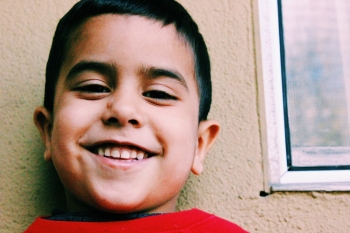 ants to help people. We love her. Even the kids love her, we just feel that she’s a very kind loving person who wants to help them,” Tamer said.

In the last two months, the organization has donated $86,000 to 96 families through their rent supplement program. The government funded resettlement agency grants each family member a one-time subsidy of $1,125. This donation is supposed to support them for three months, Mihtar said, and it’s not enough, especially considering they’re supposed to payback the government for their airfare to America at the end of this time frame.

“First thing he said to me is he wants a job. He wants to work. Before anything else, thank you for bringing me the stuff, I need a job. So he was really interested in doing that because I think he wants to support his family. It’s important to him,” Gafori said.

As her friend, who is a professional interior designer, tied the knot in Italy, Gafori sent a congratulatory text. She quickly turned around and inquired about a job for the father of her recently adopted Syrian family. And 30 minutes later, her friend landed Tamer a tiling job.  The hiring manger picked him up the next morning for his first day.

“So my big push for 2017 is to get them employed. I’d love to have like a job fair for them with hospitality, and some other kind of careers that don’t involve the language as much. I mean they want to learn the language. It’s just going to take some time,” Mihtar said.

The Al Saleh family left Syria to give their children a chance for freedom. Gafori has been their angel in a life of darkness, they said, and she has become a true friend. While they left behind familiarities in the Middle East, their San Diego neighbors have generously donated money, a car and essential necessities, giving them a shot at a new life.

“I think the important thing is to realize that they’re just people; the word `refugees’ doesn’t mean anything, it just means they’re people that came here that need a chance, and we need to help them,” Gafori said. “And she [Arzon] said the most beautiful thing: ‘Once they get a job, they’re no longer refugees.’”

through the years.  We interviewed advocates for San Diego's homeless last year on our show and again in January; the latter will be posted on our site soon.

We've covered the Stand Down event for homeless vets in the past and interviewed Pastor Brown who runs the East County Transitional Living Center for the Homeless. We covered several holiday drives in Nov-Dec. to help the homeless, too.  One of our very first series back in 2008 when we launched was a set of interviews with homeless people across East County.

We also helped bring veterans' services to rural libraries through our investigative report on the lack of such services in East County.  Also coming up,  we'll be doing a story on the issue of painkillers killing many of our injured veteran.

We care deeply about all people who are suffering and in need.

Since you apparently missed our past homeless coverage, this link has many pages of stories we've done on the homeless thrugh the years:  http://www.eastcountymagazine.org/search/node/homeless

I am waiting for this "publication" to spend at least 1/2 as much space on OUR homeless and homeless vets as they do immigrants. Until recently when it became politically correct to remove the term illegal from illegal's we had ALWAYS controlled our immigration. Anyone heard of Ellis Island? Remember when we vetted EVERY Irish immigrant from the potato famine? There are 100's of millions of people in the world who live in war, or, poverty, or filth. Do you think filling up our country with them is going to solve the problem? I would suggest if you really cared you would go to or support people who go to their country and help them help themselves. You know, that old teach people to fish thing from 2000 years ago. But then we all know you won't. You will just sit home and whine how terrible our new President is.