March 5, 2017 (San Diego) -- On the evening of March 1, the organization Stay Cool 4 Grandkids hosted speakers who presented on two climate change topics. Representatives from Kids 4 Planet Earth spoke about their goal to have school children send one million letters to President Trump by Earth Day, telling him how important it is to them that he address climate change. Please help their request to go viral by sharing this goal on Facebook and other social media outlets.

The next speaker on the agenda was Dr. Lisa Levin, professor and researcher at the Scripps Institute of Oceanography. Dr. Levin spoke about the effects of climate change on the oceans, saying her concern is that this issue doesn’t get as much press as climate change’s atmospheric effects. It’s accurate, she says, to call the Earth “Planet Ocean,” as most of world’s habitable volume is in the oceans.

She also pointed out that climate change is not exactly a new subject, illustrating this with a picture of Roger Revelle shaking hands with President Lyndon Johnson, taken in 1965. Dr. Revelle’s message to the president was that the makeup of the Earth’s atmosphere was changing and we were responsible. 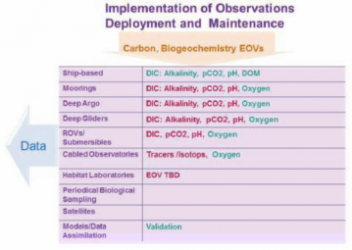 As for the oceans, Dr. Levin said that climate change is imposing four major stressors as a result of the increase in atmospheric CO2:

The oceans absorb about 93% of the heat we are releasing through the burning of fossil fuels. Astonishingly, half of all the heat released since the Industrial Age began has been emitted between 1997 and now. The amount of energy the oceans are absorbing is equal to five Hiroshima size bombs going off - every second since 1997.

The oceans have lost 2% of their dissolved oxygen, on average, since the 1960’s. The loss is not uniform by any means, with some areas much worse than others. Part of the loss is due to the increase in water temperature, as the solubility of oxygen in water decreases as temperature rises. This factor accounts for about 15% of the loss. The other 85% is due to ocean stratification, and much of that due to the influx of fresh water (again, due to atmospheric warming of sea ice, for instance). The fresh water dilutes local salinity and leads to density stratification, and that, in domino-like fashion, leads to enhanced oxygen loss.

Warming ocean waters are also beginning to thaw methane hydrates on the sea floor. The released methane provides a food source for microbes, which in turn consume dissolved oxygen. Another negative contribution comes from iron and nitrogen blowing and washing into the oceans. These elements contribute to outsized phytoplankton blooms. The phytoplankton eventually die, fall to the bottom, and take oxygen with them (as part of their bodies).

Dr. Levin then asked: why do we care about oxygen concentration in the sea? Well, because all ecosystems in the oceans are dependent on this concentration. In the face of decreasing oxygen, fish don’t get as large. The size of their habitat decreases—the largest mass migrations in the world occur daily, that being schools of fish going from shallow waters to deep and back again. As oxygen concentrations decrease (and the loss is enhanced in deeper waters) this daily migration range is compressed, with adverse effects on many interdependent aspects in the environment. In the end, this negatively affects the fish populations we rely upon for food.

Turning to ocean acidification, Dr. Levin said this phenomenon comes about because the oceans absorb 26% of the CO2 we are emitting. Currently, atmospheric CO2 is about 408 ppm. If the oceans were not absorbing it at the rate they have been, atmospheric CO2 would exceed 500 ppm. 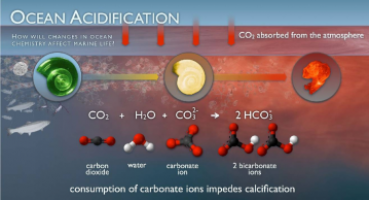 As the ocean’s pH falls, much of the damage takes place on the ocean floor. Carbonate ions decrease as one result, which adversely affects the shellfish and other creatures that need these ions to form their shells. Coral reefs are affected, of course, and while Pacific reef loss such as the Great Barrier Reef is well known, another highly threatened structure is the Norwegian corals. When carbonate ion loss is combined with bottom trawling, the loss is all but complete. In response, Europe has recently banned coastal bottom trawling. 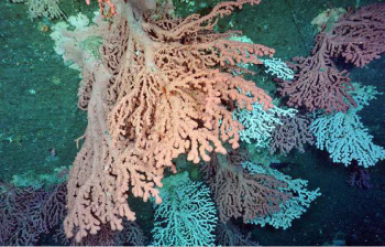 Furthermore, nutrients swept up in freshwater runoff, mostly fertilizers, are exacerbating the oxygen loss and acidification problems, through a process known as eutrophication. All these factors result in the aforementioned multi-stressor situation in the oceans. Some areas are affected by only one of these four stressors, but often two or more stressors are present, combining their effects in ways that are yet to be fully understood.

The bottom line, Dr. Levin said, is that if we are to have a healthy atmosphere we must have healthy oceans. It’s not too late to resuscitate the oceans, even though much damage has been done. Her charge is that we must engage the next generation of ocean scientists to carry on the research and expand our understanding. In addition, the awareness of ocean literacy must be increased globally. To this end, many organizations have taken up the banner; here are four of them:

clean water, air, habitat preservation and energy efficiency are important, using and poisoning young minds is beyond the pale