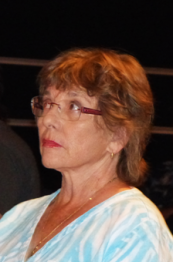 Hear our interview, originally aired on KNSJ radio, by clicking the audio link, or scroll down for highlights.

At a town hall meeting held by Rep. Duncan Hunter (R-Alpine), she announced plans to challenge him for  his seat – and passed out a pill bottle with her remedy to fix Congress:  “restoring integrity, providing affordable healthcare, creating more jobs, and protecting Medicare and the rights of Veterans.”

Voters couldn’t ask for a greater contrast.  Hunter, at his town hall, said he doesn’t believe healthcare is a right, but merely believes in “access” for those with the ability to pay for it. Chadwick describes herself as a “nurse warrior” who has been a fierce advocate for her patients – and now wants to do battle for constituents across the 50th Congressional District.  In an exclusive interview with East County Magazine aired on KNSJ, she shared her vision for reforming healthcare, strengthening services for veterans and military families, and protecting a clean, healthy environment.

“A patient advocate is really your warrior for you when you are ill, and this is something that our representative should be doing for all of us regardless of our political party,” says Chadwick, a Democrat.  “The Constitution begins with `We, the people.’”

Chadwick supports Medicare for all as the best solution to healthcare, but realizes that’s not likely to get through the current Congress. Still she hopes it will someday pass. “We are the greatest nation. Don’t you think we should have the greatest care?  Yes, we should be providing that for all of our citizens.”  She notes that the V.A. is a  single-payer system, as is Medicare.

She strongly opposes repealing the Affordable Care Act (Obamacare) but also acknowledges that Obamacare isn’t perfect—and needs to be fixed.

“Representatives from both parties  actually have to acknowledge that there is a problem and they have to come to grips with figuring out how to find the solution…I can tell you that on our nonpartisan board [at the healthcare district], it’s Democrats and Republicans working together on a regular routine basis, and we come up with solutions that are in the best interest of the people that live in our districts and the patients,” she says.

Obamacare has done some “fabulous things” beyond getting healthcare for many who were uninsured, she notes.   Doctors are finding patients coming in now  are in better condition due to preventative care and maternity care that Obamcare provided – things the GOP wants to take away.  That has a big impact on hospitals, she notes.  Also, hospitals under Obamacare are required to report their outcomes –so hospitals with high infection rates or other probems are incentivized to fix them, improving the quality of care for patients.

“I would like to see us find the solution to bring down costs for our middle class people…that’s most of us,” she says.  “There has to be a solution. To just let it die and implode” as Trump has said he will do,  would make prices skyrocket and “is not going to help any of us,” the patient advocate says.  Eliminating Obamacare would also mean loss of 2.6 million jobs nationally, including many locally, she notes.

She also wants to see the federal government negotiate to buy prescription drugs in bulk, or from Canada, to bring down medication prices.

She voices concerns that Republicans are seeking to privatize the V.A.; Hunter has been an advocate of privatization of many government services.  “The bottom line in privatization is profits,” she warns. “That’s what you see with some private hospitals…they start cutting out services that are not profitable.” The V.A. should be kept public, investing in patient care and equipment, she adds.

Chadwick describes herself as “very pro-military” because she was raised in a military family with two Navy parents, and she has worked  with veterans at the V.A.  She faults Hunter for taking money from defense contractors and voting for items they manufacturer even when the Pentagon’s military leaders said they didn’t want it. The result is that not the best equipment gets purchased, but rather those made by companies that have “the best lobbyists,” she observes.

Noting that President Donald Trump wants to boost military spending,  Chadwick says that will probably go to buy more ships and planes. But she says, “You know who really needs that money? Our ground troops. They need to have the best equipment.”  She wants to use technology to keep ground troops safer, and also increase funding “for our families that are in the military--their children, their housing, their education.”

She believes Congress should take seriously its responsibility to declare war, something Congress has not done since World War II, while presidents have sent troops into harm’s way without Congress fully investigating and reviewing all of the facts.   She also believes our nation should keep all of its promises made to military personnel and veterans.

She also wants better care for all veterans when they come home, to reduce suicides and help those with disabilities.  Hunter has “a mixed voting record” on supporting military families, she says, adding that more should be done to help homeless vets and those coming home with mental health issues such as PTSD.  She participated in the Stand Down for homeless veterans in San Diego.

Chadwick supports the 2nd Amendment right to bear arms and as a wildlife artist/environmental advocate, has seen how hunting groups support conservation of habitat.

“It’s about sensible gun laws,” she says.  She criticized Hunter for supporting a bill just passed by Congress and signed by Trump that allows hunters to gun down bears and cubs hibernating in their dens, as well as driving wolves out of their dens and  slaughtering them by helicopter.

A former psychiatric nurse, she think Congress passing a bill to let severely mentally ill people buy guns was  “nutty.”  As a psychiatrist nurse,  she recalls when police brought in mentally ill patients who were hearing voices, the first questions asked where whether they had a gun and access to it.

Also an internationally accliamed wildlife artist, Chadwick has been a speaker on enviornmental protection issues. She criticized Hunter for having ratings of zero or near zero from enviornmental groups for his voting record through the years that's "as bad as it gets," in Chadwick's view.  As a nurse, she recalls how polluted our air and water were before President Richard Nixon established the Enviornmental Protection Agency, which Hunter just voted to repeal--not reform, but completely eliminate.

Involved in research into lung diseases before the EPA,  Chadwick recalls that the air in much of East County including Hunter's hometown of Alpine was smoggy, with alerts to warn people with asthma or other breathing conditions when not to go outdoors--something the younger generation doesn't recall.  "You can see the difference in the air quality," says Chadwick, who is appalled that the Trump administration is pandering to corporations that want to roll back clean and air water protections, as well as rules that help protect against exposure to toxic substances such as asbestos.

Chadwick attended the  Trump inauguration in Washington D.C., though she’d hoped to see the first woman president, Hillary Clinton, taking the oath of office.  She also attended the women’s march and was impressed by the huge size of the crowd and the positive attitude in the march, compared to the somber mood at the inauguration.

She returned to San Diego and read in the newspaper that Rep. Hunter is accused of spending $60,000 in campaign money including taxpayer matching funds on personal use,  she made up her mind to run. Hunter, who insists he didn’t break the law, is under a criminal investigation by the Justice Department.  Charges to his campaign later deemed personal include a lavish family vacation to Italy, expensive jewelry, payments to his children’s school, and flying his son’s pet rabbit first class on a flight.

“I told him that because of his corrupt behavior, he did not deserve to represent us,”  Chadwick said of her  announcement at Hunter’s town hall.  As an elected official herself, she says, “We understand what campaign money is. That’s precious money that our constituents have given us to do god works for them.”

Asked what makes her believe she is strong enough to beat out a pack of a dozen or so candidates in a primary,  defeat Hunter in a general election, and stand up against special interests in Washington if she wins,  Chadwick replies, “I’ve been elected five times for this seat that I hold, every four years,” in a healthcare district that largely overlaps Hunter’s. “And I am by occupation a patient advocate, and a patient advocate as a nurse  stands up and fights for their paitent. It’s the nurse warrior in me.”

She adds, “I don’t care what the administration says, or a doctor; if my patient needs care, my patient gets care.”  Constituents in the 50th Congressional district “need to be represented by somebody who will stand up for their rights and listen to all of them, whether they are Republicans, Independents or Democrats,” she concludes.  As a representative, “You have to represent everyone—and you have to be brave enough to stand up for the rights of all the people that you represent…I’m the nurse warrior that can do that.”

To learn more about Gloria Chadwick and her candidacy, you can visit www.GloriaChadwickforCongress.com.

Honestly DesertTrek, I just would like to know your sources! I thought if you would share them it would help us all understand where you get your opinions and insights! Perhaps giving your sources would help others to understand your rationale, which often is mostly attacks. Help me and more folks understand and appreciate your position and connect the dots, which I'm interested in!

no need to attack DS Risby .... I thought that was against the rules here?

personal attacks , seems fine when one person of philosophy does it but not another.

Because you called Gene abusive.  Like have you actually ever met the guy?  I didn't know abusers gave such great hugs.