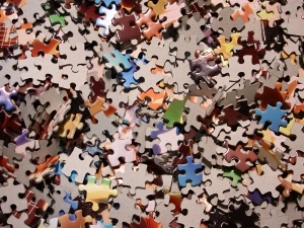 Originally published in The Moderate Voice, a member of the San Diego Online News Association

June 1, 2017 (Washington D.C.) -- If you think of the Russia scandal as a big jigsaw puzzle with lots of seemingly unconnected pieces when they are first spread out before you, several things become apparent as the pieces begin to fit together.

The easy pieces are the corners and edges of the puzzle, which scandal investigators and certain reporters figured out some time ago as they painstakingly connected them. But it has only been recently that the heart of the puzzle — those funny shaped pieces in the middle from which a comprehensive picture of the scandal is emerging — have begun to be connected.

And behold, that is a picture of mutual backscratching on a mindbogglingly grand scale: Team Putin made Team Trump an offer it couldn’t refuse. You help us and we’ll help elect your man by sabotaging Hillary Clinton, which will be a piece of cake for us with you in the game.

Oh, and when our little scheme works out, President Trump can relax those nasty Russia sanctions and our banks can offer some great financing for your Yankee capitalist business ventures.

Those middle pieces are falling into place because of recent disclosures, in most cases leaks by intel sources furious over Trump’s flirtation with treason. These disclosures reveal that about the time Trump campaign associates — starting with Jared Kushner and Michael Flynn — began meeting with Russians of interest, as investigators call them, the Kremlin’s plan to throw the 2016 presidential election got off the ground, and that was not a coincidence.

The way those middle pieces interconnect also is anything but coincidental, and the cause-and-effect relationship between what Team Trump was doing and Team Putin was doing is impossible to ignore even if it is not yet particularly clear. But of one thing we can be sure: This relationship was not merely an astonishing series of events that have innocent explanations.

Kushner, who is attracting a lot of attention these days as an American of interest as those middle pieces are connected, is a case in point.

He is not merely Trump’s son-in-law. He wields enormous if ill-defined power as the president’s closest adviser and takes the scandal to a new height because of his proximity to him. When you understand that Kushner and his father-in-law have benefitted enormously from a culture where deal making, deceit and lying are as familiar to them as breathing, Kushner’s serial prevarications — no, let’s just call them lies — regarding his contacts with Russians of interest are telling.

There were at least five contacts between Kushner and those Russians of interest, including three face-to-face meetings, that reflect a staggering naiveté — or perhaps stupidity blinded by greed — since it is widely known that the FBI monitors the communications of Russian officials in the U.S. and the NSA monitors the communications of Russian officials abroad.

The first meeting was in April 2016 as Trump was pulling away from a crowded Republican primary field. That was when Kushner and campaign adviser Flynn met at the Mayflower Hotel in Washington, D.C. with Sergey Kislyak, Russia’s ambassador to the U.S. and a man widely considered to be a spy in diplomat’s clothing.

Little is known about that meeting except for one hugely important thing: About the same time as the meeting — speaking of non-coincidences — U.S. intelligence intercepted the first communications among Russian in which they had shifted into higher gear and were now aggressively discussing putting their election meddling plan into action, and they indicated the centerpiece of that plan was sabotaging Clinton.

Kislyak was to meet with several Trump associates, including twice with future Attorney General Jeff Sessions, in the intervening months prior to the second meeting between he and Kushner, again with Flynn present, on December 1 or 2 at Trump Tower in Manhattan.

That was about three weeks after Trump’s election victory and shortly before the Obama administration imposed tougher sanctions on Russia because it had solid evidence that the Kremlin had interfered in the election.

There were two topics of discussion at the second meeting: Easing sanctions when Trump took office and, apparently at the suggestion of Kushner, having Kislyak set up a secret communications channel between the Trump transition team and the Kremlin using Russian diplomatic facilities to shield their discussions from monitoring. It would be a slam-dunk case of espionage if an American intelligence officer had done anything like that.

And then there was this: Any number of foreign dignitaries were being paraded before the news media as they arrived at Trump Tower to pay their respects to the president-elect during the transition, but Kislyak was snuck in a back door and the meeting remained a secret.

In mid-December 2016, Kushner met with close Vladimir Putin associate Sergey N. Gorkov, the chief executive of Vnesheconombak and trained spy with no diplomatic role, at its New York offices.

The development bank, in street parlance, is mobbed up. It has close ties to the Russian intelligence services, has been used to insert spies into the U.S. and was sanctioned by the Obama administration in 2014 prior to the arrest of Evgeny Buryakov, a spy working undercover as a bank executive who had met with onetime Trump campaign foreign policy adviser Carter Page in 2013 in an effort to have him engage in clandestine intelligence activities for Moscow.

Buryakov was prosecuted for espionage in 2015 and did prison time, while Page was the subject of a FISA Court warrant, a distinction typically reserved for suspected terrorists. The bank remains under sanction.

Kushner’s legendary attention to detail failed him repeatedly in January of this year when it came time to fill out a background form so he could be granted a high-level security clearance that would give him access to the nation’s most closely guarded secrets. He somehow completely forgot about his meetings with Kislyak and Gorkov, as well as business contacts with dozens of other foreign officials. And then forgot that Flynn had accompanied him to the Kislyak meetings after eventually acknowledging they had occurred.

(This amnesia was contagious. Jeff Sessions forgot about his own meetings with Kislyak when it came time for him to fill out the background form.)

We have learned a great deal about Trump, Kushner and their associates as the Russia scandal has grown from a lot of smoke to a nasty fire and on to a general-alarm conflagration. All of it is bad and all of it is about money: Ruthless profiteering, shadow corporations, phantom tax returns, emoluments, money laundering, deal making with authoritarians. And Flynn. There is almost always the presence of Michael Flynn.

Perhaps the biggest lesson of the scandal is that Team Trump knew that a crazy billionaire celebrity TV star could not win fair and square. But because of their culture of deal making, deceit and lying, they would not hesitate to help undermine the bedrock of American democracy for political and monetary gain, and that made them ideal co-conspirators for Team Putin.

CLICK HERE FOR A COMPREHENSIVE TIMELINE OF THE RUSSIA SCANDAL.

..the flying saucer hid in the hanger at Area 51. Hillary is a looser. Get over it.