June 6, 2017 (Lemon Grove) – Here’s some sweet news for Lemon Grove residents and baked goods aficionados:  the Lemon Grove Bakery will be opening on Friday, June 9th from 6 a.m. to 6 p.m. in the site of the former Grove Pastry Shop at 3308 Main Street, Lemon Grove.

The new shop is run by Burton Foods, owned by four ex- and active duty Marines.  In addition to the “soft” opening this Friday, there will be a grand opening celebration with full festivities in July.

Grove Pastry Shop was a fixture in town from 1955 until last year, when the landlord sought higher rent before ultimately selling the building.  Grove Pastry was famed for its wedding cakes and other delicious goodies.

The building, a Mission Revival-style architecture, was built in 1912 by Dr. Charles Good, a San Diego dentist and orchard grower. It was built on the site of the town’s original general store, which was built in 1891 and burned down in 1906 because it was filled with bales of hay, oil for lanterns, and shotgun shells. 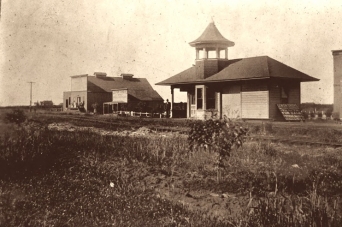 : 1895 photo of Main Street showing the Train Depot on the right, the original general store (built 1891; burned down 1906) in the center, and a lemon packing house on the left.

“There was no fire department,” says Helen Ofield, president of the Lemon Grove Historical Society.  A bucket brigade was unable to save the building. In 1907 the Sonka family came to town and built a simple wooden structure and leased it out. The retail shop became the “Walmart of its day,” says Ofield. Sonka General Merchandise sold in 1947. In 1980, Grove Pastry Shop moved into the building from its original location on Main Street and the rest, as they say, is history.

“Today, the building is the oldest, continuously operated commercial building in Lemon Grove and the one that kick-started the town's post agricultural economy,” says Ofield.

You can view the full story of the historic building at the Parsonage Museum, 3185 Olive, Civic Center Park, on Saturdays from 11 a.m. to 2 p.m.

When visiting the new Lemon Grove Bakery, in addition to sampling their baked good, be sure to check out the Lemon Grove historical murals on the outside wall of the building, as well as the many upgrades that the city has made downtown.

You can go ahead and start ordering cakes and yummies for your special occasion by sending an email to: lemongrovebakery@burtonfoods.com. 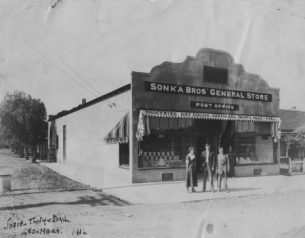 Another fine local color article from the East County Magazine!

I was a regular customer of the old bakery in Lemon Grove. I quickly got addicted to one of their tasty bear claws with my morning coffee. (Is that now spelled, "covfefe?") I look forward to the new edition.

Roger, I forgot about the awesome bear claws. My mouth is watering. My wife and I became friends with some of the staff.