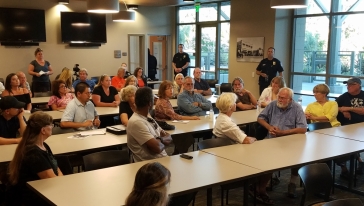 Hear audio of the meeting:

June 30, 2017 (El Cajon) -- Spurred on by a mentally ill homeless woman who made her street home in front of a shuttered El Cajon motel on East Main Street earlier this month and numerous homeless individuals settling in central El Cajon, some 50 El Cajon residents gathered in the Community Room at the El Cajon Police Department for a town hall meeting last Monday night hosted by El Cajon Mayor Bill Wells and Chief of Police Jeff Davis.

The problem has raised safety and sanitation concerns. Residents have complained in an online forum that mentally ill individuals have defecated on sidewalks, shouted and thrown chicken bones at passersby, leading neighbors to fear walking down the street. 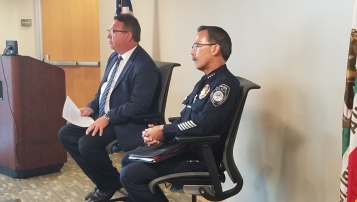 “Absolutely we hear you. Absolutely we’re pushing forward. It takes a little bit of time. I ask that you give a little patience. We know it’s bad,” Mayor Wells said. He added that the city council has just approved another 70,000 to be utilized by the East County Transitional Living Center Emergency Shelter Program. But El Cajon’s and San Diego County’s homeless problem runs deeper than what that alone can solve.

Chief Davis said that in recent years, law enforcement and social workers have seen that homeless people who utilize the sidewalks and streets as their homes are often much younger than in the past and are commonly users of methamphetamines.

“Generally what we see is an increase in theft. We don’t have solid figures and the data is anecdotal from our bicycle officers and our homeless outreach team,” Davis said. “But when you add to that mixture mental health issues and the drugs and more folks being released from the jails, it tends to create a perfect storm.” 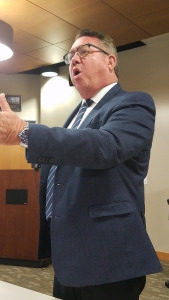 The residents present at the forum also expressed concerns that the streets in proximity of Farragut Circle in central El Cajon have way more homeless people doing aggressive panhandling than ever before.

For 60-year old El Cajon resident Anna Holmes, who lives near downtown El Cajon, the problem of homeless transients became personal when her recreational vehicle parked near Magnolia Street was recently burglarized and vandalized, though it’s uncertain whether the perpetrator was homeless or not.

“I walk to the downtown area and have been living here since 1989. My husband has been living here since 1978. The problem has gotten increasingly worse,” she attested. “Anywhere, everywhere. When I leave for work early in the morning, there are just so many along Magnolia, around Farragut Circle, around the route I take to go to the freeway. Then the worst thing for me, personally, was when my recreational vehicle was broken into and vandalized about a month ago,” she added. “I didn’t even think of reporting it to the police in that I have no idea when it happened and who did it. It wasn’t until I went to the meeting that the mayor stated that citizens ought to report these things. When we report these crimes they become a statistic so the police can map what’s going on,” Holmes continued.

The sheer number of homeless transients around downtown El Cajon is makes Holmes uncomfortable. “I’m just feeling really uncomfortable. All around the public library there are people with shopping carts. They’re just standing around the Lexington fire station. They’re just camping out there.” Holmes says that El Cajon city leaders need to take active action on the problem. “We have the opening of a five-star hotel coming up. It seems like we’re kicking ourselves in the butt if we don’t do something now.”

Holmes expressed the concern that citizens often don’t know what do when they see crimes being committed by homeless transients. “We don’t even know what to do when we see things happening. What I heard at the meeting was anger because our home values are being impacted and businesses around us are being impacted by the homeless. We need to feel that we are safe here.” 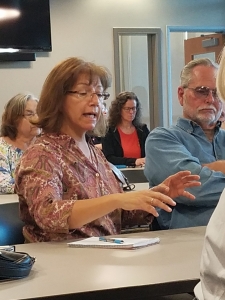 Wells and Davis cited evidence that due to San Diego County’s proximity to the border and the prevalence of the Mexican drug cartels, this is making the job of keeping things under control more difficult.

“Historically in El Cajon, there was a time that we had about 300 homeless people on the streets,” Wells said. “That is as bad as it was; we knew they tended to be a ‘classic’ homeless type person...older men who were alcoholics who would live on the streets.”

But he explained, “About 10 years ago, a group of El Cajon businessmen helped fund the East County Transitional Living Center (which was then known as “Set Free”) when they purchased a local motel and were successful in getting some 200 people off the streets. But then we had another hundred people – even though we offered them an opportunity to get off the streets – they would ask ‘Can we drink there?’ ‘No, we said, you have to stop drinking and we’ll get you a bed and a shower. Then they would ask, ‘Can I bring my pet dog? ’ ‘Can I bring my girlfriend?’ ‘Do I have to come in at night?’”

Wells added, “When they would be told that there would be rules associated with living at the center, they would simply say, ‘No thanks.’,” Wells told the intensely listening crowd. “Then they said, 'I like my lifestyle, I like things as they are,' and that was that.”

About 18 months ago, Wells said that El Cajon law enforcement and other cities and towns in San Diego County saw a major uptick in the number of homeless people. That is when the Mexican drug cartels pushed out the other drug dealers and started flooding the market with a high-quality crystal meth manufactured at labs in Mexico that Wells says were “pharmaceutical quality” at a higher 97 percent purity--and selling it at prices two-thirds less than the old methamphetamine was sold at.

“A lot more people who wanted to use drugs switched over to methamphetamines – mostly younger people – and these people became very addicted like never before,” the Mayor explained. “They don’t want food, they don’t want shelter. They want drugs. What we’re seeing is a different type of homeless person.”

Holmes credits Mayor Wells for acknowledging the problem when it was raised in a community discussion on the NextDoor.com website. “When he saw the discussion thread he reached out to us and promoted the idea of a town hall to discuss the problem,” she said. “One of the neighbors said how she was concerned about a mentally ill woman camped out in front of an abandoned motel making it difficult to go around her. Like others, I participated in the online chat and put the link to the mayor’s e-mail address on the city’s website. That’s when he came back to me and said, ‘Why don’t we have a meeting about it? Well, I put a date and time to it and it happened. It was pretty much easy to get people to come to the meeting.”

Besides his government leadership roles with the city of El Cajon and the San Diego Association of Governments (SANDAG), Wells is a doctor degreed mental health professional, working mostly with the severely mentally ill, in both clinical and administrative roles at local San Diego County emergency health facilities.

Mayor Wells also blamed California state officials for the growing homeless problem in El Cajon. He said that that California Assembly Bill 109, which was passed in 2011 by the California State Assembly, transferred responsibility for supervising certain kinds of felony offenders and state prison parolees from state prisons and state parole agents to county jails and probation officers around the state, which has intensified the problem.

To allay the citizen concerns presented at the town hall forum, Wells said that in the coming months, in tandem with the East County Homeless Task Force (which recently presented a wide encompassing plan), the El Cajon City Council aims to implement several of the recommendations recently made by the group. But he also reminded the residents that it is sometimes difficult to balance the rights of homeless vs. citizen rights.

The increase in homeless encampments in downtown El Cajon is alarming to Holmes. “What gets me is that there an increase of homelessness and you don’t feel safe. If you are walking around by yourself, you go to places like the public library, and it is just doesn’t feel safe.”

While he admitted that actual El Cajon Police enforcement units are not able to service all calls that come in to its central dispatch center, Chief Davis encouraged local residents to call and report instances of disturbances caused by homeless encampments within the city at 619-579-3311 or 9-1-1. He also urged residents to use the city’s website at https://www.cityofelcajon.us/your-government/departments/police/help-us-help-you/online-crime-reporting to report such situations.

“Our policing efforts are data driven,” said Davis. “The more calls we get from residents gives us the data that we need for our crime analyst to generate our ‘heat maps.’ That is how we can direct our law enforcement efforts.”

Wells said that a follow-up community forum will be held in late July and will continue thereafter. His office will notify the time and date of the next meeting via e-mail.

Concerned citizens may call the mayor’s office at 619-441-1788 or send a meeting announcement request via the mayor’s e-mail web page at http://www.cityofelcajon.us/i-want-to/contact-the-city/contact-city-mayor-bill-wells.

Next week:  Watch for an upcoming story on El Cajon’s City Council taking action on homelessness.

It's far more than the other East County cities have done.

But . . . . . It's not important to the mayor or he would be doing something about it. That is the truth. When you want to get something done you do it right, you don't come up excuses, you fix the problem. With as long as this has been a problem if he was working on it everyday like a job, this would be fixed. He has all this great knowledge a PHD then use it, but alas that would take money. . . . . but if the city helps the homeless, the city can't pay for all those thousands of dollar raises they just gave out to employees that make well over $100,000.00 a year. Some employees are making $20,000.00 a month, THIS IS WHY WE STILL HAVE TROUBLE EVEN STARTING TO FIX THIS PROBLEM, BILL WELLS AND HIS FOLLOWERS ARE JUST TO GREEDY TO STOP. TO HELL WITH THE POOR RIGHT MAYOR?