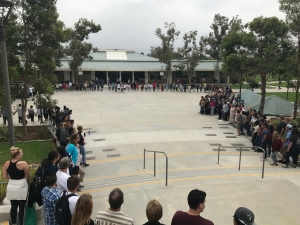 Originally published in the Grossmont Griffin

August 27, 2017 (El Cajon) -- It was fitting that dark, gloomy and ominous clouds hovered over Grossmont College’s campus on Thursday, Aug. 24. In response to the recent heinous acts and demonstrations committed in Charlottesville, VA, Grossmont College’s President Dr. Nabil Abu-Ghazaleh felt compelled to lead an impromptu vigil in the quad out in front of the Learning Tech Resource Center. He held a moment of silence to console any Griffin hearts that may be distraught after watching white supremacists and people affiliated with Neo-Nazism marching with guns and torches, chanting racist slogans in the streets of Charlottesville, where a woman was killed and 19 injured after a Nazi-sympathizer rammed a vehicle into a crowd of counter-protesters.

On Aug. 21, President Abu-Ghazaleh sent an e-mail to the students and faculty of Grossmont College concerning, as the e-mail reads, the “acts of hatred and violence in Charlottesville, Virginia, and the vacillating response of our nation’s president to ferocious fear mongering from within our country.” To express our college’s reaction to these incidents, Dr. Abu-Ghazaleh invited everyone in association with Grossmont to join him in making a “visual declaration of concern and a silent moment of solidarity” three days later in the Main Quad on Aug. 24 at 1:30 pm. The ceremony was purposely planned so that there would be no speakers.

There has been criticism from many that Trump’s comments blamed both sides equally and that he should’ve denounced the actions from white supremacists and Neo-Nazis more so than the counter-protesters. But in response to criticism from news networks, Trump tweeted (because who actually just speaks anymore) that the reports were “fake news” and that the media was never satisfied.

It is a rare occurrence for President Abu-Ghazaleh to address the school spur of the moment, but he felt that “wickedness should not be ignored regardless of its source, or worse, endorsed.”

For there being only a three-day notice prior to the event, there was a substantial crowd of 200 to 300 people comprised of students, student-athletes, professors and faculty. Certain professors, which include Joseph Braunwarth of the Political Science Department, let their students out of class early so they had the opportunity to partake in the congregation.

As the time grew closer to 1:30 pm and President Abu-Ghazaleh made his appearance, participants separated from a cluster to form a circle and then started reaching for hands, locking arms to express their unity and solidarity against the riots and quotes from our 45th President, Donald Trump. It was truly a moving scene to see a crowd of such diverse backgrounds, beliefs and cultures, not caring whose hand they had grabbed and gather in a fight against atrocities while doing so in such a peaceful manner.

A moment of silence passed to reflect on the loss of life, injured victims in Charlottesville and the distraught minds of those facing racial persecution across the globe. Cheers, clapping and hugging commenced as the silence ended. The whole Grossmont College women’s basketball team was present at the event and erupted into a chant of “G-HOUSE!… G-HOUSE!” in which students joined in to show that Grossmont College is not a place that is accepting of such activities occurring in the Old Dominion State.

President Abu-Ghzaleh stayed after the event to field questions from any student who desired to ask.

When I asked President Abu-Ghazaleh what prompted him to hold this ceremony he had this to say: “Today’s message was that even through our silence, because there were no speeches or formal statements, we were raising our voices collectively to object to radicalization and the hatred and fear mongering being utilized that we are seeing around the country.”  He added, “At a place of higher education, a college, it is our place to encourage all voices to speak, debate, dialogue,” as well express indifference.  All such speech should be welcomed and protected, he continued. “We defend the ability of (students) to say who they are and what they believe without fear and oppression.”

In response to the actions in Charlottesville, President Abu-Ghazaleh believes that the white supremacists and Neo-Nazi protesters are making an effort to “develop a fear of speaking and develop a pattern of silencing through violence of voices and preference of one voice over another.” He emphasized the belief that students disagreeing on opinions is a fantastic thing and that he encourages it as long as “they are doing it without threatening or scaring or disrupting. I would love to see debates with people who disagree with one another vehemently, but do it respectfully and do it with reason, supporting it with fact and without fear of repercussion.”

Seeing the immense amount of students get together for one purpose-- to support each other-- displays the courage of Grossmont and why the students here are some of the most endearing one could ever come across, he indicated.

There were no counter-protesters present at the Grossmont College event.

“We saw about several hundred people get together at a randomly selected time… I think that sends the message that nobody is alone and that there are people at any random moment who will accept an invitation at any random time to express their concern and support for their fellow human beings,” President Abu-Ghazaleh concluded.  “It emphasizes Grossmont College and the Grossmont-Cuyamaca College District and all the traditions of higher education to support our student and communities.”

call out classes over this news? Washington Post: Black-clad antifa members attack peaceful right-wing demonstrators in Berkeley. . . A pepper-spray-wielding Trump supporter was smacked to the ground with homemade shields. Another was attacked by five black-clad antifa members, each windmilling kicks and punches into a man desperately trying to protect himself. A conservative group leader retreated for safety behind a line of riot police as marchers chucked water bottles, shot off pepper spray and screamed, “Fascist go home!” here.
I would be absolutely distraught to learn that the college president was terminating instruction and forcing students to attend a political demonstration. Abu-Ghazaleh is paid to manage a college, and not to force students "to express their concern and support for their fellow human beings" in lieu of getting an education.
He did not "force" students to attend, although some sympathetic instructors may have ended classes early so as to "strongly encourage" their students to show up. He was actually quite shrewd in making it a silent protest - that way he can make it look like he really cares, without having to deal with the fact that the freedom of expression he espouses might end up hurting someone's feelings. The resulting "statement" though was an empty one; it sounds like the women's volleyball team did more for campus unity.

You were one of the weird kids that sat in their seat 20 minutes after class ended and after everyone had left with a creepy, overly eager smile on your face and who actually wanted homework, right?

"JEWS WILL NOT REPLACE US" chanted by KKK, White Supremacist's and Nazi's and given the Nazi's well documented history and past practices only qualifies as Minor Violence? I'd compare them more to Radical Extremists! We know these groups have ties with Domestic Terrorists. Nazi's exterminated and killed how many million, including our U.S. Soldiers..... and even the Handicapped were on their list. We entered WWII fighting this evil! They were and still are a pestilence to society and they have clearly shown us this by their acts of hatred, murder, and willingness to enslave people that weren't them in the 30's and 40's. Has anyone heard or seen any indication that they have changed their positions or vision since then? What was it that compelled James Fields to drive into that crowd and take a life from someone? When Mr Fields committed murder in association with and on behalf of this group it all became very personal. It was an action that changed the complexion of everything going on and a stark reminder to us of what these groups stood for in the past and here they are, once again, publicaly showing us their solution to what they see as our problems. The White Supremacists , KKK, and Nazis are the ones that resorted to the Death Penalty that day, not Antifa. Bravo Dr. Abu-Ghazaleh

in blaming one side for the minor violence (about fifteen injured not counting the vehicle assault) in Charlottesville. Both sides carried bats and other offensive implements, and as he has said, both sides have the right to demonstrate and speak. So in this concocted small demonstration at Grossmont (classes let out, teams attending, etc.) Grossmont's president is in fact trying to eliminate free speech and instigate racism. More information here.

>"Grossmont's president is in fact trying to eliminate free speech and instigate racism."