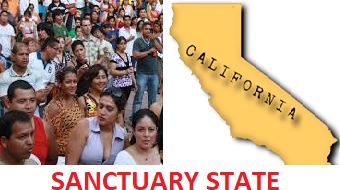 But the action has drawn a statement in response from Tom Homan, acting director of Immigration and Customs Enforcement (ICE), threatening to “conduct at-large arrest in local neighborhoods and at worksites, which will inevitably result in additional collateral arrest, instead of focusing on arrests at jails and prisons,” adding that ICE will now have to detain people outside of California, making families travel farther.

The bill prohibits local governments from requiring undocumented immigrants to spend extra time in jail so that immigration agents can pick them up and deport them.  It also bans police or other law enforcement officer from asking about immigration status of people during routine interactions, such as speaking with victims or crimes or witnesses, or during traffic stops.

The Governor notes, “It also bans unconstitutional detainer requests and prohibits the commandeering of local officials to do the work of immigration agents.” It instructions the state’s Attorney General to create model policies for health, education, labor and judiciary officials at state and local levels to follow on immigration matters.

Brown adds, “It is important to note what the bill does not do. This bill does not prevent or prohibit Immigration and Customs Enforcement of the Department of Homeland Security from doing their work in any way. They are free to use their own considerably resources to enforce federal immigration law in California. Moreover, the bill does not prohibit sheriffs from granting immigration authorities access to California jails to conduct routine interviews, nor does it prevent cooperation in deportation proceedings for anyone in state prison or for those in local jails for any of the hundreds of serious offenses listed in the TRUST act.”

But ICE’s Homan insists that Brown’s decision to sign SB 54 “will undermine public safety and hinder ICE from performing its federally mandated mission.”

Contrary to earlier promises, some recent ICE arrests and detentions focused not on criminals, but people whose only transgression was entering the U.S. without documentation decades ago in some cases.  Such arrests have split apart families, separating parents from young children born in the U.S., deporting even parents of disabled and hospitalized children.

An FBI report on crime proves that border cities with high immigrant populations actually have lower crime rates than non-border cities, however, as ECM and Times of San Diego recently reported.  Fear of deportation can lead to some immigrants not coming forward if they witness crimes, or are victims of crimes.

The Sanctuary States bill was supported by immigrant and human rights groups, but opposed by the California Sheriffs Association.  The California Police Chiefs Association, however, shifted its stance to neutral after amendments were added to alleviate the group’s initial concerns.

Nationally, even a poll by conservative Fox News found that 83 percent support a pathway to citizens for undocumented immigrants who are working and 86% would support a citizenship pathway for who were brought to the U.S. as children.

California is the first state to adopt sanctuary state status, though several major cities in multiple states have done so.

..is an idiot! Our infrastructure has gone to Hell and he is spending time and our dollars protecting illegal border crosers. The bill should read ... aimed at protecting ILLEGAL immigrants in California..