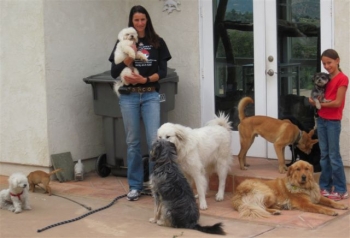 December 10, 2010 (Blossom Valley)--Puppies are popular gift choices this time of year. But, it’s all too common for pets to become discarded holiday presents left at shelters as Christmas morning becomes a distant memory, according to dog rescue groups.

Cate Sacks, in the Blossom Valley area of El Cajon, works hard to turn around the fortunes of those puppies and hundreds of other shelter dogs. Through her dog-adoption program, “Shelter Dogs to Dream Dogs,” Sacks places animals with qualified adoptive owners -- but only after both dog and person receive a dose of intense attention and training.

At any given time, Sacks typically has a handful or more of former shelter dogs in training at her home and largely relies on her contacts, word-of-mouth and her website to find just the right adoptive owners. She estimates that since starting work with shelter dogs four years ago, working exclusively since 2008 with the Chula Vista Animal Care Facility, more than 500 of the down-trodden have passed through her doors.

Sacks is an animal behavioral specialist and former Montessori school teacher. The 43-year-old mother of two says her combined education and experience are perfect for dealing with shelter dogs. Helping her look after the dogs is her 9-year-old daughter, Makena.

“You basically realize that you train dogs and kids the same,” she said. “Most of my training has come from working with shelter dogs.” Sacks said many of the dogs come to her “unwanted, untrained and absolutely out of control.” She added, “I’m taking the ones from the shelter that can’t be adopted.”

But, it’s not long – typically a matter of weeks – before the transformation takes hold and dogs that were previously not wanted become the right pet for the right family, she said.

“I have some dogs that have had a very hard life and I have to spend more time with them. So it’s just a matter of how long it takes for the dog to become comfortable. I just go at the pace of each dog,” she said. An extreme case, involving a severely abused dog, required six months of care and training.

Working with Sacks, is Linda Septon, the adoption and rescue coordinator for Chula Vista’s shelter. Sacks calls Septon an “angel.” Septon said she sometimes will ask Sacks to take a specific dog while at other times Sacks chooses on her own.

Septon said, “Certain dogs we know that need Cate’s training program or we feel will thrive in her dog therapy training program are pointed out to her when she comes to the shelter.” Dogs with “behavioral issues (and) not available to the public,” are an example of those for Sacks, Septon said.

Once Sacks determines that a dog has progressed well enough to move on to a permanent home, she then works carefully to match the animal with the right person. Another aspect of the process involves training that adoptive owner. “I have to educate the people. You have to teach the humans how to understand and listen to the dog,” she said.

“Every animal is different, but I require that people have enough time (to be with the adopted dog). I need to ask enough questions to make sure they won’t be backyard dogs,” Sacks said. “Backyard dogs” is how she refers to those animals that end up alone and unattended all day. Sacks estimates that 75 percent of the adopted dogs leaving her tutelage are either “companion” or “therapy” dogs.

She said the difference between a companion dog and a therapy dog is that a therapy dog goes through training that ends with passing a standardized test. “If your dog is your best friend and you work from home and the dog goes with you wherever you go, then that’s a companion dog,” Sacks said. “The other 25 percent are typical family dogs,” she said. 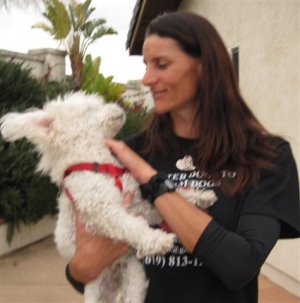 It takes a certain character of dog for it to be adopted as a family dog, Sacks said. “I, sometimes, have dogs that don’t really care” if they receive limited amounts of attention from their owners. One example of just such a dog is a small white poodle-mix she calls “Sid.” She points out, “Sid has been sleeping all day on this bed. So, if there’s someone that works eight hours a day (and isn’t home) that would be fine. It wouldn’t make a difference to Sid.” She added, “I really work individually with each dog and I talk to the new owners” to see if it’s the right fit.

One of the things she covers with prospective owners is a single-page adoption contract. Sacks requires that it be reviewed and completed as another part of the process. She said she spends about 15 minutes discussing with the adoptive owner each item on the agreement. That adds up to hours of discussion.

The first and second lines of the contract make clear her expectation of that new owner.

They read, “I understand that adopting an animal is like adopting a child. I promise to love and care for this animal as I would for a human child.”

The adoption agreement, coupled with a non-refundable fee that can be $350 or more, helps Sacks identify committed, prospective owners. The fee also helps cover the shelter fee and costs she incurs for dog food, training and other expenses.

“I have people come here and think they’re making a purchase. They think they are shopping. But it should be (viewed) the same as if you’re adopting a child.” Sacks added, “A lot of people don’t want the adoption fee or they don’t want the responsibility and they go away.

Prior to Sacks taking the dogs from the shelter, all are spayed or neutered and micro-chipped, Septon said. Because microchips include owner information, once Sacks selects an adoptive owner for a “dream dog,” that person’s information is then registered with that dog’s microchip, as part of the requirements of Sacks’ adoption contract.

In addition to Sid, the white poodle mix, other dogs currently available for adoption include a handful of five-week old puppies and their Dachshund/Spaniel mother. For more information, visit www.shelterdogstodreamdogs.com, or e-mail Sacks at k9andk8@gmail.com.

As for giving a pet as a present, for Christmas or any other time of the year, Septon suggests caution as there’s a reason her shelter never experiences a slow time of year. “Before families bring in a furry member of the family, they need to evaluate their home and lifestyle to see if they can give that new pet a lifetime commitment.”

This woman is dishonest. Please google her name and stay away from her.