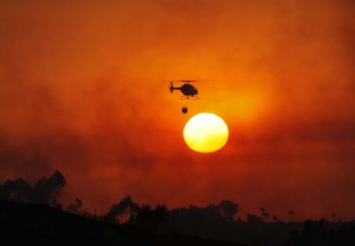 “We will vigorously pursue all available avenues to overturn this decision.“ -- Lee Schavrien, SDG&E senior vice president and regulatory officer

November 30, 2017 (San Diego) – Ten years after the 2007 firestorms, the California Public Utilities Commission (CPUC) ruled today that San Diego Gas & Electric (SDG&E) cannot charge ratepayers $379 million for the utility’s uninsured losses due to damages in the 2007 firestorms.  By a unanimous decision, the CPUC ruled that SDG&E did not reasonably manage and operate its equipment, which Cal Fire found caused or contributed to the Witch, Guejito and Rice fires.

Christine Ross, DVM, who lost her home, business and intellectual property in the Wtich-Guejito complex fires, greeted the news with joy. “Fabulous! That is such good news,” she said, also thanking East County Magazine for reporting on the controversy through the years. Ross, one of the few fire survivors who has not settled her case against SDG&E, says it remains in the court system on appeal.

"After years fighting of fighting this application to charge ratepayers for the 2007 uninsured fire costs of SDG&E, we are gratified that the Commission voted today to reject the idea in a 5-0 decision.  We applaud the commissioners for their good judgment."  Diane Conklin, spokesperson, Mussey Grade Road Alliance in Ramona, a nonprofit group that has intervened at the CPUC on powerline fire issues, told East County Magazine.

Today’s CPUC decision upholds the recommendation of two administrative law judges.  It comes after multiple delays and revelations that utility company executives from SDG&E, PG&E and Southern California Edison held ex-parte meetings with commission staff in an effort to lobby the commission to rule on behalf of utilities.

The decision, if it stands, sets a precedent that could be used to hold PG&E responsible for the deadly firestorms that ravaged northern California recently.

SDG&E has denied that its equipment caused the fires, faulting excessive winds for the Witch Fire, a fallen branch for the Guejito Fire and a Cox Cable line that came in contact with a power line for the Rice Fire.  But SDG&E has paid out over $2 billion in settlements and other costs related to the fires.

Schavrien contends, “The CPUC got it wrong. The 2007 wildfires were a natural disaster fueled by extreme conditions including the worst Santa Ana wind event this region has ever seen, combined with high heat, low humidity and hurricane-force winds as high as 92 mph. Experts from Cal Fire and the County Office of Emergency Services described the weather as ‘unprecedented [in] magnitude,’ and ‘wind conditions being the worst they had ever seen in recent memory.’”

He says the decision is not supported by the evidence and is not consistent with a determination made by the Federal Energy Regulatory Commission that  SDG&E acted reasonably and approved the FERC-jurisdictional portion of the wildfire cost request.

In a separate action today, consumer attorneys Mike Aguirre and Maria Severson released a study that documents how the CPUC is controlled by three investor owned utilities that it is supposed to regulate: Sempra (SDG&E’s parent corporation), Pacific Gas & Electric (PG&E) and Edison International.

The study concludes, “The utilities have placed the CPUC into a severe and advanced case of regulatory capture. Radiation leaks, fatal explosions, deadly fires, and debilitating methane leaks have become common place for the People of California. Excuse-making, cover-up, delayed investigation, and secret disruption of reasoned ALJ decisions following hearings is the CPUC corporate culture under the Peevey-Picker era.”

The consumer attorneys’ study concludes that  the CPUC must make radical changes to restore its fundamental mission of protecting the safety of the people it is supposed to be serving, adding, “How many more lives can we lose?”

The regulators who are tasked with protecting the public instead protect the criminal behavior of the utilities. That's (not) comforting.