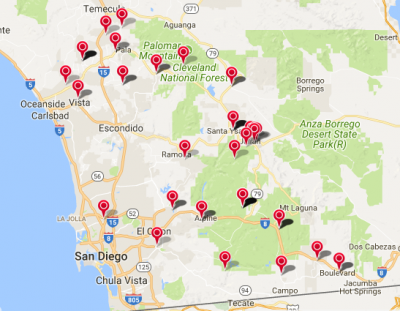 The widespread shut-offs comes just days after the California Public Utilities Commission ruled that SDG&E cannot charge ratepayers for its uninsured losses from damages in three of the 2007 wildfires that state regulators found were caused by SDG&E’s power lines.

Another complaint has been the lack of accessible shelters. Only two shelters for those with power outages have been opened – one in Escondido, the other in El Cajon.   In the mountain, high desert and rural communities, those shelters were an hour or even an hour and an half away – and completely inaccessible on Thursday, when Interstate 8 east of Alpine was shut down due to winds so strong that they flipped over a semi truck and a 30-foot trailer.

Nancy Bauler Satallante posted on Facebook, “"A rep from SDGE just called me & told me it could be days until power is restored.   I used the opportunity to let him know that this should've been handled differently….I also told him that they should bring a water truck out to help people w/ animals who are all electric...Also to set up a red cross emergency center out here so people can have a hot meal, etc. Having this many people w/ no power there needs to be more than ONE Red Cross shelter. Not everyone can get to El Cajon. The "need" is out here in the backcountry!! I hope that my suggestions will help!!"

Red Cross spokesperson Emily Cox told us Thursday, “I know it is a little far, but we coordinate with County Office of Emergency Services and SDG&E to determine the safest place for us to put the shelters and we needed to have locations far enough from the potentially affected area so that they would maintain the safety. The recommendation was made for locations within the city limits of El Cajon and Escondido to guarantee full service for the shelters and we will evaluate the need for additional locations throughout the next few days.”

Jan Hedlun, a Potrero resident and member of the Potrero Community Planning Group, says repairs on a pole in front of her home were delayed more than a year. She questions why maintenance was postponed until the current high wind conditions were eminent.

“ I believe strongly that SDG&E dropped a major ball with their method of shutting down electricity, telling folks it will be days before they turn it on, and doing nothing to help,” she states in an email to ECM. “Potrero has two circuits - one from the Campo area and one through Barrett. The Campo link went off this morning and the Barrett link was shut off around 1:00 PM. On the outage map earlier in the day the restoration time was set for Monday the 11th. Now it's Saturday the 9th at 4:00 PM. I love how they say:

"If your power is out, please be sure you have adequate emergency supplies on hand for an extended period of time and check here for the most current information on expected restoration times."  They certainly didn't give adequate warning for people to be prepared, especially those with livestock. And if cell service is out, power is out . . . how can anyone check the website? Really?”

Hedlun adds, “I believe that Ms. Satallante is correct that the company should have set up the area better. They knew this event was coming long before we did and could have made arrangements. It should be mandatory if they are going to deprive us of service.”

Supervisor Dianne Jacob, asked by ECM whether such extended shut-offs are warrented in her view, replied, “I’m concerned about any shutoffs because they can pose their own risks to property and life in a crisis, especially in rural areas where fire crews and residents need access to well water. I urge SDG&E to cut power only as a last resort and only if there's the danger of an actual system failure that could ignite a wildfire.”

ECM also contacted the offices of Assembly members Ben Hueso and Randy Voepel, who represent mountain and rural communities most severely impacted by the shut-offs, but thus far we have not received a response. California Public Utilities Commission spokesman Christopher  Chow confirmed that such shut-offs are authorized by the CPUC.

In an email to ECM, he wrote, “Decision 12-04-024, issued April 26, 2012 (http://docs.cpuc.ca.gov/PublishedDocs/WORD_PDF/FINAL_DECISION/165063.PDF gave SDG&E authority under Public Utilities Code sections ‎‎399.2(a) and 451 to shut off power in emergency situations when necessary to protect public safety, ‎including a situation where strong Santa Ana winds exceed the design basis for SDG&E’s overhead ‎power-line facilities and threaten to topple energized power lines onto tinder dry brush. ‎ Public Utilities Code Section 399.2 requires utilities to operate their distribution grid safely.  There is language in Decision 12-04-024 that references this code as providing authority for a utility to operate its system safely, which can include shut off in emergency conditions.”

He added that Southern California Edison has also proactively shut off power during high fire risk periods to prevent ignition.

SDG&E advises on its website, “If you power is out, please be sure you have adequate emergency supplies on hand for an extended period of time” and encourages residents to check this link for current outages and estimated restoration dates/times in your area:  https://www.sdge.com/safety/outages/outage-map .

SDG$E has had 14 years, since the 2003 fires, to harden their systems. Instead they buy new vehicles when the old ones are no where near end of service for a private company. They have no excuse at this point except greed. Also seems strange they started shutting down the back County AFTER they lost their PUC case. Too bad the press is too busy bashing Trump and has no time to look into SDG$E.

It is now practical to run a house and small farm off the grid including pumping groundwater using photovoltaic panels. This is especially true in areas not already served by a utility where the cost of bringing in a new powerline can be more than an new off the grid system. No down time during outages like now or payments to SDG&E.

I'm not affected but can imagine your grief. So Damn Greedy and Expensive rides again. Protect those who own shares in the company, screw the people who depend on reliable electric service.

The website now says Dec. 12 for Potrero, I understand the theory of ounce of prevention but seriously! Those of us in this area depend on electric for water from our wells not only for living but caring for our animals and if need be wetting things down to prevent abilityto easily burn! Furthermore I find it rather odd that this is the first time SDG&E has shut so many off for so long due to wind storm and it comes days after the CPUC they could not make customers pay for them to recover losses from fires of 2007. So they just screw us in another way.