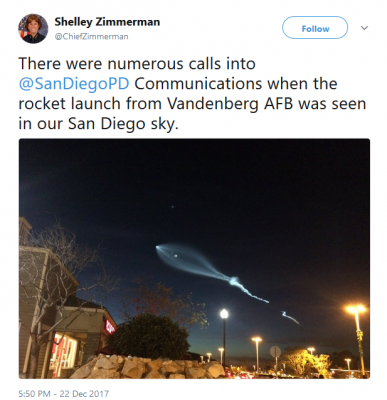 December 23, 2017 (San Diego) – If you were startled by brilliant, fast-moving lights in the sky last night over southern California, you’re not alone.  San Diego Police Chief Shelley Zimmerman reports that SDPD received many calls reporting the phenomenon, and tweeted the photo, left.

No, it wasn’t a UFO with space aliens, or a U.S. military aircraft. In fact, it was a successful launch of a SpaceX rocket from Vandenberg Air Force Base near Santa Barbara.

The Falcon 9 rocket lifted off at 5:27 p.m. and flew south, clearly visible across southern California and Mexico.  It carried a load of 10 satellites for the Iridium mobile communications network.

I try to see every launch and other celestial events. Oh, well. There will be something else to see soon.