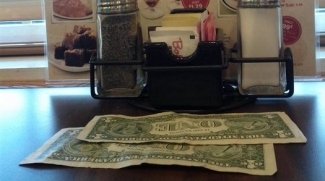 Photo:  Workers could be forced to turn over tips to their employers under a rule proposed by the Trump administration. (SRandCo/Morguefile)

January 18, 2018 (Sacramento) - As women's marches take place across the country this Saturday, time is running out to put in your two cents about a rule proposed by the Trump administration that a new report says could cost female workers $4.6 billion in tips a year.

The Department of Labor wants to rescind Obama-era rules that barred employers from seizing their workers' tips.

Researchers at the Economic Policy Institute found that the change could cost tipped workers overall $5.8 billion a year.

"Tipped workers are going to see a huge hit to their take home pay, and employers will be enriched because the vast majority of tipped workers are women,” she states. “Because women earn lower wages, they are far more disproportionately harmed by this rule."

The administration defends the change as a fairness issue, saying it will facilitate tip pooling, which would allow restaurants, for example, to take the wait staff's tips and spread them around to the dishwashers and cooks.

However, nothing in the rule stops employers from simply pocketing the tips, as long as everyone makes at least minimum wage.

Shierholz maintains the rule change would not end up helping non-tipped workers.

"They're already paying those workers what they need to get workers in those jobs, and so if they do share any tips with workers at the back of the house, it will very likely be offset with declines in their base pay," she points out.

Maybe we should read the existing rules before we get all excited about what may happen.
"Retention of Tips: A tip is the sole property of the tipped employee regardless of whether the employer takes a tip credit."
https://www.dol.gov/whd/regs/compliance/whdfs15.htm

is proposing to change?

Another Trump administration crazy idea...no surprise there. Many years ago in my youth, a food servers customer tips were divided among the staff - busboy & cook, so this is nothing new. Was it fair? I think so, after all, was a team effort in bringing satisfaction to the customer, not solely the waitress or waiter. But the "sharing" of tips was voluntary. It it still this way? I don't know. Should our government make it a mandatory law to share? Should a percentage go to the business owner? An emphatic NO! on both. How much micro managing do humans need from authority? Seriously, most of us do have the capacity to think rationally for ourselves.