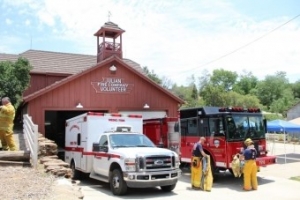 October 7, 2017 (Julian) -- I am a retired psychologist and not a journalist or investigative reporter. As a psychologist, my job was to listen. Maybe that is why so many individuals come and tell me “what’s going on.” I have become a repository of information about our fire department and I believe I need to share what I am hearing because it affects the lives of all of us living in the Julian-Cuyamaca fire district.

At first, I thought the proposal for the Fire Authority to take over JCFPD was being driven by Dianne Jacob, since she was the visionary for the formation of the Fire Authority and consolidation of back-country volunteer fire departments.  I have fought this proposal because I do not believe this small rural town could be managed better and more effectively from a bureaucratic organization that is 50 miles away (San Diego County Fire Authority), or by people who do not live in this community and value its history and culture.

But, after reading reports of how Cal Fire operated in the San Miguel Fire Protection District, and experiencing the flood of information into Julian from Patrick Walker, an officer of Cal Fire Local 2881, I think I may have been wrong. I am now concerned that the plan is for JCFPD to be managed by Cal Fire from Sacramento, 520 miles away. That is where Cal Fire and Local 2881 are headquartered.

Patrick Walker became a divisive actor on the Julian Facebook sites, to the point that locals saw nothing but his posts and arguments with local Facebook members. He appeared at a Fire Board meeting, placed a full-page ad in the Julian Journal, set up a fake Facebook page for “Julian-Cuyamaca Area Citizens in Support of CAL FIRE San Diego”, and mailed a postcard advertisement to every resident stating “Fire protection and safety services in the Julian-Cuyamaca area is at risk. Do you want to lose your paramedic engine?” I kept asking him, via Facebook, why he was so interested in Julian since he neither lives nor works here. It was perplexing.

Then I read how active he was when San Miguel Fire decided to cancel their contract with Cal Fire. His argument there was that 70 firefighters would lose their jobs. This did not turn out to be true because many of the firefighters who were previously San Miguel Fire employees were hired back and other Cal Fire staff were redeployed. But that argument was revealing as to the possible reason Walker has been so vigorous in promoting the County/Cal Fire proposal, to-wit:  revenue for Cal Fire from San Diego County, and the creation and protection of union jobs.

Julian seems like a small dot on the map, not a big deal for Cal Fire. But when you combine Descanso, Shelter Valley, Intermountain, Shadow Ridge, Palomar Mountain and Mount Laguna, a larger picture is observed. Also, Julian is a strategic location that provides roads in the direction of all these other fire stations. So, bringing Julian-Cuyamaca into the fold would be a boon to Cal Fire’s goal to ease the sharing and deploying of resources to these various areas. For this reason, people might think it reasonable to assume Cal Fire will staff our station adequately and put us at the top of the hierarchy for protection. This is not necessarily how it would work.

Cal Fire employees are moved around a lot, especially if they want promotions. That means no guarantee that permanent staff, familiar with the community, would be stationed in Julian. It also means that Cal Fire can deploy all of Julian’s resources to an ongoing wildfire (even the paramedic staffed engine), leaving Julian unprotected for structure fires and emergency medical services. This is what happened during the Cedar Fire. Our volunteers were assisting down the hill when our Fire Chief realized the fire was turning and heading back toward Julian. He did not need permission to return to Julian to protect as many homes as possible. Under Cal Fire’s authority, resources will be concentrated in the most populous areas or most active fire zone. JCFPD will always have this community as its first priority.

We live in a high-risk wildfire part of the county. We are very thankful for any and all firefighters that have helped during large fires in our district, especially Cal Fire. We have been very careful not to offend or step on the toes of those men and women to whom we are so grateful. As a result, we may have failed to see the forest for the trees; to see the big picture from the viewpoint of Sacramento.

On September 12, 2017, the JCFPD Board of Directors voted to remain independent and declined the County/Cal Fire offer. What we ask now is that San Diego County Fire Authority and Cal Fire let us plan our future without interference or disruption.

Facts and experience count. I was employed by the SD Fire Department and worked operations and staff. I went to and worked numerous "County" Mutual/Automatic aid fires. Interacted with CDF aka Cal Fire, and San Diego County Fire Services, now called Fire Authority with big gold badges on their belts. In years past I worked some with the original County Volunteers. Some of these new titles and changes I don't particularly like. When I worked a major County fire with Echo 3 command and communications or on an Engine, I was flatly told by some CDF firefighters that CDF Operations try to work a fire a minimum of 3 days for forthcoming budget reasons. I also saw CDF assigning their units at the head of the Fire where control of how and where it would go. This is all hearsay so take it for what you want. Under Automatic aid or Mutual Aid or whatever it is now called, your jurisdiction could be left naked and depend upon suppression resources from somewhere else or your garden hose or water tank if SDG&E does not shut off your power. In the case of JCFPD I would be sympathetic to their retaining local suppression if possible.
The county has strong-armed virtually every other volunteer service into giving up their autonomy; unfortunately, it is a simple financial argument. These services are expensive. That is why the ACTUAL county fire departments in our state, L.A., Ventura, Kern, Santa Barbara, etc., spend real dollars on a career, municipal-style fire service model at a paramedic engine level. It is no secret that the financially independent fire districts (Lakeside, Rancho Santa Fe, North County, Bonita) told the county to take a hike. As such, the CFA grabbed the low hanging fruit with promises they could not keep with the laughingly-low level of funding they have committed. The real test will be the response to JCFPD's inevitable request for mutual aid. It is instructive to remember that an effective firefighting force for a typical residential structure fire is 15 firefighters (minimum). We all know how many firefighters are needed to battle even a medium-sized wildfire. The JCFPD is not atypical in its reliance on automatic/mutual aid to safely and effectively fight even routine fires. That is how fire service operations in our county has evolved (in the absence of a regional fire department). Only now, the resources you need are from the agency you just rejected. On a positive note, The JCFPD is in State Responsibility Area (SRA), so Cal Fire MUST respond to fires their. Keep a close eye on how quickly those state resources respond and best of luck!