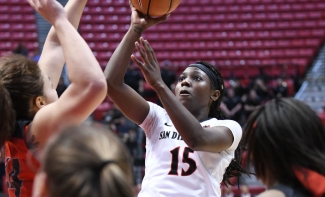 In addition to Fort’s production, which included a team-high eight rebounds to go with a 6-for-12 effort from the floor and an 8-for-9 performance at the free-throw line, SDSU received 10 points from senior Khalia Lark, all in the second period, while sophomore Baylee Vanderdoes tied her personal-best with three blocks.

However, the Falcons’ Kaelin Immel drained two of those triples to key their decisive fourth quarter run, finishing with 12 points along with Cortney Porter, who notched her second double-double of the year with a career-high 14 rebounds, while Emily Conroe topped the squad with 19 points on 8-of-17 shooting.

Collectively, Air Force maintained a 40-30 rebounding advantage and won the turnover battle (15-20), outscoring the Aztecs 16-8 off those miscues.

SDSU trailed by as many as nine points in the first quarter after the Falcons drained three treys on five possessions over a span of one minute and 18 seconds, including a conversion by Immel at the 4:25 mark, which gave the host school a 13-4 lead.

The Aztecs clawed their way back into contention during the second period, as Lark went 4-for-5 from the field, including a pair of three-pointers. Her second make from long range found the bottom of the net at the halftime buzzer, tying the score at 28-28.

The two teams battled through eight ties and five lead changes in the third quarter, with neither side able to build on more than a two-point advantage. SDSU tallied the final two field goals of the frame on layups by freshman Te’a Adams and sophomore Abby Lowe, which gave the visitors a slim 49-47 edge heading into the final period.

The Falcons quickly stole the momentum at this juncture with four straight baskets to take the lead for good. Immel sank those two aforementioned triples, sandwiched around a Conroe layup and a Porter jumper, to put the hosts in front 57-49 by the 5:07 mark of the fourth quarter. The Aztecs registered their lone points of the period a half-minute later on a pair of Fort free throws, but were shut out the rest of the way.

San Diego State returns to action on Wednesday, Feb. 7 when it plays host to Fresno State in a special midweek matinee at Steve Fisher Court. Opening tip is set for noon.