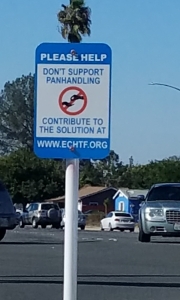 February 18, 2018 (El Cajon) -- The El Cajon City Council on Tuesday continued to address issues concerning the city’s growing homeless population, such as considering signs to direct the homeless to resources.

But the Council was also forced to deal with the aftermath of its decision last fall to temporarily ban feeding of homeless citizens in its city parks, a ban that led to citations by police of homeless advocates who defied the ban.

The ban has since ended, due to sunset language, after the County declared an end to the Hepatitis A emergency.

Councilman Ben Kalasho proposed a proclamation recognizing El Cajon Police officers who he said, “responded with great care and acumen” in issuing citations to local activists who shared food with the homeless at Wells Park before the ban was lifted.

Kalasho said his proposal is about “recognizing and awarding the law enforcement officers who were in the middle of the food sharing fiasco which received international attention.”

He noted that in reviewing cell phone footage on social media, he saw “insulting comments being hurled at law enforcement officers while conducting their job. Not once did they break out of line. They conducted themselves with the utmost respect,” he said.

Since the proposal was not on the Council agenda, Kalasho asked for a discussion to take place among the Council members.

Mayor Bill Wells responded, “First off, we would not be able to do that in order to follow regulations. You can continue to ask to put it on another agenda.”

El Cajon City Attorney Morgan Foley then advised Kalasho that an immediate discussion would be a violation of California’s Brown Act, which codifies public meeting procedure and requires public notice. “The Brown Act doesn’t allow us to do that without it being properly agendized,” he advised.

Kalasho then asked members to vote on putting the proposal on a future agenda. “Then the motion is on the table to award the officers who were there that day…I want them to know that I have their back.”

Wells offered an opportunity for public comment, but there was none.

Kalasho asked to have his proclamation seconded by another Council member.

Wells stated his opposition to the motion. “I’m really uncomfortable in politicizing this,” he said. “This whole thing should have never been political and it has been political. It needs to calm down and not be political anymore. I don’t want to be involved with that. I absolutely support the police and what they do. They know that. I don’t think we need to do this today because it sets a wrong precedent,” the Mayor added.

Councilmember Gary Kendrick echoed Wells’ sentiments. “I think this is a political stunt. I think there were people that day who believed in what they were doing and I don’t want to rub their nose in it,” Kendrick said of the activists. “So, I’m not going to support this.”

Councilmember McClellan said, “I agree with you on this,” adding that the proposal “needs to die.”

Kalasho’s sole support for the measure came from Councilmember Steve Goble who has often been at odds with Kalasho.

“I have a different opinion,” Goble said. “I think it is about merely to put it on an agenda for a future discussion. I haven’t seen the wording of the proclamation to see if it’s political in nature, but it is just expressing appreciation. I’m reserving judgement on the proclamation pending the wording,” he said. The item was rejected by a 3-2 vote.

Discussion then turned to another facet of El Cajon’s efforts to provide assistance to local homeless citizens and whether the city is doing enough to curb and address the problem.

The spotlight once again turned to Councilman Goble. He stated his belief that the city is doing more than most cities in San Diego County. 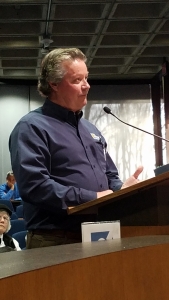 “The communication of how we do that is always evolving as we are learning and experiencing things, in particular, how we do the signage,” he said referring to anti-panhandling signs. Goble added that the key message is for people not to give money directly to panhandlers, but instead to donate to the East County Homeless Task Force “so we can channel those resources” to get support for homeless people.

Goble said that he would like to see the message on the signs be changed to reflect those who need help as well. “It might be ‘Need Help?’ We’ve got these wristbands we are passing out to people experiencing homelessness.” Another new message might be to use the text from the wristbands on the signs, he suggested.

Homeless activist Mark Lane told the Council that he has committed himself to getting additional funding for the signs. “Don’t let money be a part of the discussion, because I’ve already committed to getting this to happen,” he said.

Lots of “Idea’s” abound, not the problem. It’s “Action” that is lacking. Interesting how so many despise Big Government and the Beuracacy that rides on its back. County Supervisors sat on Billions for years atop their thrones and watched as this issue grew into a grotesque disease to the point that everyone is impacted in some way and so many of us can’t even find the time or interest to study the Candidates, get off our asses, and vote.

I would like the city to make resource informational flyers available to the public who would like to distribute them in lieu of money. One could pick them up at city hall. I know the police have them, why not the rest of us? These should be available for businesses as well, so they can hand them out to homeless people where they tend to hang out and congregate. Maybe this will discourage them from becoming a nuisance to customers - panhandling for money, smoking, annoying actions, conning people, etc. I for one do not understand how these folks can be truly hungry when they are eligible for $180 per month on an EBT card to purchase food, even at fast food establishments, plus there are many assistance places feeding them as needed such as East County Transitional Living Center. Clothing, sleeping material I get, yet the concept that they are hungry? Not so much. Don't misunderstand, I have empathy for those who are in this situation (been there myself back in the day when there was no social services help) I just fail to see this particular issue, in fact, I would like to see places where permanent or semi-permanent camping areas could be established like other cites and states have done. This will help get these human beings off the streets in a location where social service agencies can help them in a more productive manner. Doesn't need to be fancy, just somewhere they can sleep (in tents), wash clothes, shower, get medical attention and so forth. Something needs to be done because homelessness is a growing, fact of life and many of us could find ourselves in the same predicament some day, be it to a financial crisis, unaffordable housing, or natural disaster. Any other ideas out there?