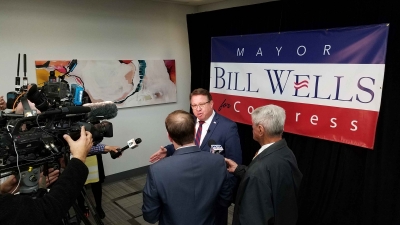 Flanked by family and friends, Wells, a Republican, chose the Ronald Reagan Community Center in downtown El Cajon to announce his candidacy.

Reading from a pre-written statement, Wells said that he can bring conservative values to Washington, D.C. “My reputation as a leader and a problem solved has led to incredible business growth and prosperity for my community,” he stated. 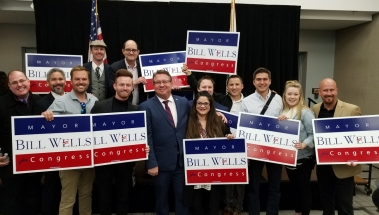 "My dream is to serve the people of the 50th with honor, dignity and hard work. I know that I face a strong incumbent and I'm up for the change," Wells told a room of journalists and well-wishers. "I might be the least likely person to run for Congress. I was not born into a wealthy or politically powerful family. I did not go to Ivy League schools — I have in no way the right pedigree to run for Congress,” he said, then enumerated his conservative values.

“Here’s what I stand for: limited government, the Constitution, the sanctity of life, property rights, a strong national defense and a secure border.”  He added, “I will dedicate my time in Washington, D.C., to reducing the national debt, rejecting tax increases, and unburdening workers and small business owners to realize their full potential.”

As a mental health professional with a doctorate in psychology, Wells also pledged to serve what he characterized as an underserved community. “I’ve also spent my life working with the mentally ill. I feel that Washington has ignored this issue for far too long now. This is also encompassing the massive associated problem of drug addiction and homelessness. I believe I can help the 50th Congressional District be recognized at the national level for the positive important changes we can enact.”

California’s 50th Congressional District serves more than 730,000 constituents and stretches from Temecula to El Cajon and east to the Imperial County line, including 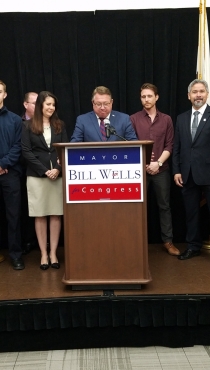 While Wells may not have established wealth or family political connections like Hunter and his father, the former Congressman, Wells has been involved in local politics for nearly two decades, first as an advocate for a hospital employer on a local and state level.

Wells has also served as President of the Grossmont Union High School District’s Proposition H Bond Committee and was appointed to the San Diego Association of Governments (SANDAG) board of directors.

As Mayor, he’s drawn praise for leading the city through tough economic times, bringing new car dealerships into El Cajon to raise the tax base, and for overseeing approval of a deal just reached with Live Nation to reopen the East County Performing Arts Center.

He’s drawn controversy for a temporary ban on feeding the homeless in public parks during a hepatitis outbreak and for leading opposition to California’s sanctuary state measure that aims to protect undocumented immigrants.

Wells says of Hunter, “I know I face a strong incumbent, and I am up for the challenge.” 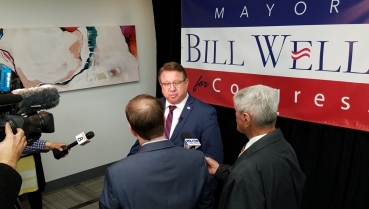 A recent article published on the Politico website was headlined, “From Fallujah to FBI Investigation: The undoing of Duncan Hunter.” The story includes new details on allegations of the Congressman’s misuse of campaign funds, substance abuse, adding that “his freewheeling Washington lifestyle is coming under scrutiny” as it chronicles the unraveling of Hunter’s reputation and power in Washington DC.

According to local political pundits, with perceived political blood in the water, other well-known local Republican politicians such as former San Diego City Councilman Carl DeMaio and current 49th District Congressman Darrell Issa are also rumored to be testing the political waters in the 50th District. The filing deadline to run for the June primary is March 9th.

Having multiple prominent candidates in the fray could produce a lot of heartburn for the local Republican party, and some have speculated that Hunter could be pressured or choose not to run for reelection.

Hiowever, late on Tuesday, Hunter issued a written statement touting his background as a former United States Marine and made clear he intends to run depite Wells' candidacy and the FBI investigation into misuse of donated campaign funds on lavish personal expenses.

"I'm a Marine who was elected to represent my constituents in Congress. Wells and others are politicians," Hunter stated. "Politicians are constantly running for higher office, that's what they do. I fight for my beliefs and principles every day, and that's what I will keep doing no matter how many politicians run against me."

Nevertheless, according to Wells’ campaign statement, the conservative Republican Mayor “has been endorsed by more than a dozen notable elected leaders, including Mayor Steve Vaus of Poway and Mayor Richard Bailey of Coronado.”

Wells is not ashamed that he grew up in an atmosphere where he would be least likely to succeed.

He said at his press conference, “My announcement is not unlike that of so many other Americans. My family legacy was to be an alcoholic, to struggle for every dollar and every single meal, to never realize my potential. That was the destiny of my father. I was eight years old when a police officer came to the door to tell me my father had taken his own life, finally losing his battle with alcoholism.

Wells’ work career starting out with a San Diego Union-Tribune paper route in the Rolando neighborhood of La Mesa, rising to working at a Jack-in-the-Box fast food outlet when he was 16. It was during high school that Wells said he had “his first dream of a way out: college.” But that did not turn out to a bed of roses either, with his first marriage ending with a divorce and he lived as a single dad with sole custody of two young children in a studio apartment.

“I worked the graveyard shift at the hospital,” he said. “A neighbor would come and sleep at the house with the kids when I was working in the hospital. In the morning, I would relieve her and the kids would wake up and want to start playing. I would stay with them all day until the afternoon, when I would try to get them to take a nap.”

Wells recalled meeting his current wife, Bettie Wells, a therapist, at a church gathering, and feeling torn trying to gather the muster to ask her out on a first date.

“Knowing my situation was difficult and wanting to ask her, out I devised a strategy and decided to be brutally honest with her. Before I asked her out on a first date I told her, ‘You have to understand that I have two kids and have sole custody. I work at night, so I never sleep, I don’t have any money, and I live in a studio apartment with my two kids. And I have a car which is a Ford Escort which doesn’t go faster than thirty miles an hour.’ But even after hearing that, she decided to go out with me -- which basically makes me blessed and makes her a saint.”

He concluded his remarks by stating, “I’ve fulfilled many impossible dreams -- achieving a doctorate in psychology, starting my own behavior health services business, and getting into public office.”

Can incentives be initiated for apartment owners to keep rents reasonable for the poor, especially seniors? Is there a viable way to quickly build more low cost senior housing in El Cajon? I would like to see pedestrian walk signals lengthened to a minimum of 60 seconds for 4 lanes, and preferably 90 seconds to cross 6 lanes. The average time allotted now to cross 4 to 6 lanes (plus turn lanes) of about 30 seconds is no enough for some of us. Can the police be more pro active in ticketing speeding vehicles, enforcing the laws regarding excessively loud / modified exhaust systems on vehicles, and ticketing drivers who play their stereos with extreme heavy bass? Will the city be willing to bring back the red light intersection cameras (I see 2 to 3 cars blatantly running red lights on a regular basis? Many so called accidents could be prevented. Can something be done to truly enforce the no smoking ordinance, especially at major events downtown, at restaurants and in front of stores, particularly downtown? Self governing by smokers is clearly not working. What exactly is the city of El Cajon leadership going to do in resolving the chronic, ever increasing homeless situation long term?
Nothing was mentioned regarding the much needed assistance for poor people. Working class and seniors on fixed incomes in particular, need much more affordable housing (below market value apartments) to remain viable in this community. Rents are continuing to escalate at least twice par year, and even with section 8 assistance (housing vouchers) it's quickly becoming unaffordable to live in San Diego county, even in cities such as El Cajon where it used to be rent reasonable. Is any politician ever going to truly resolve the glaring inequities between the wealthy and poor? We are struggling on a daily basis, please help.

We hope to interview Mayor Wells soon on a wide range of issues, and will include a question on poverty. We'd welcome ideas from other readers on questions you'd like to see asked of Wells and other candidates running for the 50th Congressional district seat.