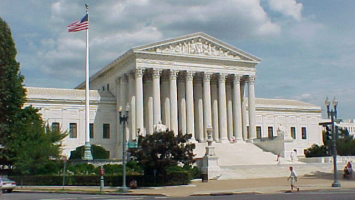 The court declined to overrule a lower court’s action that temporarily blocked ending the Deferred Action for Childhood Arrivals program on March 5.

The program, which allows immigrants brought to America illegally as children to live and work in the country, was terminated by President Trump last year, leaving it up to Congress to pass permanent protections.

The case now goes to the 9th Circuit Court of Appeals on the West Coast. “It is assumed that the court of appeals will proceed expeditiously to decide this case,” the Supreme Court said.

Congress has been negotiating permanent protection for the Dreamers, but has been unable to reach an agreement. Trump has called for protections to be coupled with funding for his proposed border wall and changes to the immigration system.

The San Diego Regional Chamber of Commerce has said that deporting San Diego’s Dreamers would be disastrous for the local economy.

OK, just for the record, what number of illegals do Democrats/liberals want admitted to the United States? I mean, no matter what limits anyone tries to put on the influx, liberals always have an excuse as to why the particular limit is not valid (e.g. "They're veterans." or "They're upstanding citizens." or "We don't want to split up families." , etc., etc., etc. ) So, tell us all....when, if ever, does it stop? Or, is the truth what we all suspect; that Democrats/liberals want enough illegals to be admitted so that every single elected office in the United States is held by Democrats/liberals....voted in by the grateful illegals and/or their relatives? If that is not the case, then tell us.....WHAT IS THE LIMIT OF ILLEGALS?

The rule of the law and the right of the People to be safe and have secure borders is sane and is NOT racist, is NOT some made up phobia and is NOT meaning people are lacking in compassion.
You are correct the dems have kept blacks down for a long time, now they need a new demographic
Look at the mayor of oakland, the murders and crime from citizens isn't enough , so lets import more

Why the sudden hatred toward immigrants?

Here's a bit on my family tree.  Some came fleeing the Nazis; their relatives who couldn't escape died in Nazi concentration camps.

One came here as a stowaway on a ship at 11 years old, after watching sodliers burn in village in a pogrom in Austria-Hungary.

One escaped starvation during the potato famine in Ireland; he came here and became a boxer at first as as a young man.

There's also some Cherokee Native American blood in me; and we all now how the so-called "Americans" abused the Cherokees on the Cherokee trail of tears, where many died and all were forced off their lands.

And yes, I have a branch that traces back to the founding fathers including Patrick Henry of "give me liberty or give me death" fame, as well as some pioneers who crossed the west in covered wagons and a grandfather who lost everything in the Depression.

Why do you think immigrants who came here and built good lives for themselves are any less deserving of the American dream than others fortunate enough to have Mayflower ancestry or whatever else?

The people coming today are just as in fear of their lives, safety, and a safe future for their children -- fleeing drug gang violence in central America and Mexico, terrorist bombings in the middle East, starvation in parts of Africa, and so on.  America has also been welcoming up to a point -- quotas per year on immigration is one thing; totally barring all immigrants or worse, seeking to deport those who have lived law-abiding lives here for deacdes and kids brought here as young children is cruel and downright unAmerican in my book.  With  your attitude, I would never have been born. And yes, there were anti-immigrant sentiments throughout our history with every wave of immigrants including the Irish, Italians, Chinese, Vietnamese, etc.  And every generation has contributed positive things to our society in the end.

And I hope these innocent kids remain so. They were brought into this country as very young children having no choice in the matter. There's absolutely no reason for deporting them. I know a few, and they have become upstanding citizens, working hard and paying bills. In fact, many perform jobs which many others refuse to do. I agree that they stay - permanently.