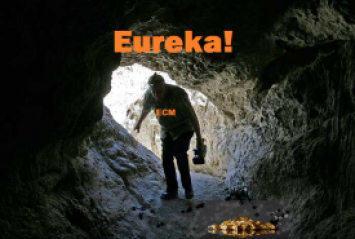 You see, Pegleg Smith was my ancestor, along with his mistress, Peggy, my namesake. She was a saloon girl in San Francisco, where Pegleg spent his final days. Hence me my nom de plume, Peggy Leg (I’m a writer, you see), to carry on Pegleg’s leg-acy.

After he passed on, my ancestor Peggy kept a few of Pegleg’s belongings for sentimental value. She never believed his tales of lost gold, but she loved him all the same.

His belongings were handed down generation after generation. That old wooden leg of his gathered dust on my bookshelf for years, until one day it was so termite riddled that it just wore clean through.

I peeked in side and lo and behold, I found a piece of parchment paper glued to the inside.  I pulled it out and discovered a treasure map. No, not the same as those bogus maps Pegleg sold to dupe those fools who paid for it. This one looked like the real deal.

Seeing as I write for East County Magazine, I confided in my editor and we organized an ECM expedition to go retrieve Pegleg’s lost gold, which he’d stashed in a mud cave deep in the Borrego Badlands.  Of course it’s nowhere near any three bluffs that others searched for in vain--that was just a tale he made up to keep others from finding his cache.

There’ve been some earthquakes that have caused a few landslides out there, and those mud caves can be unstable. So we started with ground-penetrating radar to pinpoint the location. It confirmed that a fortune in gold lay just below the rubble blocking the cave's entry.

We brought in a friend with spelunking skills to lead us into the mud cave, where after clearing away those fallen rocks,  we spotted something glistening.  Lo and behold, there was Pegleg’s long-lost gold!

It took a few trips to haul it all out and get it assayed, confirming that the stash is worth a over a hundred million dollars.

I set aside five million for myself to retire in style—did I mention I’m marrying that handsome spelunker fellow?  We anticipate a lifelong honeymoon traveling to the far corners of the globe.

But I’m approaching my twilight years, with no kids or grandkids to pass on all that wealth. So I’ve donated the lion’s share of Pegleg’s fortune to East County Magazine, to fund their local investigative reporting in perpetuity. Good reporting is worth its weight in gold!

You should have connected the story to the Pegleg Mine in Jamul.