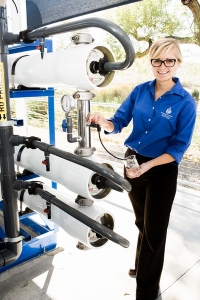 May 1, 2018 (El Cajon) -- Nobody can escape from death and taxes. Add to that, if you live in Southern California, there is no way to escape the inevitably of a water scarcity during an extended drought, earthquake or other disaster.

In a bold and decisive move, the City of El Cajon City Council has taken a major step by unanimously approving in a 5-0 vote a $500,000 investment towards an ongoing advanced water purification project being advanced by the Padre Dam Municipal Water District. The goal of the Padre Dam’s project is to lessen El Cajon and East County’s dependence on the Metropolitan Water District water resources in case of a natural or other disaster that might threaten water supplies to city residents. 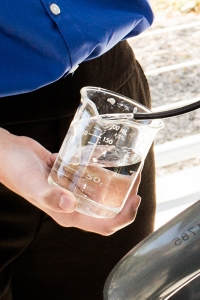 Gabriela Dow, a public relations consultant to the project, told ECM, “What would happen if the water pipeline that we rely on were damaged in an earthquake?” That is just one example of the type of questions that led these program partners to come up with long-term plans and solutions to secure East County’s water reliability and establish more water independence for the region.

The Padre Dam is a significant provider of water, sewer, recycled water and recreation services to approximately 100,000 residents in East San Diego County including Santee, El Cajon, Lakeside, FlinnSprings, Harbison Canyon, Blossom Valley, Alpine, Dehesa and Crest. The District currently imports 100% of its drinking water supply and treats two million gallons per day (MGD) of wastewater at its Water Recycling Facility. Once completed, the projected full-scale water recycling program would be set to produce up to 30 percent of East County’s current drinking water demands and reduce dependence on imported water.

According to El Cajon City Manager Graham Mitchell, the money now being invested by the city (along with the County of San Diego and the Helix Water District) will go towards the second phase of the project which is a continued study to determine the fiscal viability of the project.

“Ultimately, about a year from now, we will have a definitive yes or no whether the project is viable. It is an opportunity for us to find a cheaper way to treat our water or sewage, but also to create a future water source,” Mitchell says. By contrast, the cities of La Mesa and Lemon Grove are not participating in the project. But should the project go forward they will experience higher water rates,since portions of La Mesa and Lemon Grove receive their water from Helix Water.

The County of San Diego has contributed half-a-million dollars in the project along with Padre Dam’s contribution of $2.5 million.

The Padre Dam Water Purification Project is already being utilized and tested on a small scale as a part of the ongoing feasibility program of the Advanced Water Purification Program. Since March 2015, the pilot program has produced approximately 100,000 gallons of purified water each day. The water treated at the demonstration facility is not being distributed into the drinking water system, but instead is being reused in the recycled water system. The purified water produced at the demonstration facility is tested daily to ensure it meets the public health objectives to earn approval from the State Water Resources Control Board’s Division of Drinking Water. Regular open public tours of the facility may be scheduled by contacting the project at info@EastCountyAWP.com or by calling 858-385-2240.

Currently, some 120 entities along the Colorado River discharge some treated water back into the river, says Allen Carlisle, General Manager and CEO of the Padre Dam Municipal Water District. “Those who are discharging along the Colorado River number some 120 discharge permits. That story alone tells our region we are already drinking recycled water. That water is not being treated to the advanced level that we are talking about here in our program,” he said. “Our program will take this water into four additional treatment processes. It will be blended with surface water from Lake Jennings using standards established just last month by the State of California. We are producing water that is highly clarified, clean, and purified source waterrather than using water from the Colorado River,” Carlisle continued.

During the presentation, El Cajon Councilman Gary Kendrick pointed out that eventually the project could net $10 million a year savings in water costs.

“It seems to me that there is a potential savings of ten million dollars a year by the year 2038,” he said. “The city could end up being pretty thirsty. I like the idea of getting 30 percent of our water being reclaimed so we are not being held hostage by the Metropolitan Water District,” Kendrick continued, adding that local control is important.

Carlisle said that the cost of the water produced by the advanced water project will be a bit higher than the $1700-1800 per acre foot of water now being paid to import water from the Colorado River via the Metropolitan Water District.

“We’re paying for reliability and local control. I do know that important water costs are going to go up. They are being delivered by systems developed in the 1900s. This water will be locally controlled, it will travel ten miles vs. 600 to get to our customers. From that concept is why began pursuing this idea so aggressively back in 2014,” Carlisle said. 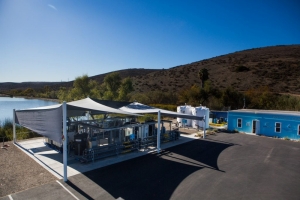 Local community activist Bonnie Price expressed her support for the project. She stated, “I like the idea of the city getting more control over its water.” She added, “There are some terrible actions being taken by people from around the world buying valuable water sources...The more you can do to control your water source, the better you are,” she observed.

We Pay more for water than a Gallon of gas. And as desert folks we are in lack of such resources per press and Gov. So we buy BOTTLED WATER, Convenient sure... I carry it in all my vehicles as it is a source of life. I see stranded motorists on the side of the road during summer. They thought they were going (AKA Down the Hill to Walmart) they head back and just about by the Curve up the 8 Bang no Cell. The Car bites the dust No AC nothing ...It's one of the those 120 type days of pure heat off the HWY... They can't stay in the car so they stand out side... No Shade car's are going 75 plus right by them. In death valley No chance death in 20 mins. Always Carry bottled water in your car! If not for yourself but also for others, even if it is Purified! :)
The water in bottles in stores are not coming from the bubbling pool of life, it could be yes as some be leave that...I can Buy a filter that would let me suck water from a muddy pool of dirt. And be fresh!!! Listen it's going to plainly we have to start drinking our own pee.... Get over it the Astronauts do it everyday? They seem fine? Lets drop the Purified Water Crap... They want to sell you're PEE back to you... So What! Sorry

into drinking water at Santee Lakes.

What is Purified Water? Water purification may sound simple because it is just what it claims to be: the process of purifying water, or removing what isn’t wanted from water. Like filtered water, purified water methods can remove harmful contaminants, but some purified water systems use chemicals like iodine or chlorine in their water-cleaning processes, rather than eliminating them. Additionally, some water purification systems like reverse osmosis remove beneficial minerals like magnesium and calcium. Purified water can also be a tricky beast because it is used to define several types of water such as distilled water, deionized water, and even filtered water! But as you can see, certain processes of making purified water can be quite different than how filtered water is made. You look at were the water in bottles you drink and buy from the stores... It mite not be reclaimed But???? How do you think the water agencies are making there money now? Lets put maybe reclaimed in real small print and call it Purified! hallelujah! Our planet is Saved!!!
I'll continue filtering tap water at home with a faucet mount unit because I don't fully trust water quality as it is. The water which now comes out of the tap has a strong chlorine smell and taste, and that is not good. I can visualize human error at one of these treatment facilities ruining what precious little water supply we have after it gets treated and injected into an existing aquifer. Can every molecule of carcinogenic compounds be filtered out with this new technology? I doubt it. What about every day products that are flushed into toilets every day such as pills, cleaning products, etc.? Diseases are another thing we must think about. Playing with an unknown long term situation here. Cause and effect will be forthcoming. In depth scientific studies have shown that not everything can be filtered out of recycled water (aka toilet to tap). I think this is a huge mistake. Why not start with banning lawn watering? - the largest single water consuming item. That would instantly save massive amounts of potable water.