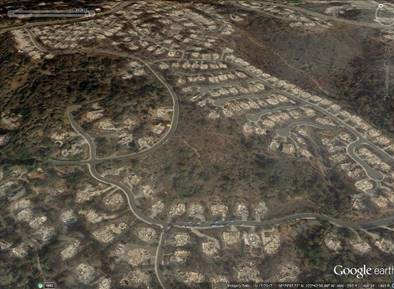 Twelve recommendations to protect communities from wildfire, based on science and needs of our families and greatest risk

By the Chaparral Institute

Photo: Devastation of the Fountaingrove II community in Santa Barbara during the 2017 Tubbs fire was predictable. The area had burned in 1964 and the city was warned by its own planning department that the area was too dangerous to build homes in, but development was approved despite not following general plan guidelines.

May 17, 2018 (Escondido) -- The lead purpose of Governor Brown’s Executive Order of May 10, 2018 is to “Protect Communities from Wildfire.” The order emphasizes that “eight of the state’s 20 most destructive fires have occurred in the past four years.”

Unfortunately, the Order’s key elements will do little to protect communities at the greatest risk of destruction because the focus is on the wrong place – forests. The most devastating wildfires cited (including the Thomas, Tubbs, Nuns, and Atlas Fires) were many miles away from such forests. And while it is reasonable to remove hazard trees immediately adjacent to roads and homes, it makes no sense to spend millions of dollars to treat entire forests while the actual fire threat facing thousands of families occurs very far away from these forests.

We must address the conditions that are actually causing so many lost lives and homes – wind-driven wildfires and the embers they produce that ignite flammable structures placed in harm’s way by local planning entities. Failure to do so will only result in continued losses.

The current approach sees nature only as “fuel.” Eliminate the “fuel,” the thinking goes, and we can control the fires. Consequently, millions of dollars are spent clearing habitat and removing dead trees which frequently lead to creation of more flammable landscapes. As evidenced by the 2017 wildfires, the wildland fuel approach is failing us. The current approach is equivalent to trying to prevent earthquakes.

The California Chaparral Institute, in collaboration with many fire scientists and land managers, has assembled twelve recommendations* based on decades of research to help us learn to live with wildfire instead of thinking we can control nature. We must look at the problem from the house outward, rather than from the wildland in. It’s our neighborhoods that are burning, so we must first make existing communities fire safe through retrofits, then ensure future developments are not built in fire corridors like those destroyed in Santa Rosa and Ventura during the 2017 wildfires.

The views in this reader’s editorial reflect the opinions of the author and do not necessarily reflect the views of East County Magazine. To submit an editorial for consideration, contact editor@eastcountymagazine.org.

Travis Lyon and the majority on the Alpine Community Planning Group must be stopped from their development plan for Eastern Alpine.
Very informative article (the pdf) which makes a lot of sense to me, and is doable.