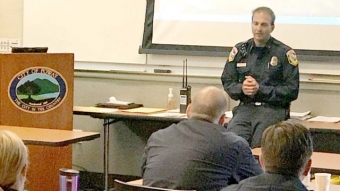 Plus an Indian claim to fire station land.

In April, the Julian-Cuyamaca Fire Protection District board voted to begin the process of dissolution — turning its property and staff over to the San Diego County Fire Authority and Cal Fire’s San Diego Unit. Both are led by Chief Tony Mecham.

That could take months, involving the San Diego Local Agency Formation Commission, or LAFCO, and possible public votes in the apple-pie mecca one local calls the “Mayberry of San Diego County.”

But Jeremiah “Jeremi” Roesler, a 51-year-old Temecula resident, will be on the hot seat immediately as he leads a 54-member volunteer force fearful of what some are calling a “hostile takeover.”

“I’m getting all kinds of questions from the guys, saying: ‘Well, Chief, what do we do? Because the fire chief’s not answering those questions,'” said veteran Julian fire Battalion Chief Mike Van Bibber, referring to Marinelli staying mum.

“My boss … is very adamant that we [volunteers] need to go away,” he said of Marinelli. “He has ceased to communicate with all of his officers for the last several months.”

According to the separation agreement he signed March 20, part-time Chief Marinelli is retiring with a severance package that includes $26,400. It required him to “use his best efforts to recruit” a new chief.

Marinelli didn’t respond to requests for comment, and Roesler — whose hiring as chief wasn’t confirmed by a county spokeswoman until Tuesday — also was unavailable for questions.

Last week, before leaving the country for six days, Chief Mecham told Times of San Diego that a Cal Fire unit will “sit side-by-side with the fire engine staffed by the volunteers along with the ambulance and the county reserves, and we’ll basically all respond to calls together.”

The elected five-member board will stay, he said, and “they still keep their authorities.” That’s spelled out in a board-approved interim service agreement.

Mecham acknowledged that Julian residents are “very vocal” — including those who in eight days gathered 329 petition signatures urging the fire board to resist county efforts to absorb their 34-year-old, 4,000-resident district.

(The county has no fire department. It contracts with Cal Fire for unincorporated area protection.)

“I respond daily to items and issues that are just completely false and without any factual basis,” Mecham said in a phone interview. “So I just reached a point where we’re just going to respond through counsel and make sure that we present a very clear picture of the facts.”

Facts are in dispute, however.

Mecham testified May 15 before the county Board of Supervisors that the Julian fire board had twice turned thumbs down on dissolution. Julian critics say it was three or four times.

Mecham told the board that Cal Fire, on average, responds to nearly 600 calls a year in Julian, and out of those, “597 times we’re getting there well within our established response times.”

Critics scoff — and insist that Cal Fire’s response time is worse than Julian’s (sometimes on account of lack of familiarity with area geography). They swap horror stories of Cal Fire crews getting lost.

County officials contend that Julian’s finances are in dire straits — a district limping along on a $50-a-year fire fee passed in 1984 plus, until January, a $60,000 county subsidy.

County spokeswoman Alex Bell said via email that the service agreement would boost “the current level of fire and EMS service to Julian residents and visitors by adding full-time professional firefighters and a paramedic fire engine to the community.”

Van Bibber suggests that a “secret” plan hatched by LAFCO and the county said that once all 20 rural fire agencies came under the county umbrella, “they could start asking for taxes and fees.”

“Once we go down, if we go down, it is going to affect every property owner in the unincorporated area of the county,” he said. “Every one of them.”

But most galling to the battalion chief and others was a form that Chief Marinelli submitted to LAFCO that said the Julian station is staffed by “O daily” volunteer firefighters.

“I have seven people on duty at the firehouse right now,” Van Bibber said Friday. “I have a duty chief assigned today as a supervisor. … We actually have a duty roster where people are assigned days to work. Just like any other fire department.”

“Go look at the station logbooks,” he said. “They’ll show you who’s been there every single day. And we send that report into Monte Vista, the Cal Fire’s dispatch center, [which] sends us on calls. They get that information daily. It’s emailed to them every morning.”

Van Bibber, 52, disputes the image of volunteer firefighters as local yokels who jump into their pickups to respond to a blaze. In fact, they attend a fire academy and train for 70 hours.

“To be very blunt, there are members of my department that I would put up against anybody I worked with down in the city,” he said. “They’d hold their own just fine.”

“It’s all lies. Every bit of it,” he said. “It’s very sad. You put your faith and trust and confidence in a board and a fire chief to do what’s best for the community. And you find out they lied. Ugh. It’s brutal.”

He has filed lawsuits on behalf of several volunteer firefighters and their association. They seek to halt the dissolution — or at least force a redo board vote.

Sherman argues that a May 8 Julian board vote on the county deal to insert Cal Fire crews into the Julian station should be voided because it wasn’t properly “noticed” — that the public wasn’t made aware that the board would take action. Only hear a presentation.

On May 15 — just before the Board of Supervisors voted 4-0 to forward the dissolution request to LAFCO — Judge Kenneth Medel in San Diego Superior Court rejected Sherman’s “emergency stay” motion to block the deal.

Sherman will try again with Medel. Southcott vs. Julian-Cuyamaca Fire Protection District will be heard at 10:30 a.m. June 8 in Dept. C-66 downtown.

But looming large is a stickier issue: Who owns the Station 56 land if the Julian district melts away?

Although Elliott declared KDLC wasn’t taking sides on the Julian dissolution, he said the conservancy hadn’t been approached by the county, LAFCO or the district regarding deed issues.

“I strongly suggest that the parties meet to discuss the county’s future interest, if any, in the property where the former fire district station resides,” he said.

East County Supervisor Dianne Jacob replied: “That definitely will be an issue that the staff will need to look into and work with you on.”

(The county’s Bell said: “We are very early in the LAFCO consolidation process, which is when issues including property ownership are negotiated.”)

Near the end of the 32-minute hearing, local LAFCO executive Keene Simonds said it would take at least 60 days for his staff to review the Julian application. Then the commission would hold a hearing.

“Every landowner, every registered voter, within the [JCFPD] boundary is going to get a letter from my office saying: ‘At this day and at this time LAFCO is going to consider the potential dissolution and transfer fire protection to County Service Area 135.‘”

If LAFCO approves the plan, Simonds said, the public gets two more chances to weigh in — first at a “protest hearing” within 60 days and second in a possible referendum. If enough district voters submit a form opposing the fire handover, “they will vote on this. Straight up or down.”

But under state law, another option exists. If at least 50 percent of registered JCFPD voters protest the change, it’s killed.

Cal Fire Chief Mecham is aware of this, but deferred to county lawyers and LAFCO for comment.

It was only 10 years ago that the county, following two major wildfires, set out to consolidate nearly two dozen special districts and volunteer fire departments under one regional umbrella — the county fire authority. Supervisor Jacob said the county has spent close to $500 million to improve fire-protection in the backcountry.

“The Witch Fire is said to be the catalyst for this grand plan,” he said. “So a wildland fire that the state agency in charge of wildland fires could not handle is now the reason for putting that same agency also in charge of structure fire protection, further insuring that in the next Witch Fire, both wildland and structure fire protection will be poorly handled, and the abandonment of the outlying areas such as Julian will be all but assured.

“We will be expendable and left with no community/local protection at all,” he said via email.

Now only Julian is left to consolidate. Why such a tough nut to crack?

“I don’t want to speculate,” Mecham said. “It is what it is at this point. And I certainly think that the county’s regional offer to spend millions of dollars on fire protection in Julian is the right thing for the community, and I’m not going to comment on the community activism piece.”

But a local charity, the Julian Fire Plugs, tried to explain why Julian residents are hanging tough.

“The community of Julian-Cuyamaca is not a municipality,” says its website. “Rather, it is a large geographical area that comes together as a community through social and volunteer activities.”

It called the JCFPD the most significant bond.

“JCFPD volunteers not only protect this community, they organize a variety of community events,” including high school Fire Explorers, a Community Emergency Response Team, an annual Pancake Breakfast at Lake Cuyamaca and “Halloween Trunk or Treat.”

“Most of us consider Julian the Mayberry of San Diego County — people that live here like it for that reason,” he said. “It’s a lifestyle that used to be.”

It was chilling to read the Julian newspaper editorial by Rick Marinelli. It is in black-and-white how this chief really felt about his volunteers. He has never respected them or stood by them. He never showed up to a call. If the call involved serious injury or death he never asked the volunteers how they’re doing. This piece he wrote describes perfectly how he feels about them, Honestly with all the uncertainty and turmoil in Julian, it is safer now that Marinelli is gone.