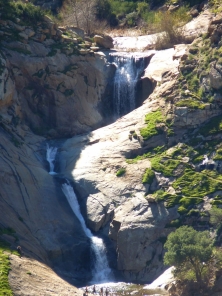 Reed was hiking with a friend when her friend saw that she had become dehydrated and hypothermic. Reed fell into bushes and a bystander called 911, the Medical Examiner's report states.

Sheriff’s deputies responded to a call for help from Cal-Fire at 5:49 p.m. . Medical personnel along with deputies and a Sheriff’s helicopter arrived to find the victim was deceased, Sg. Chris Galve reports.

The County Medical Examiner will conduct an autopsy to determine cause and manner of death and notify the victim’s family.

The Three Sisters Falls trail is among the most treacherous in the county, accounting for numerous rescues annually as well as past fatalities.

Only experienced hikers in good physical condition should attempt the trail, which is steep in rough terrain, posing particular challenges on the long, steep uphill exit.  Hikers are also advised to carry at least a gallon of water per person, to hike with a companion, and carry a mobile phone with GPS though cell service is not always accessible along the route.

My condolences to the family & friends